On August 9, 1995 Jerry Garcia, guitarist/vocalist and founder of the iconic rock band the Grateful Dead, died of a heart attack in a rehab facility in Northern California. For millions of Deadheads worldwide, this was the end of the Grateful Dead experience. But for millions more, including a handful of incredibly-talented and tuned-in musicians from Long Island, it was merely a new beginning.

From Manhattan to Montauk, Long Island has always been, and continues to be, a hotbed of “Grateful Deadness.” Even while the “world’s greatest jug band” was touring through the area several times a year in the late 60s, 70s, 80s and 90s, Grateful Dead tribute projects like the Zen Tricksters, Roses Cantina and The Electrix simultaneously thrived in local venues—giving people their psychedelic fix during the band’s downtime.

They didn’t know it then, but the cats who were honing their craft in Long Island’s network of dive bars and dark clubs were grooming themselves for the next generation of jam band greatness.

Not long after Garcia’s death, Mattson—who bears an uncanny resemblance to Garcia in every way—got the call to play with Lesh. The run was short and sweet as Lesh moved on to experiment with other lineups. Unfazed, Mattson kept rolling along, continuing the Tricksters’ trajectory towards national jam band prominence, hooking up with Grateful Dead chanteuse Donna Jean Godchaux and eventually taking his current role with the country’s premier Dead tribute project the Dark Star Orchestra.

“When I first started performing Grateful Dead music in Long Island clubs, I had no idea what a hotbed for Deadheads Long Island and the New York Metropolitan area was,” Mattson said. “All we really thought about was how much we loved the music and how much fun it was to play. Apparently there was enough hardcore interest in the Grateful Dead’s music to sustain a band [The Zen Tricksters] that just celebrated its 31st anniversary.”

Mattson sees the entire Grateful Dead/Long Island connection as part of a much larger socio-cultural whole, with New York at the epicenter.

“New York City was a major center for jazz music and beat poetry and generally more experimental art forms, all of which the Grateful Dead’s music represented to the next generation,” Mattson said. “The musicians from Long Island who have continued to be involved in playing this music all these years are the sons and daughters of the Dead’s generation and continue to bring those artistic values into the 21st century.”

Like Mattson, Dark Star Orchestra’s current keyboardist Rob Barraco “graduated” from the Zen Tricksters to the ground zero of the sound. He was an integral creative force in Phil Lesh’s daring and angular Phil Lesh and Friends projects that pushed the Dead’s musical repertoire as far as it’s ever been pushed.

Barraco had the chance to bring it all back home to Jones Beach with two unforgettable three-set shows with The Dead in the summer of 2003.

“[During the acoustic sets] I was sitting at a Steinway piano, on stage with Phil, Bobby and the drummers,” Barraco recalled one recent afternoon before a Dark Star Orchestra sound check at Westbury Music Fair. “And I looked out to see the crowd three sections high packed to the rafters…”

From there Barraco’s voice and thoughts trailed off, his smile saying what words could not.

While Mattson, Barraco and their fellow Tricksters all have a love affair with one of America’s greatest songbooks in common, and while they all have the chops and the passion to lead them to great musical heights, what they truly share after decades of playing together is musical trust and intuition.

“Before we ever met, we unknowingly, individually dabbled and extracted, and some way or another came out with completely aligned attributes,” Circosta said of this local cross section of Dead musicians. “That’s where the telepathy comes in.”

It’s a mind-meld that “starts from the stage and spreads to the floor,” as the song goes. And in the New York/Long Island area, that frequency runs high. Since the Grateful Dead’s early beginnings, their adventurous sound and approach always had a special “home away from home” relationship with New Yorkers. 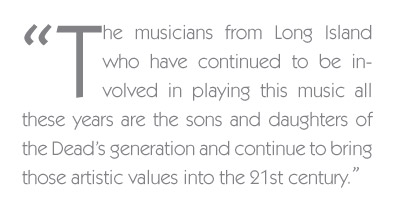 “In New York…they want the sword fighter, they want the juggler,” Garcia himself said to renowned Dead scribe Blair Jackson in a 1988 interview. “In New York, they really want you to sock ‘em with rock and roll. I mean they’re tough!”

That experience and belief was not Jerry’s alone, and that’s the beauty of the scene and the sound. The Grateful Dead’s appeal lies in its polarity. The music is by turns wildly complex yet immediately accessible, galactic in scope but readily touched, tasted and felt right here at home. There’s room on the bus for anyone and everyone, at any time.

Dave Diamond gets to all of that on a primal level. As an ambassador of the pulse and muscle of Grateful Dead rhythm, he knows the swing is the thing; he also knows “Shakedown Street” runs two ways.

“When the whole crowd is dancing, that is the best high for me,” Diamond said. “The scene at Wetlands [a NYC jam band ‘church’ in the 90s] was so magical. The whole place was one big grooving organism. There was nothing better.”

For West Hempstead’s Jeff Pearlman, who founded Rose’s Cantina back in the 90s and now plays keys with The Electrix, that vibe remains in full force to this day.

“Long Island Deadheads are not passive listeners, they are passionate co-conspirators with the musicians,” Pearlman said. “Now that I am on the other side of the experience, I feel this energy from the audience, and it inspires me to heights of playing that I didn’t think I was capable of.”

Like Barraco, Pearlman is also acutely aware of the thrill of sharing this bond with his heroes, and he managed to find the words to express it.

“Over the years, so many of us have had the opportunity to play with musicians from the Dead or to play on a bill with them,” Pearlman said. “It’s truly a dream come true. I think the legacy for all musicians who play this material is that we become links in the chain that carry the vibe and the energy associated with the Dead forward for fans, old and new. As a result, we remain well connected to an energy that’s integral to our life’s force.”
With this attitude and approach, the Grateful Dead DNA is sure to continue its long, strange trip through our local cultural consciousness. There’s no end in sight for the players and dancers alike. And that’s the truth of the Grateful Dead experience. It is both timely and timeless; it can reach across the universe and right into the center of your heart, all in the same flurry of notes.

That’s the essence of the trip. And in the land of the Dead, it’s the trip that matters.

“Gone are the days/we stopped to decide,
where we should go – we just ride.”
—“Crazy Fingers”

Buy music from the Grateful Dead on iTunes

Hear Grateful Dead music and do some hippie spins at these upcoming local shows:

Dark Star Orchestra (with Rob Barraco and Jeff Mattson) DSO is currently touring internationally but they often come back this way. Keep an eye on their website for tour date updates. darkstarorchestra.net