Long Island has powered a surfing resurgence, with the sport reemerging as a major cash cow and tourist attraction from the Rockaways to the Hamptons. Ironically, if not for Southern Californians hijacking the sport in the 1960s, Long Island would be the surfing capital of the entire world today, despite the West Coast’s obviously advantageous conditions. However, the premiere surf company, Quiksilver, happily a Southern California corporation, has taken compelling steps to reestablish New York as “the other Coast” for trendy surfing. Your kids know all about Quiksilver, which also markets skateboards and is a major “casual fashions” line for non-surfers and surfers alike. 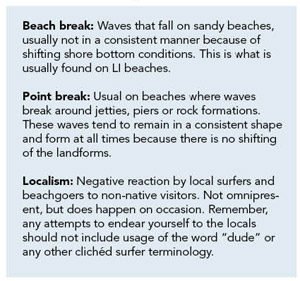 Quiksilver, along with Unsound Surf, a local (Long Beach) surfboard shop, and Vitamin Water, has a three-part surf competition to drum up sales, generate surfing-friendly publicity and expose New York’s lonely surfers to the rest of the world. The first event, called the “Empire State Trial of the Trials,” (which was held last month at Long Beach) culled one surfer Leif Engstrom of Montauk out of the 16 hopefuls in a surf-off among Long Island and New York State natives. Engstrom goes on to another, second surf-off, called the “Quiksilver Pro New York Trials” (slated for September 1-3, again at Long Beach). That’s a competition among 16 more surfers, as judges pick a winner in this later contest and send him/her out to the bigger, million-dollar pursed “Quiksilver Pro New York,” (held September 4th to the 15th and also at Long Beach). This is the third and main event, with a selection from 34 of the world’s best surfers, including the acknowledged leader, Kelly Slater, a ten-time world champion. King Neptune will hopefully cooperate in all of this, as the East Coast is not known for consistently good surfing days, with frequent dry spells of mushy (malformed) waves interspersed with flat days—meaning really small waves. Neither can be successfully ridden by surfers competing for a title, but the sponsors and the ASP (Association of Surfing Professionals governing body) remain optimistic, as good surfers tend to be optimists.

Yet why Long Island? Quiksilver’s CEO Bob McKnight tells Pulse, “We are beyond excited to host the biggest pro surf event in the world on Long Island this September. There has always been a huge contingent of dedicated surfers and surf enthusiasts on the East Coast and they will now get a chance to watch the world’s best surfers in Long Beach. We are also bringing the best and brightest Quiksilver, Roxy and DC athletes to New York City, the largest media arena in the world, for twelve days of surf, skate, BMX, fashion, art and music that will bring incredible global attention to these phenomenal athletes and the action sports culture and lifestyle.” And Kelly Slater advises Pulse that, “When I was young, I remember some great waves on Long Island with my brother Sean and our friends. I’m really looking forward to being in New York. This event itself will be unique and kind of an unknown for us and bringing the ASP tour to Long Island should be fun ‘cause there’s a big surf culture there.” The locals agree.

“Surfing has definitely taken off in the last 8 to 10 years,” says Charlie Bunger, owner of Bunger Surf Shop, curator of the Long Island Surfing Museum, and a veteran surfer since the 1960s. “It’s booming, with a growing woman’s market. I’d say the market is astronomical.” Bunger also acknowledges the long and sometimes fabled history of surfing on Long Island.

Surfing started in Hawaii in prehistoric times, a pastime of kings and commoners alike, with a thick religious connotation. The Polynesians surfed naked, which caught the eye of Mark Twain and Jack London. Clothed by Christian missionaries, the sport was then deliberately popularized by Duke Kahanamoku, the son of a Hawaiian police chief. The Duke was an Olympic gold medal swimmer who made friends with George Freeth, a white “beach boy” who learned the sport in Hawaii.

Then comes the strong LI connection. In their proselytization of the sport, the Duke and Freeth traveled to Nassau County, and rode the LI waves in the years 1920-1935. At this time, wealthy men hired Freeth to teach their Gold Coast sons to surf—the Duke feted newsmen on LI to write surfing stories in their pages. Great Gatsby college “frat boys” took up the sport, investing in surfboards. These wealthy patrons made LI beaches famous for surfing. There was a population of several hundred surfers here, almost overnight. 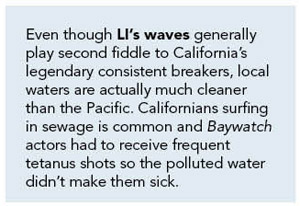 This public relations campaign worked brilliantly. The Duke and Freeth put LI surfing on the map. California surfing was almost a nonstarter—the West Coast style of the sport was unpublicized, unpatronized and underfinanced. The state of surfing in California was meager and marginal, confined to beach bums and lifeguards in back-cove beaches. Meanwhile, LI surfing was robust…and then the unthinkable happened: First the Great Depression, which wiped out the Gold Coast and the Gatsby’s; then the Second World War, which drafted the surfers.

The 1950s found no world war but fewer surfers. Most on LI were married men and married men did not usually surf (don’t ask me why). The California beach bums were discovered and popularized by the movie Gidget in 1959 and the surfing music giants The Beach Boys and Jan and Dean reanimated the sport away from LI. As Gidget and the beach crooners all came from California, the pact was sealed between surfing and California. That is, until now. And Quiksilver.

When Manhattan and Brooklyn Heights empty for the summer, the Hamptons become the vacation center of the elite. And the elite bring surfboards. There’s a reverse migration from Southern California, because the entertainment elite also “summer” in the Hamptons. This brings an over-representation of surfers because the summer water temperature on Long Island is actually warmer than most of California’s surfing beaches. There are two aspects of the surfing sport open to you: Watching surfers and actually riding the waves. There are good and bad aspects of both, sometimes radically good and radically bad.

Watching surfers surf is getting very popular. That’s good news in that gawking crowds are no longer a nuisance. But access is getting harder. With much of LI beachfront going to private development, ritzy private roads, hostile homeowners and arrest-happy condo security guards, hassles are rapidly approaching major nuisance proportions. Other beaches might entail trespassing. Food and beverage (but rarely the alcoholic kind) are growing in presence even in remote areas. We’re talking surfer’s food, which is rather simple: Mexican foods and hot dogs/hamburgers. Not haute cuisine.

Enjoying the resurgence has an added charm because Long Island is dusting off the old surfboards and reopening the musty beach houses. With modern technology, and female participation, surfing has proven to be a vigorous summertime pastime burnishing new glories. And some of these glories are yet to be coined.

Websites devoted to the sport around Long Island are: surfli.com. surfriderli.org, woodyssurfshop.com., surfersinfo.com, bungersurf.com, newyorksurf.com. Some of these feature “surf cams,” which are live, streaming video on the Internet. These take the place of frustrating guesswork as to whether LI waves are worth surfing.

Click Here for an exclusive on how to Get Surfing by John Positano. 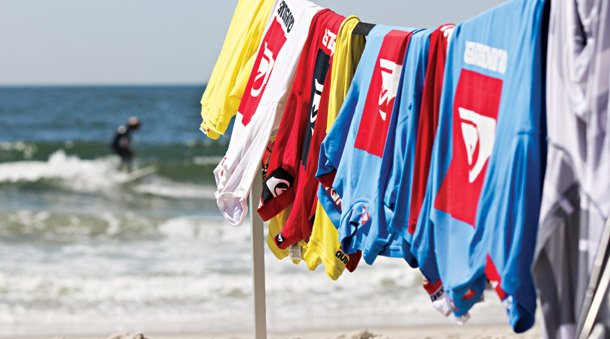