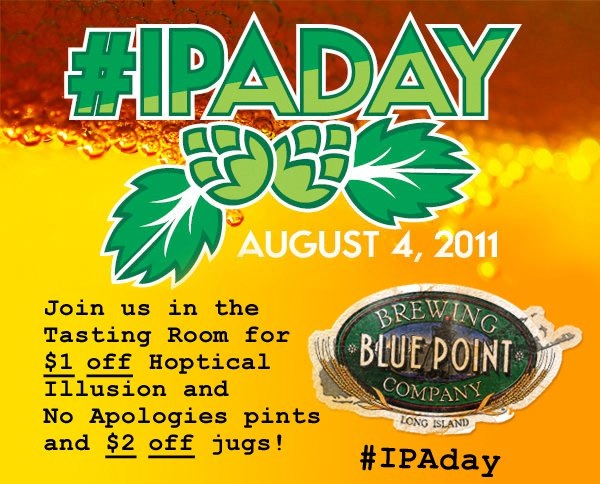 International #IPADay is a grassroots movement created to unite the voices of craft beer enthusiasts, bloggers, and brewers worldwide, using social media as the common arena for connecting the conversation
together.

On Thursday August 4th, craft beer drinkers across the social sphere and across the globe will raise pints in a collective toast to one of craft beer’s most iconic styles: the India Pale Ale. This celebrated style represents the pinnacle of brewing innovation with its broad spectrum of diverse brands, subcategories, and regional flavor variations – making it the perfect style to galvanize the craft beer’s social voice.

To participate, share your photos, videos, blog posts, tasting notes, recipes, thoughts with the world on Twitter Facebook, YouTube, WordPress, RateBeer, Foursquare, Gowalla, Yelp, Untappd or any other social media platforms you may use. Use the hashtag #IPADay in all of your posts and then see what others are saying by searching the hashtag on google, twitter or other social media resources.

Participants are also encouraged to organize “real-life” #IPADay events your local brewery, brewpub, restaurant, bar, home, or office. Share your events at RateBeer.com (note: must be a member to post an event).”