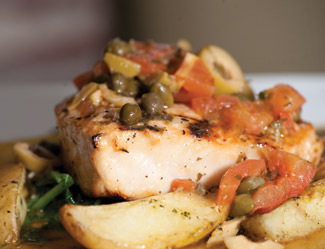 The Hamptons are a bloody battlefield for restaurants. There is no more volatile, competitive area for eating places large or small. They come and go, open and close with bewildering frequency. I have reviewed three, four or five different restaurants over just a few years at the same location. Typical of the genre is the standalone spot at 103 Montauk Highway in East Hampton that has been, over the years, home to Prime 103, J.L. East, Peconic Coast, Dukes and assorted others that have faded from my memory. Restaurants that change their names, menus, chefs and ownership often understandably get a bad reputation.

The new tenant, Beachouse, deserves much more respect than most of these ever-changing, swinging-door operations. I expected to be disappointed, but I wasn’t. In fact, delighted is the best word to describe most of Chef Dennis J. Farrell’s dishes (service is another story, more about that later). Mr. Farrell, formerly of Uncle Jack’s in Manhattan, and owner Michael Gluckman, who also runs the Boathouse and has operated The Lodge and Bamboo, have constructed an appealing menu that nicely balances seafood and meat choices. Then, too, I’d forgotten about the delightful surroundings at this restaurant. It’s a handsome, open, light, airy, multi-windowed place with wide-plank wooden floors, high ceilings and overhead fans. There are two charming, summery, outdoor patio areas and a large private/party room in addition to the ocean dining room.

Unlike so many restaurants, especially in the Hamptons where bone-rattling noise seems to be considered a virtue, that high soundproof ceiling provides a tolerable acoustical level. In other words, diners can hear their waitress, and across-the-table companions, without shouting. 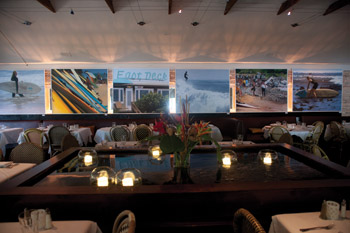 Although entrée possibilities are also seafood dominated, if you are a flamboyant carnivore, there are three prime, dry-aged steaks including a 40-ounce bone-in Cowboy rib eye ($54) and four accompanying sauces. We chose the ten-ounce filet mignon ($38) and found it to be tall, tender and medium-rare as ordered. An assertive, al dente Maine sea urchin bucatini ($26), with a dauntingly-rich, creamy sea urchin sauce starred shaved batarga that’s folded into the pasta’s sauce. A pan-roasted tile fish ($27), cooked with proper restraint, came with a contrasting tomato, bacon marmalade on a bed of white bean purée and a silken white sea bass rested on a platform of confit leeks and parsnip pomme purée.

Desserts ranged from a very ordinary Key Lime pie ($10) to extraordinary homemade chipwich sliders ($10), or four chocolate chip sliders filled with vanilla, chocolate, mint chocolate chip and pistachio ice cream. In between was a rich cheesecake ($12), slightly lighter than the classic New York style. The tempura banana split ($12) would have been better with firm, ripe bananas rather than its warm tempura fried ones.

Most of the time the kitchen is ahead of the waitstaff here, although the occasionally painstakingly slow service might have resulted from a kitchen backup. Other than that, the young, earnest, eager-to-please waitstaff needs further training. The runners who delivered the dishes had no idea who ordered what so they auctioned them off (“Who ordered the steak?”), the wine was late in arriving and the host received only a splash to taste and an over-anxious bus boy hovered over the table, instantly pouncing on empty dishes even as diners were still eating. Continued on page 132