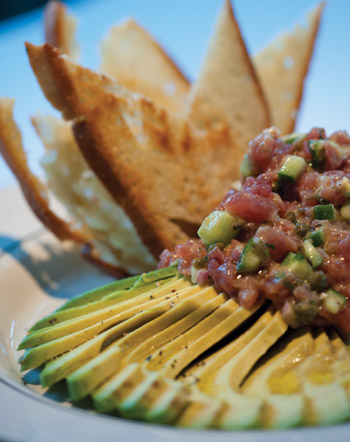 The foodies have descended on the East End grill. This hip, Hampton-centric hangout has become, at least for the present (trendy Hamptonites are a fickle, changeable bunch), the place to see and be seen. On a rainy weeknight, there were no spaces remaining in the packed parking lot and by 7:30pm, diners had to wait for tables on a fast-growing line.

While most of the dishes at the East Hampton Grill were good and some were downright delicious, they often came at high-flaunting prices. A Dover sole special cost $48, starters and salads are at entrée-like levels ($12 to $19, most in the $16 to $19 bracket) and most main courses (better buys than the starters), other than sandwiches, range from $27 to $42.

Every meal here should begin with the accurately-named Heavenly Biscuits ($1.50 to $2 each), big baking soda beauties that are light with a rugged, uneven surface. The honey for dipping was appreciated, but the skimpy, single pat of butter for four people wasn’t. Follow the biscuits with probably the only bargain on the menu—the “nice little house salad” ($7) buried at the end of the “sides” listings. Its goat cheese, walnuts, deviled eggs, corn, tomato and size make it a real find. A couple of other salads also deserve attention. The terrific classic Caesar salad ($12), with its jumbo croutons and Reggiano, is a best of breed pick, while the substantial iceberg wedge and blue cheese salad ($14), with tomatoes and warm beets of two colors, is a cut above the average. Three grilled artichokes ($14) were soft and succulent at their core, a bit more difficult to attack at their surface and arrived with a memorable, but miserly smidgen of housemade remoulade sauce.

Among the main events, the fresh, flaky, ivory-hued Atlantic cod ($29), paired with bok choy and sticky rice platemates, couldn’t have been better. The generous portion of muscular barbecue ribs ($27) with a towering thatch of addictive, though lukewarm, shoestring potatoes and unusually-rich cole slaw were a down-home success story with take-home potential for a second night. And the four, tender, seared scallops ($27) melded perfectly with their white bean ragout, arugula and watercress accompaniments. Only the soft shell crab po’boy ($18) was not exactly destination food. Overly crunch-tough, it was overwhelmed by its homemade bun and over-abundant lettuce and tomatoes.

Those svelte waitresses mentioned earlier are hard-working professionals, but despite a favorable ratio of servers to diners, at times, the crush of the crowds defeats them, as when (among other flaws) our entrées arrived with the entire appetizer plates still uncleared. Finally, you can be forgiven if you find yourself eating faster than you ordinarily do in a non-frenetic setting. The busy East Hampton Grill is less than ideal for diners who don’t equate noise with fun and seek a place for civilized conversation. Rather it’s a perking, going place with hard surfaces, constant ricocheting sound and a clientele often forced to shout over the din.