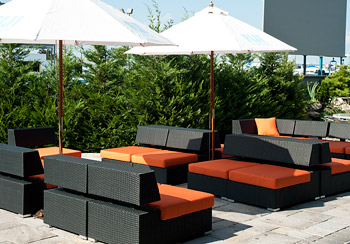 Misfires are few and far between at The Patio, a waterfront, shorts, sneakers and t-shirt kind of place at the canal end of the Freeport Inn and Marina, a 1960’s throwback. Its outdoor 145-seat patio (or deck) overlooking the marina and water beyond it offers a casual, relaxing vibe, some refreshing cold drinks and contemporary American dishes that taste and look better than they do at most laid-back places of this ilk.

In short, The Patio, with its bare tables, slate floors, thirty-foot bar, dockside nautical views and ten boat slips for the dock and dine crowd, knows it isn’t the Waldorf and doesn’t try to be anything beyond a mellow, modest restaurant. Yet, the sophisticated, upscale presentations apparent in every dish far exceed expectations for an eating place that looks like a blue-collar hangout. Even the first taste here, a loaf of bread, isn’t the usual mass-produced, cottony disaster often encountered, but a crusty, dense treat accompanied by noteworthy olive oil for dipping or butter if requested. All requests, by the way, were quickly responded to by a pleasant, well-informed waitress and an affable, ever-present manager who seemed to be genuinely concerned about his customers. 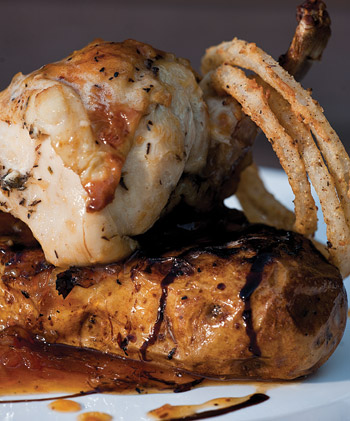 A smooth (not gloppy) taste-packed potato leek soup ($8), enthusiastically endorsed even by those who ordinarily shun it, was the undisputed starter star. Three tall South Main Street Sliders ($14) layered with American cheese and chimichurri and staked with a fried pickle are also a recommended pick, though a request to cook them other than well done will result in moist, rather than dryish meat. A generous portion of tender calamari ($12) with corn meal crust that fell away before it reached the mouth came with an aioli dip rather than the Asian soy sauce listed on the menu, while the Caesar salad ($10) was slightly underdressed and pallid.

Main events sampled included: a rich, filling, appropriately named Uptown Mac N’Cheese ($23) infused with lobster, shrimp, scallops and baked with gouda and gruyere cheeses; a good, fresh, 1½ pound lobster ($36) with hard, tasteless (non local) corn on the cob; a first-class lobster roll ($21) on a nice soft roll with excellent crisp French fries that’s manageable in one hand; and a wild Scottish filet of orange and dill salmon ($23) marinated in citrus Dijon mustard with an orange and dill glaze and more flavor than the farm raised specimens. Wash down all those appetizers and entrées with a refreshing half-gallon Mason jar of low-alcohol, summer white peach sangria ($38).

There are just four desserts here and they are worth ordering. The good key lime pie ($7) with a commendable pastry crust is more creamy than tangy; the ripe strawberries ($9) with just a dash of whipped cream are nevertheless an appropriate pick for calorie counters; the Moose Tracks pie ($9) is a tasty turret of vanilla ice cream, peanut butter and chocolate syrup; and Junior’s titanic, towering chocolate layer cake ($10), easily enough for two or more diners, might well make you, at least briefly, forget their famous cheesecake.