The first thing to know about Richard Gachot’s art is that it’s not about the parts. Gachot creates constructions from found objects. It’s easy to believe his artwork is about recycling and giving a new life to discarded objects. For Gachot, it’s the sum of the things that’s important.

“For me, it’s the idea,” Gachot said. “I get an idea and the objects are what I use to express it. I could use paint or a pencil or a camera. I use objects instead.”

Gachot has been working with found objects for over three decades. His work pushes beyond clever reusing of formerly-useful objects into preservation, poetics, environmental abuse and indictments of human foibles, said Franklin Hill Perrell. 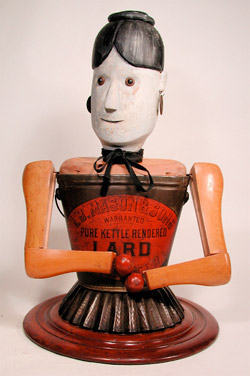 Perrell is the executive director of the Roslyn Landmark Society. He is a former Chief Curator for the Nassau County Museum of Art. He’s also involved with two solo exhibitions this month featuring Gachot’s work.

“Richard Gachot is one of the greatest artists in the area of found object art,” said Perrell. “I don’t think there’s anyone better.”

Complicated and intricate scenes include multiple figures and parts that actually work in the machinery, Gachot said. Using mechanical equipment to develop different series is something Gachot enjoys. Some series have devils in them; other series do not. It depends on the point Gachot is making.

“I get an idea and just have fun with it,” said Gachot. “It’s easy to go off on a tangent but I always bring myself back and follow the idea.” 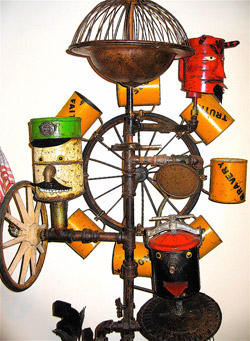 The constructions combine wit with humor, irony and searing commentary. Pieces of former objects are combined to form textures, implied forms and take on new roles, said Gachot. The art is easy to look at and simple to identify. The devil, as they say, is the details. This is often where the kicker is found.

Perrell put it this way in a preface to September’s exhibitions: “Through humble materials, Gachot has created a universal art that produces an original aesthetic and packs a powerful message about the varieties and context of human experience.”

For Gachot, making art from objects is something he just does. His studio is stuffed with potential parts for constructions. Some are given to Gachot. Other times, he goes to great lengths to obtain an object that’s sparked an idea. Like the time he climbed onto LIRR tracks to obtain a discarded item.

“I have a tremendous enthusiasm for this,” said Gachot. 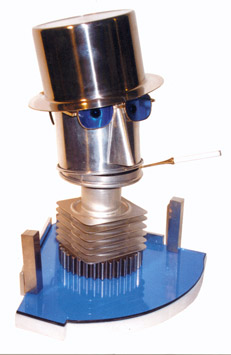 Gachot lives in Old Westbury. He studied at Yale University with Josef Albers (who also taught at the famed Black Mountain College) and Gachot exhibition credits include the Outsider Art Fair and the Frank J. Miele Gallery, both in New York City, the Country Art Gallery and Lynda Anderson Gallery in Locust Valley, the Art Gallery of SPLIA (Society of Preservation of Long Island Antiquities) in Cold Spring Harbor and Gallery Merz in Sag Harbor.

Gachot on View:
The Art League of Long Island (Dix Hills) is presenting a major survey of Gachot’s work through September 25. The show opens on September 18 from 3 to 5pm. Franklin Hill Perrell will give a talk on Gachot’s art during the opening.

The Roslyn Landmark Society is presenting a mini-exhibition at Bryant Library in Roslyn through September 30. Perrell will give a lecture there on September 24 at 4pm.