Recruiters pile up job-hunting stories at about the same rate gossip rags pile up celebrity scandals. Ask any headhunter for his or her favorite story and then pull up a chair and get comfy, it’ll take a while. It might not make us psychologists, but it does give us keen insights into inter-personal dynamics. And one thing’s for sure, the skills used in interviewing for a job are the same skills we rely on in almost all areas of our lives whether it be romantic, sales oriented or continuing to “win friends and influence people” at the workplace. Speaking the other person’s language, in every way, is key. The following is a brief focus on acing a job interview, but the scenario can easily be adapted to a date, sales call, annual review or meeting your honey’s parents for the first time… 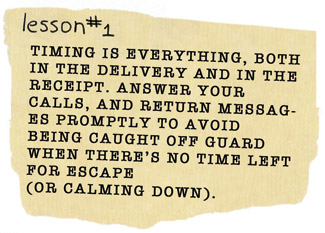 It might not make us psychologists, but it does give us keen insights into inter-personal dynamics. And one thing’s for sure, the skills used in interviewing for a job are the same skills we rely on in almost all areas of our lives whether it be romantic, sales oriented or continuing to “win friends and influence people” at the workplace. Speaking the other person’s language, in every way, is key. The following is a brief focus on acing a job interview, but the scenario can easily be adapted to a date, sales call, annual review or meeting your honey’s parents for the first time…

One of the recruiters in my office got a phone call from a hiring manager in a small investment firm two weeks before a second interview. “When Suzie comes in to meet Meg, make sure she doesn’t give the same limp, soggy handshake she gave me. Meg hates that. If Suzie does that in her next interview she’s sunk.” After three more attempts to contact her over the next two days, we finally reached our candidate twenty minutes before she was due to leave her house for the interview.

Our Suzie did not take the suggestion calmly. “What? You’re calling me while I’m hopping on one foot putting on my pants to tell me not to have a LIMP HANDSHAKE? Was that to bolster my confidence?” We carefully replied that we wanted to pass along anything that might help her get the job of her dreams. She hurled the first three-dozen curses she could think of at us and hung up. 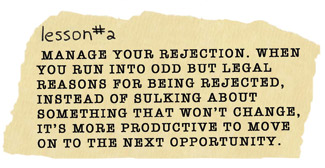 Suzie didn’t ace her next interview, but it was not because of a soggy handshake. It was mainly because she spoke more about the things she liked about herself and less about ways she could help an employer. The second reason she was rejected was because she had limp hair. According to my (now ex-) client, if Suzie truly were excited about the opportunity, she would have used a volumizer prior to the interview. Being male, I had to do an Internet search to learn exactly what volumizer is and does. Now that I know, I would have passed on the volumizer idea and recommended she go with a Bumpit Hair Volumizer Insert as well. But seriously, the story does reflect two very common elements of first impressions: The need to speak to the other person’s needs or interests and the constant element of chance—in this case, the chance of running across someone who regards hair puffiness as a predictor of professional success.

There is so much that is out of an interviewee’s control that the only thing you can do is play the odds. You can’t control if an employer prefers hiring from a certain school or whether there are twenty other people pitching the client of your dreams a product similar to your own. The best way to increase the odds of something happening in your favor is to increase the number of carefully-targeted and well-planned tries. As the saying goes, you have to kiss a lot of frogs before you meet a prince. If you ask around, you will find the people with the best jobs go on new interviews whenever they are invited. The company Suzie interviewed with was clearly one of the wartiest of frogs. Although it was not kind or even remotely productive for an employer to discriminate among candidates on the basis of flat hair, it was legal (especially in this employer’s case because they were consistent; they later rejected a male candidate with limp clothes).

No matter what role chance actually plays, few people take the time to become really skilled at interviewing. You can use that to your advantage by being the rare person who takes the time to research the company, the position and the people you’ll be interviewing with. Whether you are employed or not, once you are interviewing, you have a job. The same applies when you are pitching a new client or attending a holiday dinner for the first time. Your job is to sell yourself well enough, yet remain genuine, so that you’re the one who gets to decide where the road will lead. There is no reason to let a lack of preparation kill what might be a very good opportunity.

When it comes to first impressions, the similarities between interviewing and dating are eerily the closest. Manners and appearance are always important. If you hope to meet your next spouse at a biker rally, don’t wear a cocktail gown to the Texas barbecue at the end of the event. Likewise, know the dress code for the interview in advance by doing research and, if necessary, a little advance skulking around the office building. Once you’ve done the proper skulking, develop a very compelling reason someone should choose to hire you instead of someone else. In the dating world, only a few guys will have a compelling hook on their dating resume like “Hunk’s heart unfairly stomped on last episode of The Bachelorette.” But any savvy job hunter should be able to describe—and especially document—some concrete ways s/he can contribute to an employer’s bottom line. If you concentrate more on how you can make a company wealthier and more secure instead of some irrelevant award you received in your junior year of college, interviewers will move you way up in their rankings.

It’s not to say that getting a new job is all about the bucks. Yet managers somehow find more reasons to like candidates who understand and support their goals, and companies’ goals usually relate to money. Successful jobseekers present themselves as capable of immediately adding value and boosting morale at their next employer (remember, employee turnover costs money). They understand the importance of being likable and getting along, but use valuable first impression time to concentrate on specific skills that would move a company closer to its goals.

You’ve done all the preparation, you presented yourself well and you are excited about the future. Now, you wonder, are you going to move forward or be rejected? Unfortunately, it takes many people six or more new interviews to get a job in today’s environment, so it’s important to stay realistic. When we send people out on first interviews, about 80% of the time people have a good idea about how well they did on the interview, so trust your instinct. The amount of time spent in the interview is a terrific indicator. If the time went longer than what was originally set aside, that’s a very good sign. You can avoid later heartbreak by being polite but direct at the close of the interview. If the conversation flowed well, it could be appropriate to say, “This job really interests me and I think I can [insert company benefit here] quickly. Is there anything else I can answer?” You can encourage accurate feedback if you give people permission to say no: “I imagine there are a lot of quality people interested in this position. Knowing that, could I hope for this continuing to the next step?” The same applies to a sales call or first date.

The art of interviewing is one that combines quantity with quality to achieve a very worthwhile result. Know yourself, know what the interviewer wants and present yourself as the person who will provide what he is looking for. And never, ever forget to volumize your hair before that next interview.