We constantly sculpt our lives to create the version of ourselves that we want the world to see. I’m not just talking about what we wear when we walk out of our apartments or how we decorate the backyard for the barbeque. Think about what many of us reveal and don’t reveal on our Facebook pages and other social networks. Think about what pics are uploaded and where. Think about your album arrangement and your privacy settings. We’re all little artists and designers. We curate our lives.

I’ve often understood concert programming and the building and running of a music venue to be similar to this curatorial process. The venue is the museum; what happens inside is the art. The people who run the show are the curators. What they choose to reveal—the talent, the layout, the architecture, etc.—creates the aesthetic and ultimately shapes our experience as concertgoers.

For 26 years, Michael Rothbard curated the museum called the Inter-Media Arts Center (IMAC) located just south of Main Street on New York Avenue in glorious Huntington, arguably the cultural hub of Long Island. He brought eclectic world music, jazz and rootsy Americana to the area. That was his thing. And because of it, I witnessed fantastic performances by Béla Fleck and The Flecktones, Aimee Mann, and even a quirky Scottish trio I discovered years ago when I accompanied a group of students to London and then again at the Edinburgh International Fringe Festival. They’re called The Tiger Lillies, and boy are they a bawdy band of talented bards. It made sense that if they were to play an American show east of New York City, they’d play it at the IMAC. And they did. Glowingly. And it also made sense that area music fans were alarmed when IMAC’s museum doors closed in 2009 because of increasing costs and a shortage in funding. Shortly after, Michael passed away. The heartbeat of live music on Long Island had temporarily stopped.

On February 1st, 2011, the heartbeat returned—literally. Over the past few months, every time I passed the site of The Paramount (being built where the IMAC used to be), I heard (and felt) a faint but haunting pulse emanating from inside the dark walls behind the construction barricade and awning. It was mixed in with evidence of serious labor going on during the day, but at night it really took center stage. Bom-bom. Bom-bom. Bom-bom. It was as if something was alive in there, as if something was being born—or reborn.

On a recent pre-opening walkthrough with the founders, I found the source of the heartbeat—two speakers projecting a muted thumping bass hung on the wall above where the entrance to The Paramount will be. It’s a terrific idea. “It’s all about bringing the building back to life,” they told me, and though the heartbeat has recently been turned off in the later evening hours (it was getting a bit loud for neighbors), I could still feel its vibrations as we made our way into what will surely become the most serious rock venue Long Island has seen in years and perhaps ever in this writer’s lifetime when it officially opens at the end of September.

The curatorial vision is this: create the best concert experience for all types of music fans at every level of interest while keeping it “as raw as it gets.” Exposed brick edifices and original steel beams and infrastructure help this cause. The place was once an old vaudeville theater (one of the first outside of the city) in 1927. The founders literally lifted the roof off of the place and expanded the space exponentially to accommodate their brick and mortar vision while keeping the integrity of all its immense history. And by the looks of it, mission accomplished. Walking into the main general admission area (there are also plenty of spacious nooks and elegant crannies including a private Founder’s Room for interested persons), one experiences a sense of sublime expansiveness. When the ceiling was raised or rather, restored to its original height, the building was said to let out “a huge sigh of relief…the 70s was not a good time for architecture.” The ghosts are excited because they have more space to play. The owners like to credit lead architect Karen Hoffman (Hoffman Grayson) for her work and vision on the project. They add that they want The Paramount to be a place that feels like “a bunch of cool guys took over an abandoned theater, threw a band on stage, and had a party.” 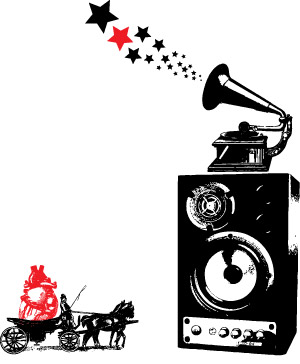 If you combined the industrial grit of NYC’s Bowery Ballroom or Webster Hall with the festival-like appeal of the Jones Beach stage, you’d begin to get close to what’s going on at The Paramount. If all that is promised happens, shows here might be magical. The place feels like a temple erected as homage to the gods of rock and roll. There will be screens and monitors for video projections of the gig. Famous lyrics will adorn the stairways. Local graffiti artists will tag the bathrooms. There will be a 2nd floor lobby with a triangular “steel I-beam” bar in front of giant glass windows overlooking the street that may become one of the most exquisite places to see the sun do its daily exit in Huntington. Artists (booked by Live Nation) will love the world-class sound and hospitality. And by the looks of what’s already on the calendar—Elvis Costello on opening night, the B-52s, the Pixies, Amos Lee and Willie Nelson to name a few—the programming aims to book artists who are big enough to fill the 1,600-person capacity and diverse enough to attract folks from the east and the west and bring “music back to Long Island.”

The Paramount is slated to come alive September 30th, and its opening may begin a new era in entertainment for our island. Through a series of what they call “happy accidents,” the founders have designed a kind of perfect urban playground in suburbia. People will come. That’s for sure. The trick, of course, will be to unite the rich and divergent music scenes on the Island (classic rock and jam band fans, emo and indie rockers, club and electronic music lovers, etc.) in a way that works for everyone and somehow respects the community in which it exists. Their vision bodes well for music lovers. The choices we make define who we are, and these feel like choices that haven’t been made in Huntington and perhaps Long Island for quite some time.

[Update: Since the writing of this article, The Paramount has added Rusted Root to its schedule for a “soft opening” on October 28]