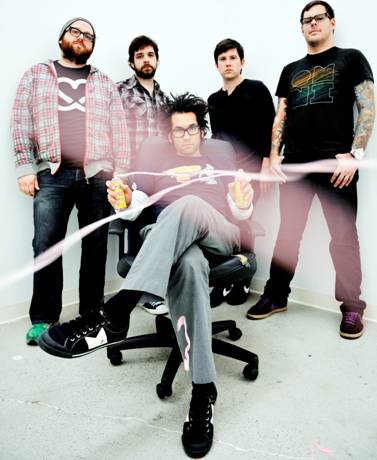 —From “Disappear” by Motion City Soundtrack

When Motion City Soundtrack plays 2 nights at Irving Plaza this week, the quintet will be performing all four of their acclaimed CDs in their entirety—2003’s “I Am the Movie,” 2005’s “Commit this to Memory,” 2007’s “Even if it Kills Me,” and 2010’s “My Dinosaur Life.” (If you’re fans of vintage MCS, you should attend the show on Friday, September 9th to hear their first two records, while their latest two discs will be performed on Saturday, September 10th.)

“We’re not 100% decided on the title yet, but we do have one that we like,” reveals Taylor. “Sonically, we’re still the same band. We’ve stayed true to some sounds from the past, and have expanded in a few other ways. From start to finish, the record sounds more eclectic. Lyrically, Justin visits a few new places that he’s neglected in the past, like mortality – something that most people don’t like to think about. He also visits more immediate subjects in his life, runs them under a microscope and shares his findings.”

While NYC is the closest Motion City Soundtrack will come to Long Island on their LG Ones to Watch Tour, the band has fond memories of playing on LI, especially the Downtown:

“We played the Downtown many times, recalls Taylor. “We always had fantastic shows there. The crowds were always big and looking to get crazy. It’s one of the first places that we played where we noticed that people were really paying attention to what we were doing as a band.”

When you head to Irving Plaza for two high-energy shows this weekend, don’t forget to get there early and check out opener Jenny Owen Youngs, who is highly recommended by Taylor.
For more info check out: http://www.motioncitysoundtrack.com.