A recent survey revealed that 40% of Americans believe that the rapture is coming soon. In the South, it is over 50%; and that doesn’t even include others, like peak oil believers, who hold non-religious theories of why the world as we know it is about to end. It’s easy to laugh at them, but if you truly believe that civilization is in its final days, is there anything you wouldn’t do to prepare yourself and your loved ones?

In addition to being one of the year’s best movies, Jeff Nichols’ Take Shelter is a rare, serious work that explores this mystery from the inside. At first glance, Curtis LaForche (Michael Shannon) seems like a pretty regular guy. He lives in Ohio with his wife Samantha (Jessica Chastain), and his six-year-old daughter Hannah, who is deaf. Curtis makes a decent living as a crew chief for a sand-mining company and Samantha picks up extra money selling her needlepoint work at a local flea market. Everything changes when Curtis begins to be tormented by powerful apocalyptic dreams and visions. Enormous, swirling flocks of crows swooping out of the sky, strange viscous rain and bizarre lightning patterns, are just some of the unsettling sights that play out inside his eyes. Is he simply losing his grip on sanity or seeing true signs of an impending day of reckoning? As Curtis begins to act upon his premonitions, the question morphs into the even more disturbing dilemma of whether his family needs protection from an approaching calamity or from Curtis himself. The intensity of the mystery is heightened by the amazing verisimilitude with which filmmaker Jeff Nichols renders Curtis’ disturbing and terrifying visions.

The potentially fantastical story is anchored in real human emotions by brilliant performances from two of our best emerging actors. Michael Shannon isn’t famous yet, but is instantly recognizable to anyone who has seen him in Bug, Revolutionary Road, HBO’s Boardwalk Empire or numerous theater productions in New York and Chicago. 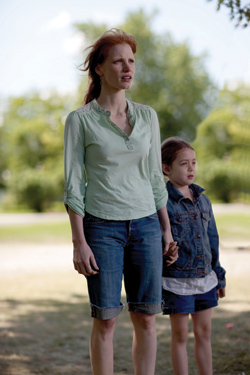 Shannon brings great honesty and depth to his performance as Curtis, making us feel for this decent, loving man who must make difficult choices about his family without being able to be sure if he is helping or hurting them. Although she was a complete unknown just months ago, Jessica Chastain has been wonderfully omnipresent in 2011, starring in such diverse movies as Terrence Malick’s The Tree of Life, The Help, The Debt, Ralph Fiennes’ film of William Shakespeare’s Coriolanus and Al Pacino’s upcoming Wilde Salome. Chastain’s powerful performance allows us to feel both the deep love and slowly suffocating fear that Samantha feels towards her husband.

This is only Nichols’ second film (his first was the effecting Shotgun Stories, which also starred Michael Shannon) but it clearly marks him as a filmmaker to watch. Take Shelter grabs hold of viewers right from the film’s mesmerizing first image and doesn’t let go until a haunting finale that will undoubtedly have audiences talking and arguing long after the end.