Ladies and gentlemen, get ready for the kettlebell swing. You can do this versatile movement for time, for high reps, mix it in for interval training, or even use it as a warm-up.

The kettlebell looks something like a cannonball with a handle. Most fitness enthusiasts trace its use back to Russia in the 1700s when such bells were used as counterweights for farm equipment. Another theory places its origins in the Scottish Highlands, where handles were put on curling stones in the winter for easier grip. Either way, kettlebells (or girya) eventually made their way to Russia where they became a popular fitness tool—and circus strongman prop. Fast-forward to the 21st century and what’s old is new again as you’ll find kettlebells of all sizes and colors in gyms from sea to shining sea.

What sets a kettlebell apart from, say, traditional dumbbells, is that its center of gravity extends beyond the grip and thus enables the user to execute full-body, ballistic and swinging movements.

Kettlebell movements range from the familiar (deadlift, squat, etc.) to the less common (snatch, clean and jerk) to the esoteric (windmill, Turkish get-up) but perhaps the best way to become acquainted with this versatile fitness tool is to let it swing. 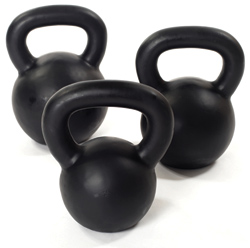 2. Reach down and grab the kettlebell by its handle with both hands, your arms hanging loosely. Your arms are not generating the swing. That task will fall to your “posterior chain,” e.g. hamstrings, glutes, core and back.

3. Swing the bell from between the legs up to chest height, where it will achieve a temporary weightlessness.

4. Inhale as the bell swings down between your legs and exhale when you raise it to chest level.

5. CRUCIAL: Do not use the lower back alone to generate this motion. You are primarily thrusting from the hips and thighs, culminating in a powerful forward “hip snap” as the bell reaches its highest point.

Perform the swing in sets of 20 (breaks between sets or superset with another movement) or go by time, say, 30 seconds on, 30 seconds off.

Variations include one-arm swings, alternating arms, etc. but the basic, two-arm swing is not only a useful introduction to the world of kettlebells, it’s an exercise that develops power, burns fat and builds endurance in and of itself.

Final note: The exercise advice presented above is not meant for anyone with contraindicated health problems. Please consult a medical or fitness professional.