Life on the road and in the studio is a challenge for some musicians who want any semblance of a normal life. For musicians Derek Trucks and Susan Tedeschi, the complications are varied and intertwined. For Derek Trucks, nephew of original Allman Brothers Band drummer Butch Trucks, music is his life.

A guitar child prodigy, Trucks became an official member of the Allman Brothers when he was barely out of his teens. He has also fronted his own band, The Derek Trucks Band, since the age of 15. Along the way, he played on countless sessions and played guitar in Eric Clapton’s touring band for the 2007 tour that featured a great deal of music from Clapton’s Derek and the Dominos period. Playing some of the music from Layla featuring Duane Allman presented a crossroads for the young guitarist.

In 1999, Trucks met blues artist Susan Tedeschi. The two were married in 2001 and they are the parents of two children. Of course Tedeschi is a busy recording and touring singer, songwriter and guitarist in her own right. Since both she and Derek play a lot of live concerts and Derek is essentially in two groups, not to mention their raising a family together, the complications normally facing musicians are multiplied. 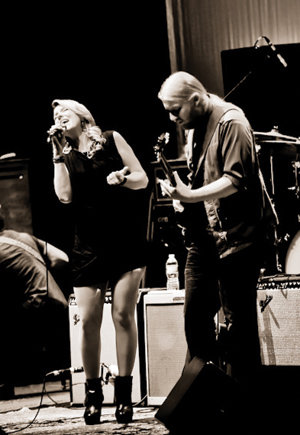 This year, though, is a turning point for the couple. They formed the Tedeschi Trucks Band, released their debut album Revelator (Sony Masterworks) and will bring their traveling musical family to the Tilles Center in Brookville on October 14th.

Talking recently before soundcheck from a hotel in Milwaukee, Trucks said he is thrilled to finally form a more permanent musical partnership with his wife Susan. He began by talking about the couple’s plan for their group and its impetus. “We had been thinking about doing a project together for years. We had tossed around ideas, but we were so busy with our solo projects and the Allman Brothers schedule was also very busy. Also, the Clapton tour came up and we had two kids (laughs). It was a busy decade!”

Trucks explained how it all finally came together. “About two years ago I could kind of see the window open. I talked to Susan and told her ‘It’s kind of now or never. We’re both still young now, but it’s going to get away from us.’” There was also the decision of how to handle their solo careers. “We could keep our solo bands together and try to do all of it, but I really felt like if we’re going to give it a real go we had to make it our priority,” he recalled. “I just felt that music’s better without a safety net. We decided to put the solo careers on hold and really jump in full bore.”

The Tedeschi Trucks Band is an ambitious concept. Traveling with an 11-piece band, along with mixing rock, blues, jazz, soul and other styles, is a daunting task in today’s music business. The initial concept of the group called for a smaller scale. “The first band was going to be a five-piece group. Then we started thinking about it and we were watching Mad Dogs & Englishmen with Joe Cocker and that big crazy-ass circus (laughs). We thought ‘Nobody does this anymore.’ No one has the balls to do that anymore. We just said, ‘Why not give it a shot?’”

Citing bands like Sly and the Family Stone, Delaney & Bonnie & Friends and even Trucks’ own Allman Brothers, along with the aforementioned Mad Dogs, he said, “They were all bands that have influenced us at different times. I just like the idea of a small militia on the road going from town to town. When you leave, people remember.”

I’ve noticed whenever I interview Derek Trucks he enjoys talking about the musicians who inspired him. After stating that Duane Allman is his “first and biggest influence,” he talked about jazz artist John Coltrane as a major source of inspiration. “Something about that look and his sound—you can tell it was a total dedication to the craft,” he stated. “He was on this incredible search personally and musically. That music has been a huge inspiration, especially Live At Birdland, My Favorite Things and Love Supreme.”

Last Year, Trucks rekindled his musical relationship with Eric Clapton and played on his most recent album entitled Clapton and recorded at New York’s famed Electric Lady Studios. Memories of the 2007 Clapton tour are still fresh in Trucks’ mind. “There was a handful of times on that tour where there were some magical moments, especially with songs like “Why Does Love Got To Be So Sad?” At Trucks’ urging another Derek and the Dominos classic, “I Am Yours,” made it into the set. Trucks explained how he, Steve Jordan and Doyle Bramhall II “were egging [Clapton] on to throw more of those tunes into the mix.” Trucks spoke reverently about the Layla album and Eric Clapton. “That’s a record that I grew up with and was named after essentially, and to be deep into those tunes and really playing it and look over and that’s Eric Clapton over there…” he recalled.

In wrapping up our talk and getting ready to head to soundcheck Trucks returned to thoughts of the Tedeschi Trucks Band. “To make great music and to have a great band, there has to be some blood, sweat and tears,” he stated. “If it’s too easy then it sounds too easy. I feel like when you show up with a band this big and you’re putting out all that energy, people get a sense they’re getting their money’s worth. It’s not an act. It’s a real live, breathing thing.”

Check out the Tedeschi Trucks Band’s album Revelatior on iTunes