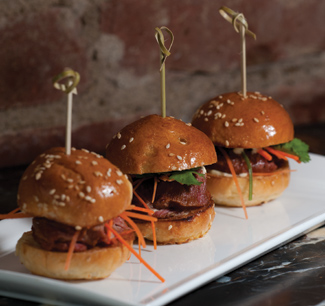 I suspect Huntington Social will be a “local-boy-makes-good” story. This casual, upscale, 50-seat restaurant that opened in early July in the heart of Huntington Village is owned by Christopher Lee, a hometown chef and three partners (one of whom, Rocky Bruno, owns Christopher’s about a block away). Mr. Lee, who grew up in Huntington Station and graduated from the California Culinary Academy, had worked at some of this country’s most prestigious restaurants including Daniel, Jean Georges and Oceana in Manhattan. Now he has returned to his hometown to open Huntington Social where the youth-oriented night club Chesterfields (and before that Talk of the Town and Cinnamon’s) held forth for many years.

Perched on the second floor of Huntington’s central intersection of Routes 110 and 25A (Main Street), Mr. Lee describes his new enterprise as “a 1920s Prohibition era speakeasy gastro pub,” none of which I sensed during my visit on a slow, summery Sunday night. Rather it’s a pleasant venue of red-velvet banquettes, shiny wood floors, a graceful center-of-the-room chandelier and a long, exposed, brick-backed bar. It offers friendly, snappy service, views of downtown Huntington, modest prices, highbrow ingredients and a limited menu (seven entrées) of familiar, dependable, sometimes creative dishes. Patrons enter by climbing up a long, carpeted flight of stairs (it’s not for the handicapped) with red walls sporting whimsical works of art.

A recent dinner began with selections from both the “snacks” and “appetizers” sections of the menu. (They are very much alike in price and type of dishes). A ton of Cajun fries ($7) in a paper cone were alive with Asiago cheese and enhanced by their smooth, tasty Creole dipping sauce. The wedge salad ($10) is a flat, circular slab topped with smoky bacon, oven-dried tomatoes and a blue cheese dressing. It’s a bit difficult to keep it all together on a fork, but worth the effort. Three veal cheek “Banh Mi” sliders ($12), layered with a citrus sesame aioli, pickled carrots and cilantro were interesting though not quite as exotic as their Vietnamese Banh Mi billing promised. 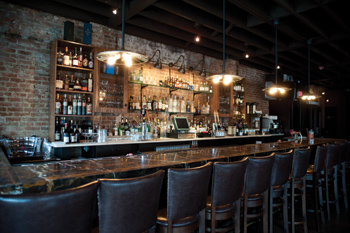 Among the main courses sampled were: a grilled Fontina cheese sandwich ($16), a gentle little dish lifted a bit above the usual by the meat of braised short ribs laced into the cheese; a fresh, well-prepared Scottish salmon ($26) enhanced by its imaginative accompaniments like tiny, tender English peas and tasty fava beans in a tarragon crème fraiche sauce; and a mellow, man-sized, on-the-bone hunk of braised lamb shank ($28) on a non traditional cassoulet made with summer beans.

When choosing end of the meal sweets (all $8), give consideration to “the Social Sundae,” which is a take on of the so-called Elvis Sundae. It seems Presley went for this peanut butter, ice cream, banana combination. Its chocolate fudge sauce and honey don’t hurt a bit either. Three red-velvet cupcakes crowned with cooling vanilla cream cheese were moist, rich and rewarding while the strawberry shortcake with so-called bubble gum Chantilly will interest diners who prefer the old-fashioned biscuit variety.

When to try the no reservations Huntington Social is a bit of a dilemma. As with most restaurants, it’s busiest on Friday and Saturday nights. Yet those are the most likely nights that Mr. Lee might be in the kitchen. He has other restaurants and projects that prevent him from being ever present and as Huntington Social becomes better established he will be available locally less and less. Fortunately his Executive chef, Julia Doyne gave a good accounting of her culinary skill when we visited.