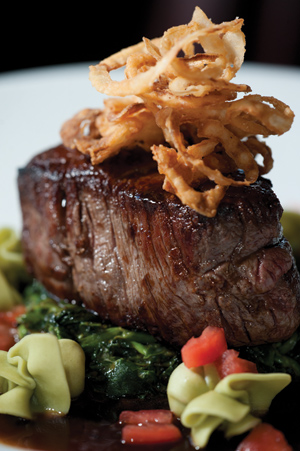 Glen Head’s loss is Albertson’s gain. Mitch SuDock, who presided over the tiny standalone Bistro M, next to the railroad tracks there for seven years, has, along with co-owner Toni Contino, who ran the front of the house, moved on to establish Mitch & Toni’s American Bistro in Albertson. Their new, modern enterprise, where Citrus had been, is a white tablecloth venture of mirrors, candles, glass partitions, harmonizing burnt orange and chocolate brown walls with whimsical art on those walls.

The place has been packed on weekdays as well as weekends since it opened less than six months ago. And with good reason. Mitch SuDock knows what he’s doing and does it very well. He, like other chefs, has his strengths and weaknesses, but I’ve always regarded him as one of the Island’s most gifted kitchen commanders. One who, despite often glowing reviews, never received quite the recognition he deserved. Somehow when the likes of top toques, like Mike Maroni, Guy Ruege, Tom Schaudel and Matthew Hisiger were cited by local foodies, Mr. SuDock’s name often went unmentioned. That might well change as a result of his increased visibility and exposure at Mitch & Toni’s where his comprehensive, multi-choice menu features accessible dishes seasonably appropriate based on local ingredients.

Dinners begin with a centerpiece of refreshing smoked salmon mousse encircled by crisp toast rounds and a loaf of dense, crusty bread accompanied by generous slabs of butter. We followed them up with a Mesclun salad ($10), not just the too often encountered amalgam of tired, predictable greens, but a more imaginative assemblage of strawberry slices, beet bits, super fresh goat cheese, red onion, pecans and sprightly wonton strips in a sesame vinaigrette dressing. Every bit its equal was the tender, delectable grilled octopus ($17), two long tentacles atop an enticing bed of gigante beans, olives, caper berries, celery, fennel and red onion napped in a roasted garlic-honey vinaigrette. Less memorable, but quite respectable, were soothing, mild-tasting shrimp dumplings ($13). Crab and corn ravioli ($13) well reflected the seasonality of Mitch & Toni’s menu and harbored corn so fresh that it tasted as though it had just been cut from the cob. 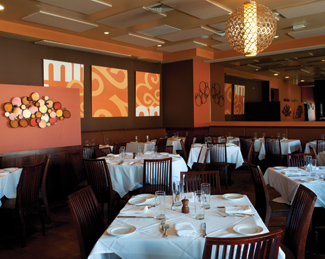 Main events consisted of a hefty, tasty, but slightly dry, hunk of bourbon-glazed pork porterhouse ($25) paired with some moist, noteworthy shitake mushroom and pine nut farro; a pristine pistachio crusted square of day boat Halibut ($32) with more than a dollop of creamy, silken polenta given a welcome tang from its lemon beurre blanc; a soft, sizable, running with juices filet mignon with a batch of cubed, fried potatoes and garlic spinach ($34); and a colossal blue ribbon burger ($17). This 10-ounce, flavor-packed beauty, with a too big to finish serving of good French fries, lettuce, tomatoes, mushrooms and cheddar or blue cheese, more than held its own with any entrée on the menu.

Smallish desserts (all $8) sampled were: a moist, red velvet layer cake with berries and the mandatory cream cheese icing; a rather bland peach cobbler; a raspberry linzer tart somewhat overwhelmed by a scoop of house made, deeply flavored chocolate sorbet; and a terrific, crusty chocolate fudge brownie striped with decadent chocolate fudge and accompanied by cinnamon ice cream.

Mitch & Toni’s is an upbeat spot. It can get quite noisy, yet while it could benefit from some absorbent fabric or soundproofing, it, unlike many Island restaurants, provides understandable table conversation that is never obliterated.