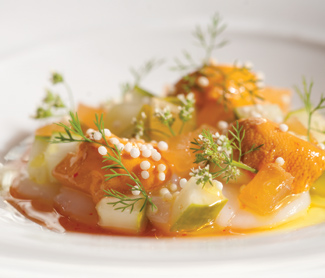 Southfork Kitchen in Bridgehampton is a serious, substantial seafood restaurant that strives to respect the Island’s waters and land while dazzling the Hamptons’ high-profile glitterati. Most of the time, this rustic, cool, woody, cabin-like spot, with its refined, polished service, back-to-nature ingredients and creative chef (Joe Isidori, a CIA graduate who earned a Michelin star at DJT in Las Vegas) succeeds. The fashionable folks are flocking to this unique eating place that features imaginatively-prepared local fish caught on hook and line, vegetables and artisan products and they’re paying $68 a head for the restaurant’s three-course prix fixe dinner to do it.

Just about everything served at the Southfork Kitchen is, as a press release proclaims, “grown, caught, raised or baked right here.” That means the fruit, wine, cheese and seafood are for the most part from nearby. Owner Bruce Buschel, a renaissance man who writes for hip publications (Rolling Stone, GQ, The Village Voice) has directed Jazz films and even created a musical, is the driving force behind a vision that attempts to “keep the fingerprints and carbon footprints” of his ever-changing, sustainable, local and seasonal menu to a minimum.

Inside, Southfork Kitchen strikes a rural-industrial pose. The sound of muted Jazz fills a room filled with candles, pillows and piping on booths and overhead fixtures whose bare bulbs cast a subdued light on the shiny tables below. Hanging lights encircle the room’s perimeter. Substantial whole-grain bread from Blue Duck and house-made butter arrive in small, square, rough-hewn wooden boxes. A complimentary trio precedes appetizers. There’s a fresh, North Shore oyster with some salmon roe on the half shell, a tiny spoon of tasty salmon-like arctic char tartar, and crunchy, noteworthy cucumber and radish slices.

The hands-down choice among the starters is the rich, aromatic, Southfork Kitchen chowder with its local clams, soy-cured bacon, tender stems-on baby vegetables (turnip, asparagus, potatoes, etc.) swimming in a nautical touched soup. Less impressive were crispy sardines full of tiny, off-putting bones that made eating them difficult. A smooth, even velvety, starter of Iacono Farm’s chicken liver pâté is recommended, especially when it’s spread onto the peasantry whole grain bread (you will have to dig through the radishes and pickles that cover it). 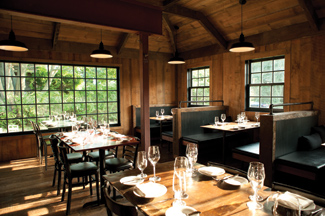 The tender soft shell crab (all of it was eatable) crowned by a once over lightly fried egg and wrapped in smoky prosciutto makes for an interesting and rewarding entrée. Jurgielwicz Farms smoked duck, with sugar snaps, cipollini and wheat berries, was tasty, fatty and juicy while a pot of Prince Edward Island mussels, mixed with thick little bits of Heritage bacon, kim chi and Thai basil passed muster, but arrived without a small fork or plate for the empty shells.

At dessert time, a Mecox Bay dairy cheese plate (cheddar, taleggio, stilton, gruyère and camembert) escorted by Miss Amy’s preserves and Bee’s Needs honey is a triumph of taste, texture and freshness. A pudding-like, deeply-flavored chocolate cake with vanilla ice cream was a sundae-type treat and so too was a silken butterscotch pudding. But the popcorn over it seemed like innovation for innovation’s sake (or for shock value) rather than an enhancement of the dish.

The enlightened one-of-a-kind dining experience at Southfork Kitchen has proved to be immensely popular. They obviously are doing something right. Despite opening in October 2010 after the marauding Manhattan foodies and restaurant critics had left the East End and then a fire that closed the restaurant this past June and early July, Southfork Kitchen is packing them in.