From the moment I left the Antarctic Peninsula in 2005 and returned to the southern tip of South America ready to launch, I vowed to revisit that crystalline quartz otherworld known as the White Continent. Extremes of climate, terrain and awe found on no other continent confront all who venture here. The 1,800-mile-long Transantarctic Mountains rival the Rockies in height, but only the peaks break through the towering ice sheet. Cubic and gently sloping, sculpted icebergs larger than a tilted Empire State Building glimmer green and blue while endless undulations of glacial crest crackle and boom over mountain valleys as they fall hundreds of feet into sea water. Getting there isn’t easy via the Earth’s most torrential wave action. But this time, I arrived in style. 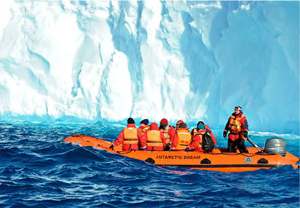 Like climbing a strenuous mountain for a dandy view, just getting to Antarctica deters most travelers. Even ocean-going warriors despise crossing the Drake Passage, which is required to reach Antarctica from South America. The Drake Passage, along with being the confluence of the Atlantic and Pacific Oceans, separates the South American continent and the Antarctic Peninsula. Splash in the Drake’s funneling of clockwise circulating waters around the Antarctic continent and you have Earth’s strongest current with an average flow rate four times stronger than the Gulf Stream. Did I mention wind? The Westerlies, not compromised by mountain ranges, often blow up to 100 miles per hour. These factors produce gigantic waves; half of our 70 passengers fell ill during the southbound and northbound passages, which takes two days going a maximum speed of 12 knots per hour.

The key distinction between the Russian-built and staffed research craft I sailed in 2005 and a 2011 expedition on the Antarctic Dream was The Dream’s dinner cruise-style dining/living room. Whereas the Russian boat’s dining hall resembled a factory mess hall with dingy portholes, The Dream’s nearly basketball court-sized dining area has an interior living room complete with couches and surrounded by 21 picture windows that provide 270-degree views of our globe’s most epic scenery. This wooden floor room reminded me—table and couches removed—of a classic dance hall. The combination of scenery, light and rocking waves inspires daydreaming.

The 270-foot Antarctic Dream, refitted for finer cruising in 2006, was initially Dutch-built as a Drake Passage/polar-specialty ship. Smaller capacity vessels like The Dream, which hosts no more than 80 passengers, can navigate shallow bays and narrow channels, allowing quick, easy Zodiac raft landings for intimate hiking connections with the terrain.

Ships rolling in waves make people nap, a lot. When not napping, passengers are mellower on the boat than they’d be at home—the only problem with snoozing is possibly missing something gorgeous. Once within sight of iced land, the waves calm down. In total, we were 18 nationalities—a Chinaman painted the Chinese symbol for water, a seaworthy Dutchman told tall seagoing tales, a British chairman reflected on the horrors of doing business in Nigeria, an Italian woman cried from the beauty overload. The sort of folks undertaking such adventures are usually interesting, at least, but nothing outdid the penguins—adorable, flightless birds doing their funky walk-dance. They also run, trumpet, play tag and waddle closer to look at you. Voyagers also feel up-close encounters with fur seals, humpback whales, leopard seals and orcas.

The ship’s bridge is always open to visitors and barring ice-bashing emergencies, the captain is usually available for a chat. Someone on watch is always willing to discuss life at sea, whale watching or storm fighting, even at 3am. There’s a passenger’s bridge below that makes for a nice happy hour setting. The manageable number of passengers allows full ship access to everyone and express Zodiac landings that last two to three hours each day. Choose your adventure craft carefully: Humongous cruise ships, which are being phased out, are forced to loom far from land, making their Zodiac landings tedious and rare.

Beholding the frosty-themed marvel is glorious yet intimidating. Imagine an endless Alps-like range and seaside covered in thick, groaning glaciers while whales breach and unafraid penguins shuffle…pitch in a few 25-story building-sized aquamarine icebergs with their tops jutting above the waterline at odd angles. There are glaciers elsewhere. The lingering bits in Montana’s Glacier National Park will melt by 2020. New Zealand’s Fox and Franz Josef’s Glaciers, attractions I marveled at in the 80s, now seem puny. Alaska and Norway have significant offerings, but Antarctica is a glacier that’s 1.5 times larger than the US and is constantly calving icebergs into the ocean. It’s a live show.

The daily landings are epic, but the Zodiac tours that don’t touch land were also highlights. We toured several iceberg showrooms, where ice art ranged from Renaissance classics to bizarre surrealism, while snoring seals napped on ice floes and bergy bits (ice chunks smaller than minivans). The stunning array of ice sculptures were all crisply reflected in calm waters. And if we can stem the tide of melting ice, it will remain unspoiled here—the universally approved 1959 Antarctic Treaty permits only research. Visiting boats aside, there’s nowhere to eat, sleep or gamble.

While sipping Malbec in the most inhospitable, yet intoxicating, place on Earth, two nimble, often acrobatic, wave-challenged Chilean waiters serve three-course lunches and dinners along with flowing complimentary wine. The Dream is staffed by Chileans who facilitate a mainland visit and two to three peninsula visits per day. Most of the landings were about nature, but a few visited research stations that doubled as shopping binges. Royal bargain: At Port Lockroy, a British research station, international-anywhere stamps cost $1. Similar landings and offerings to mail via Chilean post cost $5 while Argentina charges $7 for their stamp. Hmm.

Fine wines flow with each meal, which ranges between premier wedding food and divine. A reality of all cruising is six hours each day of dining with strangers who hopefully become friends. The ship’s emcee, a nimble Chilean ornithologist with 20 Antarctica seasons on his résumé, helped set the tone with humorous PA announcements and after-dinner recaps. Each season means 13 sailings, so these expedition leaders get their share of waves and whiteout.

Frequently patriotic about Chile, The Dream’s crew restocked a Chilean research station with fresh water and other supplies. While visiting the station (probably an incognito Chilean Navy Base), one-third of a nearby ten-story building-sized iceberg calved, pushing a huge wave toward the base and scaring researchers and panicked tourists into uphill sprints. As the remaining two-thirds of the berg rocked giant and slow in recovery, witnessing something that colossal oscillate in slow motion morphed reality into a dreamy optical illusion. 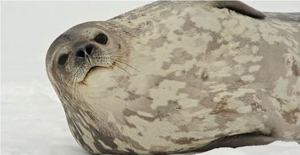 Recently, ships on this route have been known to sink (miraculously, everyone got off a GAP Adventures ship with a rock-torn hull in time and were rescued by a nearby ship), lose engines and be partially crippled in savage Drake Passage storms (the Clelia II cruise ship), or be dented by uncharted rocks (Polar Star) forcing passengers to be transferred to other ships. Luckily, scheduled ship traffic means help can be available, and Chilean and British Navy ships have also aided rescues, but this is the worst place on earth to fix a problem. The Antarctic Dream is one of the safest ships in the industry. Its ice-strengthened hull was built specifically for polar navigation and exploration, it has an emergency heliport and three engines (just in case, a carryover from its Chilean military days).

My most intense sense of Antarctica’s unpredictable spirit was in the narrow Lemaire Channel, which our ship passed through in both directions in a matter of hours. Our initial passage through the glacially flanked channel was calm and picturesque. The return was savagely ice-clogged because a brutal windstorm knocked gigantic glacier chunks off the towering mountains lining the passage. Our bulldozing return through the channel was tricky, especially in stormy 80-knot winds. This is where experience counts most, and the Dream’s crew got us through without incident.

Before tackling the Drake Passage again, northbound, we disembarked to trek around Deception Island, an eight-mile-diameter volcanic caldera with a brown-rock moony landscape. A long hike around the caldera’s rim, battling gale-force winds, provided a final chance to stride upon an otherworld devoid of anything familiar. Another part of this island’s shoreline steams where geothermal-heated water flows into the icy ocean, making a warmish swim an option in a very finite area. A Canadian guy and his Greek wife also took the plunge. (Note: I later found out that dip probably landed him in an Athens hospital suffering from pneumonia.)

My final Antarctic wildlife observation may have been a “Return to New York” omen. No doubt a “beachmaster,” a hefty, dominant, snarky male seal guarding and breeding with his harem gave a few of us the eye. Then, snarling like a frenzied junkyard dog, he galloped 100 feet on strong fins toward a neutral Swiss guy. Yes, this is still their place.

To sail the Antarctic Dream, visit antarcticdream.com or call Adventure Life at 1-800-344-6118 to book. Season runs from November 1 until March 6; 11-day expeditions depart and return to Ushuaia, Argentina. Kayaking available.

LAN flies seamlessly throughout South America, including to Ushuaia, the gateway to Antarctica. lan.com. On my way to and from Antarctica, LAN made it easy for me to stop over in Buenos Aires and Uruguay—and anywhere else on your South American wish list. LAN’s gateway cities for the US are San Francisco, Los Angeles, Miami and New York (JFK).

Lonely Planet’s Antarctica guidebook is one of the niftiest guides I’ve ever taken on a trip, partly because it doesn’t have to toil with sleep or eat listings. (It’s internationally illegal to construct hotels or restaurants there.) lonelyplanet.com.