Whether they’re saints or sinners—a leader of the last remnant of mankind, a courageous teacher or the nemesis of a sensitive seeker—the characters played by Edward James Olmos are generally men of substance and strength, memorable standouts in the films or TV shows in which they appear.

So it’s no surprise that when the producers of Dexter were looking for a new character for their hit Showtime series about a conflicted serial killer who murders other killers, they chose Olmos.
The new role builds on Olmos’ impressive body of work, including his previous turns as Admiral William Adama in the 2003-2009 science fiction series Battlestar Galactica, as a high school teacher who inspired struggling inner-city students to learn calculus in the 1988 movie Stand and Deliver, and as the sinister officer Gaff in the 1982 film Blade Runner.

For its sixth season, the team behind Dexter looked at a long list of actors to play Professor Gellar, a charismatic religious studies teacher, “but when we came to Edward James Olmos’ name we knew that was our Professor Gellar,” said executive producer Scott Buck. (The new season premieres October 2.)

“We wanted someone with a quiet intensity who could convey a sense of formidable power with just a glance,” Buck said to Long Island Pulse. “He was cast very early in the process. I believe the first script was still in the works, so once he was signed we very specifically shaped the character to the actor.”

The actor Olmos, now 64, was shaped on the tough streets of East Los Angeles (where Stand and Deliver, based on a real story, is set). His father was a Mexican immigrant and his mother Mexican American. As a teenager, he became the lead singer of a band. Soon after moving into acting, he got the lead role in Zoot Suit, a play about riots in the 1940s sparked by the murder of a young Mexican American. He received a Tony Award nomination and then starred in the 1981 film version.

From 1984 to 1989, he portrayed Lt. Martin Castillo in Miami Vice, for which he won a Golden Globe and an Emmy. He received an Oscar nomination for Stand and Deliver and has received awards for directing. In 1980, he started his own multimedia production company, Olmos Productions, where he often directs, produces and acts in films. Known for his activism in Latino affairs, he speaks frequently at schools.
For our interview, he took a break from editing Filly Brown, a movie he made with two of his six

children. (He’s had three wives, Kaija Keel, Lorraine Bracco and, now, Lymari Nadal.) Soon after, he was to leave for Atlanta to be on a panel with CNN’s Wolf Blitzer about the census, come back to Los Angeles and then fly to Portland, Oregon, to appear in the IFC comedy series Portlandia.

Serious and thoughtful, he occasionally allowed his gravelly voice to fill with emotion—when he praised his screen idol, mourned the loss of a fellow actor and talked about his mother and his children. Even on the phone, he conveyed that “quiet intensity” and “sense of formidable power” that make him an iconic presence.

Can you tell me a little about your character in Dexter?
The character I’m playing is a professor of theology, and he’s pretty much the inspiration to one individual in particular—the role that’s played by Colin Hanks. I really can’t say that he’s a bad guy, because that’s the whole gist of the series. That would be a spoiler. The character definitely motivates a lot of people, with his theology studies and his understanding of theology.

This is a really dark show and you’ve been in other shows that have been dark. What do you think is the appeal of, in this case, a very gory show?
Probably the biggest draw is the story and the lead character of Dexter. Michael C. Hall does a great job bringing to life the character and I think that’s the reason why people like the character. What he does is very, very bad, but you kind of understand why he’s doing it, and that goes back to the writing. You could have someone else doing the performance and it would be too dark. This is probably the darkest show I’ve ever been a part of in my life. I don’t think there’s been a darker show on television, ever.

How does it affect you, when you’re doing something so dark?
I don’t look at the whole script. I just look at my part. My part in it is a completely different sense of understanding from the rest of it.

So you’re not in a lot of scenes with lots of blood and guts?
I think everybody in the whole show is in that. It’s always centered around the worst cases of homicide and brutality that have ever been seen. Our show kind of mirrors a lot of the situations that society is going through at the present time.

But you don’t become depressed?
Oh no, no. My character is working on a spiritual level.

I read recently that people behind Blade Runner are considering a prequel or sequel. Will you be in that?
I don’t know. I would love to be part of anything that Ridley Scott is doing…It was one of the most extraordinary experiences of my whole career.

Why do you think you either choose or are chosen for those kinds of roles?
I’m not sure, other than the fact that it’s the choices that we make. Anthony Hopkins has a tremendous array of characters that have grounded the films he’s in, from Hannibal Lecter to the story about the motorcycle [The World’s Fastest Indian, 2005]. I like him a lot. I think he’s tremendous. I like Meryl Streep, too. And Paul Muni.

Why?
The reality, the emotional strength and understanding of character development. It’s just genius. I think he’s the biggest influence I’ve had, more than Brando or Pacino or any of the contemporary players. He’s way, way, way on top of the game. He’s not derivative of anybody. 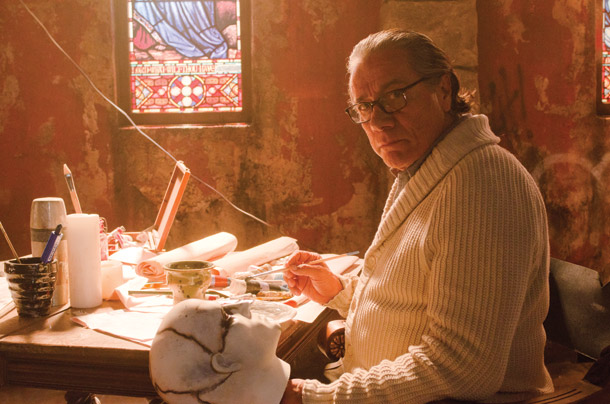 Have you thought of going back on the stage?
Yes, I have. I was on the stage last year. Right now I’m preparing a role in The Pawnbroker. It’s never been done as a play. [The movie came out in 1964.] This will be the first time. It’s starring Richard Dreyfuss. I’ll be playing his nemesis. We’re just starting to mount it.

You are very active in things Latino, both as a producer and a philanthropist. Do you think there have been improvements in the ways that Latino people have been portrayed in movies and on TV?
In some cases, yes, there’s much more understanding. In other ways, we’ve gone backward, which is really sad. We are 16 percent of the population, according to the census, though I think we’re a lot more, but we’re less than 2 percent of all the images that you see on film and television. The African American experience is that they are 12 percent of the population and 17 percent of the images we see in film and television.

But some African American people don’t feel those images are all very fair, that they’re in roles like being a gangster or a pimp.
It’s the same with us. They don’t use us to lead the story, as the protagonist of the story, or when they do, it’s very few and far between. I don’t think there’s one Latino player that you could finance a movie.

What about your role in Stand and Deliver?
Stand and Deliver was really an extraordinary experience. It’s become the most viewed film in the United States of America. In 23 years, it’s been seen by more people than any other film. It continues to be seen on a yearly basis by millions of people, because they play it in schools, to inspire the teachers and motivate the students. I’m proud that we were able to capture that man’s contribution and place him in a position so that he will forever be remembered. He continues to inspire people to this day.

You also were in the movie Selena. That was also built around a Latino person.
It was. Selena Quintanilla-Perez [who was murdered at age 23]. She was a beautiful artist who probably would have become the most influential Latino singer of the decade if not the century. She was just coming into her own. She had started so young and was such an accomplished artist.

What are some of the other things you’re doing now?
We’re developing quite a few pieces of work. I have one, Filly Brown, that will probably be coming out in November or December or maybe January. I produced it and I act in it. I play an attorney. The story is about a young Latina woman who is a singer. And it’s a love story between her and her mother. She’s trying to help her mother and trying to bring the family together.

Did this story speak to you because you sang in a band?
Yes, I loved my life as a musician. I continue to appreciate all the years I spent on stage.

You’re playing a theologian in Dexter. Are you religious yourself?
Spiritual, not religious.

Did you grow up in a religious household?
We grew up in a very interesting one. My mother was quite a woman. She’s still alive, she’s 85. Anywhere there was a church we would pass that was filled, she would stop and go in. We started off in the American Baptist Church, and then went on to Catholic Church. Then we learned about Judaism, and the Methodists, Episcopalians. God Almighty, there were so many different ones. This was all in Los Angeles. It was all for the purpose of understanding that we are all similar to one another.

You said “we,” so you must have siblings.
There are seven of us. I have three brothers and three sisters. I’m the second oldest. Of my sisters, two are nurses, like my mother, and my other sister works for the Johns Hopkins gifted children’s program. My father started off as a welder. He did that for 25 years and then he worked in the post office for 20 years as a clerk.

A movie mentioned on your company’s website, America, seems to be at least partly in Spanish.
We’re looking for distribution now. It just played the New York Film Festival this week.

Did you grow up speaking Spanish?
No, they would hit us in school if we spoke Spanish. I made a film about it, Walkout. [The 2006 HBO film Olmos directed is about a 1968 action by high school students in East Los Angeles high schools protesting unfair treatment, including being punished for speaking Spanish.] We spoke English at home. My great grandparents and grandparents spoke Spanish mostly, and we were to respond in English.

Do you still sing?
I just did it the other day in a fundraiser for a nonprofit children’s organization. It was a lot of fun. It was rhythm and blues and rock.

Are you still friends with your former band members?
Yes. I still have strong ties with that musical world. I really appreciated that world. Three of my children are in music as well as in film. Five of them are in film. I have one that isn’t. Right now she’s basically learning.

How old are they?
They range from 40 to 12. I had two children with my first wife, and then I’ve adopted four. I adopted three by myself, and the youngest with my third wife.

So what do you do?
We all work together.

You must like that.
It is probably the blessing of all my blessings, the gift of all the gifts that I’ve had.