Within the solitude of a bucolic, weather-warped barn in Springs, Jackson Pollock abandoned traditional artistic conventions (e.g., paint applicator types, canvas positions, representational boundaries) and developed the “drip technique,” an immediate expression of the painter’s unconscious achieved through assured, free-form movements, and the deft immersion of mind and body in his work. 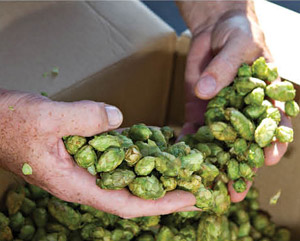 Similar to the artist who defines his work as an extension of self, or an exposé of psyche, Cotter and Burford (president and brewmaster, respectively) regard beer-making as more than an interest and occupation; to the two partners who befriended one another as patrons of Fadeley’s Deli Pub, and later, became co-workers at the now-defunct Cobblestone Winery and Brewery in Huntington, beer is life.

“Beer is a constant-evolving thing and we still don’t know much about it,” says Burford. “It’s an interesting mixture of science, because you’re experimenting with living organisms and art, because you’re always creating. We just try to give it our best shot.”

On an oppressively humid morning in early September, Burford and Cotter arrive at Blue Point Brewing Company—a chain-garaged stretch of fermenters, forklifts, bottle lines and grain sacks—with caffeine and an aura of enthusiastic uncertainty. While their multi-brewer craft-staff labors five days per week, often performing double-shifts, and is accountable for an estimated annual production of 50,000 barrels of beer (equal to 1,550,000 gallons), today’s brewing schedule possesses no similarity to prior Blue Point batches.

It is void of repeat staple recipes and without personal precursors.

“We just have to wait and see if the truck comes on time,” says Cotter, gesturing toward his watch. “If it does, then we’re in business.”

Less than twenty-four hours prior, an email was received from Hopunion, a vertically-integrated hop purveyor based in Yakima, Washington; that morning, a brown-boxed collective began its cross-country trek to New York. Its contents: One hundred pounds of wet hops.

Hops, one of beer’s essential ingredients, are the female flower cones of the Humulus lupulus plant, used to impart bitterness to balance malt profiles, provide desirable aromas and preserve fresh quality. Breweries will often use conventional pelletized or dried whole flower hops, which are easily obtainable and year-round usable, compared to moisture-dense wet hops, available only once per year (hop harvest occurs during late-August/September) via reservation, contract or one’s own farmed plants.

While dry hops are utilized within all beer styles, during all seasons, wet hops are reserved for smaller, autumn-period batches, often accompanied by an agricultural name and narrative. If wet hops are employed in a recipe, it must be almost immediately following their pluck from the lupulus bine, when the flower’s natural oils and resins (and consequently, its fresh flavors) are at their peak.

“Wet hops begin to lose their characteristics and their fresh, distinct flavors seconds after they leave the vine,” explains Burford.

This time-race poses minimal concern for breweries that cultivate their own hops or have direct access to farms doing so; the process from bine to brew kettle can be completed in minutes. But for Blue Point Brewing Company, unclassifiable under either category, the sole alternative is a commercial hop supplier, such as Hopunion, to provide the necessary ingredients.

“Our name was up on Hopunion’s waiting list, and the hops were ready to be shipped, so we dropped everything and decided to make a new beer,” says Burford.

“We’ve never used them before, so we’re a bit nervous,” adds Cotter. “But this is as fresh as fresh can be. This wet hop experiment will be part of our history.”

As the afternoon arrives premeditated, Cotter and Burford traipse about the brewery, inked-and-scribbled papers clutched, formulating flavor concepts for Wet Hop Pale Ale. They hope to create a “well-balanced pale ale with the rich pine and resin only wet hops can impart,” while offering “that trademark, West Coast skunk.”

Maneuvering around chugging machinery and sidestepping puddles emanating from clamped hoses, the two co-founders are contemplative, perhaps entranced. Similar to Pollock treading on canvas with alkyd enamel-blotched boots, fifty-three years prior, they exist only within their work.

This immersed state is further amplified by an almost-inaudible voice from the loading dock.

As staff collects outside, two wet hop varieties, Amarillo and Simcoe, harvested by Virgil Gamache Farms and BT Loftus Ranches, Inc., respectively, are trucked into the premises and unloaded. It is the first shipment of hops from Hopunion to the East Coast.

“I can’t get over the aroma,” says Cotter, his oily, cone-piled palms to his nose. “This is why we do what we do. You just fall in love all over again.”

“This is the creative part,” Burford says, after his decision to include the last ten pounds of hops into the boil. “We’re hoping more flavor will be released from the heat. But it’s a constant experiment. We’ll have to see how it turns out.”

What began as an email from Washington is now a cooling, amber-hued liquid, encased within one of Blue Point Brewing Company’s fifteen fermentation tanks. The fermentation process, or the conversion of glucose, via yeast, to ethyl alcohol and carbon dioxide, will last “about three weeks,” when Wet Hop Pale Ale is ready to be served exclusively in Blue Point’s tasting room. There, it will encounter a myriad of palates, and subsequently, opinions of its flavor profile, aroma, and complexity.
People will taste. People will discuss.

Yet for Burford and Cotter, their satisfaction derives from the process of brewing, more so than the result.

It is the process, which defines their art.

“You’re building something with your hands, and every day is different,” says Cotter. “It’s been a good ride so far.”