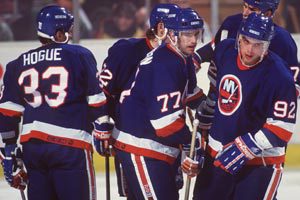 The Islanders have done a good job of honoring their history over the years, primarily because it’s the only time they can focus on good hockey and winning. That doesn’t happen much in the present tense.

On Saturday, Oct. 29 they will honor the 1992-93 hockey team when they play the San Jose Sharks. Yes, we know, you can’t believe it’s time to honor that group of guys already. Twenty years goes by quickly.

Best remembered for its underdog playoff run to the Eastern Conference Finals, the 1992-93 team included numerous fan-favorites, such as Pierre Turgeon, Steve Thomas, Benoit Hogue and Patrick Flatley, who are set to attend the game.

“I’m really excited to reunite with our great Islanders team from 1993,” said Turgeon, the team’s leading scorer that season with 132 points, in a statement. “The group of guys we had were underdogs in each series we played in but I remember it did not feel that way when we stepped onto the ice in front of those loud Coliseum crowds.”

Islanders fans will have the opportunity to meet numerous members of the squad prior to the game in a select meet-and-greet session. Along with the pre-game player availability, the alumni will also participate in an on-ice opening ceremony.

“The one thing that stands out about our ’93 team was that we all believed we could win,” Hogue said, also in a statement. “As a former player still living on Long Island, that excitement that Islanders fans had for our team is still there. The current Islanders team has that same belief, that no matter what anyone says, they’re committed to winning for their loyal fans.”

The event is part of the Islanders “Decade Nights” promotion, which will celebrate various Islanders teams and alumni throughout their 40-year anniversary celebration. Other “Decade Nights” will see the team honor notable alumni with induction into the Islanders Hall Of Fame. Each of the former players will have their names placed on the Islanders Hall of Fame banner that hangs from the Nassau Coliseum rafters. In addition, a brass plaque, depicting each player as well as a list of accomplishments and contributions to the organization, will be mounted in the team’s dressing hallway.