Streaks of color, miniature trees and accurate starry skies can be expected in Jason Paradis’s art. So can installations featuring taut colored strings that create zooms of motion. Installations are what happens to paintings when they morph from idea to flat art to three dimensions occupying a swath of space.

“I use installation when the flat work seems to have more of a voice,” said Paradis surrounded by his paintings and a single installation at St. Joseph’s College. “Sometimes it seems like there’s something dimensional about it and it needs to be more than remaining a painting.”

Installations typically feature a cadre of strings zigging and sometimes zagging from wall-installed paintings. The vivid-colored strings stretch to connect with sculptures installed on the floor or to a bench and create multi-level connections. Sculptures may feature hand-selected rock chunks that suggest a pristine mountaintop. Model-sized trees conjure an isolated majesty connecting to a sky filled with stars, galaxies and possibilities lying beyond what the naked eye can see. 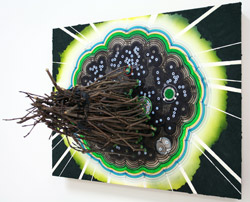 “In my art, there’s a sense of contemplation or reverie that speculates on the fundamental mysteries,” Paradis said. “I used to go camping a lot as a kid growing up in Canada. Looking at the sky, questions emerged regarding the existence of something much larger than our immediate world.”

Starry night skies appear in many of Paradis’ paintings. Star placement is not random—each night sky is based on a specific date from the artist’s personal history, dates relating to art history or sometimes even dates relating to his art shows (among other catalysts). A computer program provides celestial locations from the past, present and future, he said. This visual information is projected and recreated in his art as a prominent underlying image. From there, layers of paint using multiple application methods move the scientific charting into art. Paintings are infused with texture. Different materials are layered into the painting to mirror the layers of meaning in the artwork, explained Paradis.

Implied motion zipping along at fast speeds may also have its origins in Paradis’ childhood memories of viewing the night sky. Witnessing a falling star, a companion suggestion the star may have perished eons ago and was only visible to them now. The implications made a lasting impact that can be felt in his art, Paradis revealed. Vivid colors are also important. Paradis mixes his paint colors to ensure hues applied are exactly what are needed. 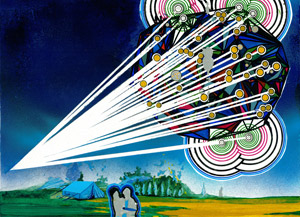 Recently, Paradis’ art is being inspired by memories and histories other than his own. These new works are the subject of a solo show at the Sea Cliff Library. Jason Paradis: Recent Work is on view from November 1 to December 31. A reception is planned for December 11 from 2 to 4pm.

Paradis has exhibited at the Islip Art Museum and the Aldridge Museum of Contemporary Art in Ridgefield, Connecticut. He’s exhibited in galleries in Canada and Scotland. Also, Nashville, Philadelphia, Brooklyn and more. A solo show, One Moment: Past, Present, Future, was presented at St. Joseph’s College in Patchogue in September. Paradis is a professor at St. Joseph’s College and SUNY Stony Brook. jasonparadisart.com. 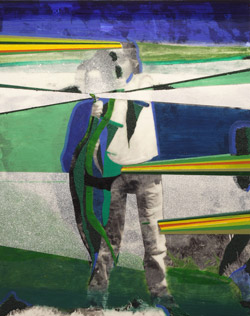 Jason Paradis’ creativity goes beyond his own art making. Paradis has been a curator for “In Process”—a studio residency program of the Carriage House at the Islip Museum—since 2008. When given a spot as guest curator at the OMNI Gallery in Uniondale, he decided to present a mini survey show of artists who participated in the “In Process” residency. Held in two parts, the exhibitions bring a slice of cutting-edge installations, art projects, video and mixed media art projects to Nassau County. The Carriage House at the Islip Art Museum is a year-round project space and artist residency.