Stony Brook University graduate Marielle Frey thought it was unfair nails always get hammered into wood, sheetrock or metal—why not reverse the relationship and give nails a chance to do some whacking?

That train of thought inspired Frey as she made “Nail Karma,” a six-foot tall hammer made out of hundreds of nails welded together. It’s currently University President Dr. Samuel Stanley’s favorite piece in the second annual juried art competition at Sunwood, Stony Brook’s off-campus conference venue overlooking the Long Island Sound in Old Field Village. A small part of Sunwood also serves as the home of Stanley and his wife, Dr. Ellen Li.

The conference center’s walls were bare when the couple first arrived at Sunwood in 2009. Robert Kenny’s art filled the cedar shake-sided mansion when his wife, Shirley Strum Kenny, served as president. But the Kenny’s took it when she retired.

Stanley and his wife had not seriously collected art before arriving at Stony Brook, but he liked what he saw at his 2009 inauguration. “I was impressed by the quality of what was done,” Stanley said. “It combined well with the need I had when I first came to Sunwood.” 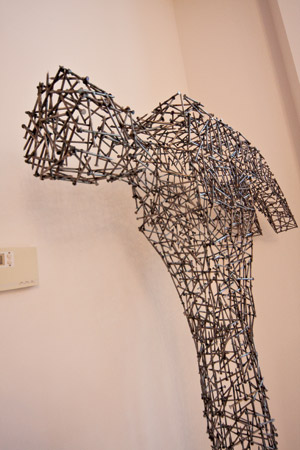 Stanley saw the white walls as an opportunity to showcase student art, which only occasionally makes it into off-campus galleries and exhibition spaces, and is sometimes overshadowed by the science and research accomplishments at the institution.

A few layers of review stand between student projects and a coveted placement at Sunwood. Throughout the year, Stony Brook’s art faculty picks out exceptional pieces for a small committee of university affiliates to review, said university spokesperson Lauren Sheprow. Then, in April, the committee whittles down the work to a best-of-the-best collection for the president and his wife to choose from, explained Carol Marburger, a committee member. Marburger is the wife of the late Jack Marburger, the former university president, Brookhaven National Laboratory director and science advisor for President George W. Bush.

Committee members select art based on personal preference. But the group also tries to find pieces that are diverse in terms of media and subject. Sunwood’s historical style factors into their decision-making process, too. “There are pieces we love and pieces we appreciate but would not want to live with every day,” Marburger wrote, adding that her favorite is a linocut print called “String Cheese Trapeze” by Stephanie DeSimone.

Having a work featured in Sunwood is a distinction in the Stony Brook art department and means major exposure for burgeoning artists. Between 30 and 50 events are held in the mansion each year, with a maximum of 125 guests at each function. “People have sold their work from there,” Frey said. “It’s a great opportunity to say your work is there.”

Frey’s work is on display with other standout pieces including life-size topless dancing women painted in primary colors, a ceramic piano key sculpture and a small picture of two soldiers standing on top of a humvee in Iraq. The future Stony Brook master’s candidate scored a sale after “Nail Karma” made it into Sunwood. A visitor who Frey declined to name commissioned her to make a smaller version of the work as well.

“I was shocked everyone loved it so much,” Frey said. “I think people can see the obvious relationship between the material and object, and a lot of people can relate to it because it’s about karma, and doing things people say you can’t.”