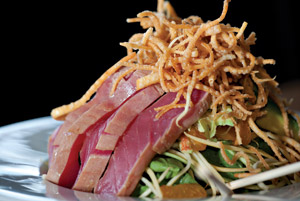 Restaurants often write their own reviews. Perceptive diners need only keep their eyes and ears open. At Left Coast Kitchen, which opened in Merrick earlier this year, I heard a diner say, “It’s noisy as hell in here, but the food is good.” When another patron commented to a waitress about the large dessert portions she replied, “We’re into gluttony here.” Then there was the pleasant, personable young maitre d’ whose style of dress symbolized the spirit of the place. He wore a shirt and tie, but the shirttails flapped out over his jeans rather than being tucked in while a rag or napkin hung down from his back pocket.

We could stop right there, for we have been told that the Left Coast Kitchen serves large portions of good food, in a loud, laid-back, unpretentious setting.

These observations were right on target. The rollicking, raucous Left Coast Kitchen is a casual, informal American bistro or gastro pub with a bar upfront, bare tables and floors, a pressed tin ceiling, mirrors and a working, not a showplace, open kitchen. While it’s anything but serene or sedate, it’s obviously a restaurant on a roll. On both a weeknight and a Sunday, the place was packed. Every seat was filled and many customers waited for tables in that sloped-roof bar or tap room.
Although the food here is robust, no nonsense and full flavored, don’t expect the niceties. Dishes are often auctioned off as in “Who ordered the hot ‘n slurpy noodles?” nor should you be shocked if your silverware isn’t replaced for the next course.

The lead player among the likable people here who display not a trace of attitude or pretense, is chef/owner Chris Randell whose wife Heather runs the front of the house. Mr. Randell, who moved from City Cellar in Westbury after racking up impressive culinary credits in California and Manhattan, pops out of the kitchen and pitches in serving, cooking and chatting with diners. His enthusiastic, upbeat, informed persona sets the tone for his restaurant. Mr. Randell’s food is not subtle or delicate, but an upscale version of pub classics prepared in his simple home-cooking style. 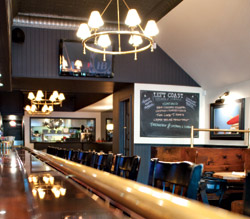 There’s also plenty of spicy kick for those who enjoy it. They should try the no-joke spicy beef taco ($11) starter filled with shaved strip steak and three cheeses resting on a bed of snappy crushed avocado and incendiary Salsita Diablo and poblano chiles. Dipping the four, firm, fresh shrimp from the colossal shrimp cocktail ($13) in the two-alarm cocktail sauce will make them happy as well, as should the plentiful skewers of Buffalo chicken and shrimp sate ($12). A small but special jumbo lump crab cake ($13) is pepped up by its sweet corn relish and pesto aioli.

Only some brick-hard cookies ($3) were disappointing at dessert time. The homemade vanilla, orange bread pudding yielded more vanilla than orange flavor until we spooned up its orange sauce and poured it over our huge portion. Both the warm, molten lava cake ($9) and the bowl of Oreo/brownie sundae ($8) with rich chocolate gelato and whipped cream were decadent delights (although their peanut butter and peanut butter sauce added little to the dishes). You will not go wrong with the silky-smooth fried cheesecake ($8) or a huge dessert of the night special, a plum and apple crisp ($8) covered with crumbs and topped with a generous scoop of vanilla ice cream.