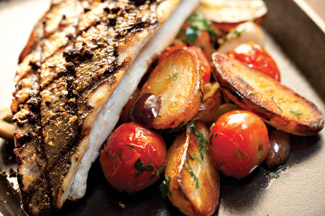 It’s virtually impossible to order a bad dish at MP Taverna in Roslyn. That’s because chef/owner Michael Psilakis is preparing the same rustic, authentic, delicious Greek home cooking his mother served to him when he was growing up in East Northport (although he gives some of it creative twists). She knew what she was doing and so does he. What’s more, Mr. Psilakis (yes, the MP Taverna is named for Michael Psilakis) is a man on a mission. He believes Greek food deserves the same attention and respect that is properly accorded Italian and Asian cuisine, that it should be as much an everyday choice as they are. (He believes Greek cuisine is a combination of Italian and Middle Eastern.) Nobody who samples his cooking at the no-nonsense, food-first MP Taverna will be likely to argue with him.

There is a reason every seat has been filled every night since the restaurant opened in May. At MP Taverna, prices are modest, portions are generous, service is swift and the food is consistently superior. In other words, he and his concerned crew know how to run a restaurant. He proved that in Manhattan where he operates the successful Kefi and Fish Tag eating places and earned best new chef recognition from Food & Wine Magazine, and Chef of the Year awards from both Bon Appétit and Esquire.

Like his city ventures, MP Taverna is an earthy everyman restaurant that shuns elitism. There’s admirable flair, but no phoniness or pretense to the food. From the crusty peasant bread that proceeds dinners to the Greek dessert staples like baklava, galaktoboureko and rich, thick yogurt that ends them, there are no weak sisters. Although some dishes are better than others, there simply are no strikeouts. The roasted lemon chicken ($15) with dill and garlic roasted fingerling potato, for instance, is a gentle little dish and all that it should be, but not nearly as innovative or exciting as the prawn and green vegetable risotto ($18): long, heads-on, though shelled, shrimp below a hill of rice laced with fresh, vibrant peas, fava beans, zucchini and arugula. Other equally impressive entrées, some of which despite being simple, straightforward dishes, yielded unexpected complexity, were five or six (depending on size) tasty, flawlessly-grilled lamb chops (at $25 the most expensive, everyday menu entrée) garnished with seasonal vegetables like zucchini, cherry tomatoes and red onions that offered a choice of five salads as well. Those cherry tomatoes, olives and fingerling potatoes also accompany a marvelous rendition of grilled and filleted branzino ($19).

Impressive as the main courses were, appetizers were even better, and often more interesting. The soft, almost sweet octopus ($11) perched on a bed of Mediterranean chickpea salad caused one diner at our table to say, “I’d return here just for that.” Flavor-packed meatballs ($7.50) in a tomato sauce alive with onions and olives are in the same don’t-miss category. Scallop lovers were delighted with the unexpected farm-fresh cauliflower and dried cherry that boosted the tender shellfish beyond the usual ($11.50).

The feta-laced salads should also be given serious consideration. The MP is a chopped salad for the ages with its amalgam of lettuce, tomato, cucumber, olive, onion and peppers, and the tomato salad sports string beans and grilled onions.

While desserts weren’t at quite the exalted level of appetizers and entrées, they were anything but a letdown. Best was the apple baklava Napoleon ($7) served with a scoop of Amaretto or maple walnut ice cream, followed by the dense chocolate halva (sesame seed) brownie ($8) and thick Greek yogurt ($7) embedded with seeds and honey.

Had one appetizer not been auctioned off and had our wine arrived before, rather than after, the entrées were served, MP would have received five stars, which is nevertheless what its food deserves.