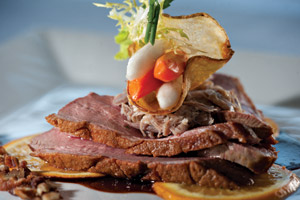 Wave, the restaurant at Danfords Hotel and Marina in Port Jefferson, is becoming more than just a pretty face. Over the years its been known mainly for its waterfront setting and panoramic views of the Long Island Sound, ferries and marinas rather than its mediocre, forgettable food. Recently things began changing for the better. Renamed Wave Seafood Kitchen by the new chef Jonathan Levine, the restaurant now offers a new concept and menu as well as name. Mr. Levine, who has made a number of trips around the culinary block since he attended Johnson & Wales University in his hometown of Miami, is pursuing a “farm to table” regimen featuring fresh local produce and regional seafood. Incorporating stops he has made at big name restaurants in Manhattan (Park Avenue Café), the Caribbean (the Ritz-Carlton Hotel in San Juan) and Las Vegas (Restaurant Guy Savoy at Caesar’s Palace and the Buffet at Wynn), he has introduced a preview menu that’s more refined and creative than those previously available at Danfords.

The likes of bacon-wrapped dates with applewood bacon and almonds, a tasting of three ceviche and banana mille feuille were anything but staples on the restaurant’s menu prior to Mr. Levine’s arrival. While he has already bumped Danfords quality and diversity up a few notches, we suspect the “preview” implies that his menu is a work in progress with more to come.

Although that menu might be in a state of flux, the subdued, carpeted dining room has been brightened up a bit, but remains insistently nautical with its emphasis on seascapes and sailing ships while warm-weather dining on the outdoor Admiral’s Deck offers a most pleasant experience.

Among the starters: Buttery, rich, homemade papardelle pasta ($13) replete with summer squash, black truffles and stuffed squash blossom as well as a huge, superior Caesar salad ($8) powered by crispy anchovies grabbed top honors. Nor was there anything wrong with two crab cakes ($14) boasting plenty of crab meat with apple fennel slaw in a tangy lemon coriander sauce, lobster arancini ($14) three deep fried balls resting on a touch of fennel aioli contained much rice but only a diminutive hint of lobster. 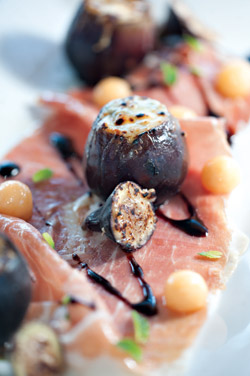 Chef Levine has a gentle, knowing touch with flat fish. Both the Atlantic cod ($28) with local Maitake mushrooms and a scant sampling of potato gnocchi in lobster brown butter, and a local striped bass ($29) presented with lentils, arugula and truffle beets, were moist, fresh and fine with nary a hint of the overly-strong fishy flavor often encountered elsewhere. Also recommended is a generous, diverse serving of seafood couscous ($34) with more than adequate quantities of lobster, shrimp, clams, mussels and scallops and a lip smacking bouillabaisse sauce that infuses the couscous with admirable flavor, and a big, gristle-fringed, bone-in New York Strip steak ($37) that packed robust minerally flavor and was enhanced by its port wine sauce.

Among the sweet finales were a rich, dense, above average cheese- cake ($9); a chocolate mousse dome ($10) with a good concentrated raspberry reduction; a galette of apple with a big scoop of vanilla ice cream; and a layered banana mille feuille ($11) whose banana was somewhat obscured by its dominant chocolate flavor.

The kitchen at Danfords is well ahead of the restaurant’s affable but inexperienced, unpolished waitstaff. Servers needed to question diners about who ordered what when delivering dishes, seemed almost clueless about wine service (pouring the host’s glass first rather than last, then going round robin rather than ladies first) and failed to promptly refill the basket of good coarse crusty bread.