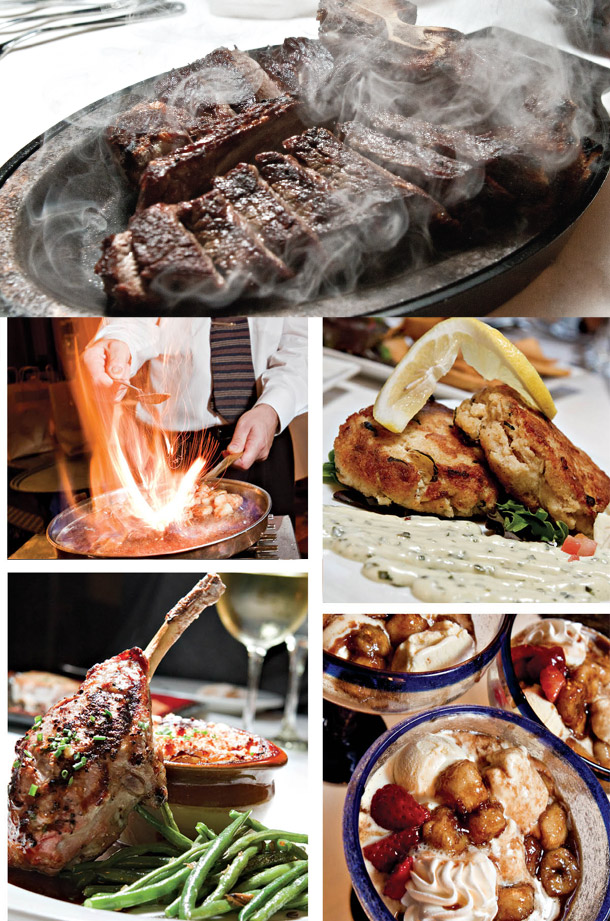 I packed the clubs in the car and waited for Brian and Vic near the white columns at the front door of Blackwells. We played eighteen on the golf course and my stomach was growling. “You guys up for steak?” I asked when they walked up.

We went into the lobby and I approached the maitre d’ while Brian strolled around, checking out the golf trophies and memorabilia. Vic ran his finger over the lobby piano and took a seat in a comfy looking leather chair.

I asked the maitre d’ table which room would be best for us. “The library room is a little more romantic, but you guys seem like you’d prefer the main dining area. There are good views of the golf course from either.”

We followed him to a candlelit white clothed table and started off with a round of Blue Point beers. I explained to the waiter that I was here last month for a golf outing and there was this great artichoke dish served. “Fried artichoke, the carciofi fritti,” he said. “They usually have it for weddings and special occasions, but I could rustle some up for you.” His warm, accommodating manner fit right in with the casual vibe of the place and remained steady throughout the meal.

Brian and I ordered porterhouses plus chick pea flour chips, calamari and crab cakes. Vic ordered the swordfish on petite French lentils. The waiter walked off, leaving us to enjoy the surroundings. One full wall was covered in wine bottles, another had a view of the bar through glass and large picturesque windows overlooking the fairways outside dominated the third.

I crunched on a chick pea flour chip, a warm and tasty Parisian street food that’s somewhere between a pita chip and a corn tortilla. I quickly moved along to the artichokes. Brian shook his head at them, but when Vic tasted one and raved, he took a small nibble off, considered it for a moment then ate the rest. The plate was empty in mere minutes, leaving nothing of the lightly fried artichokes.

Our conversation skidded to a halt when the porterhouses made their entrance. They came out on hot plates with plumes of smoke and the aroma of sizzling steak and melting butter wafting through the room. The waiter set up a serving station and did his preparation tableside. It was impossible to wait before digging in. The steak was perfectly cooked, with a nice crust holding a juicy, tender dream inside.
On the way out, we saddled up to the elegant yet casual bar for a nightcap or three. We loosened our belts, watched the game and whiled away the evening over a few glasses of fine Scotch. 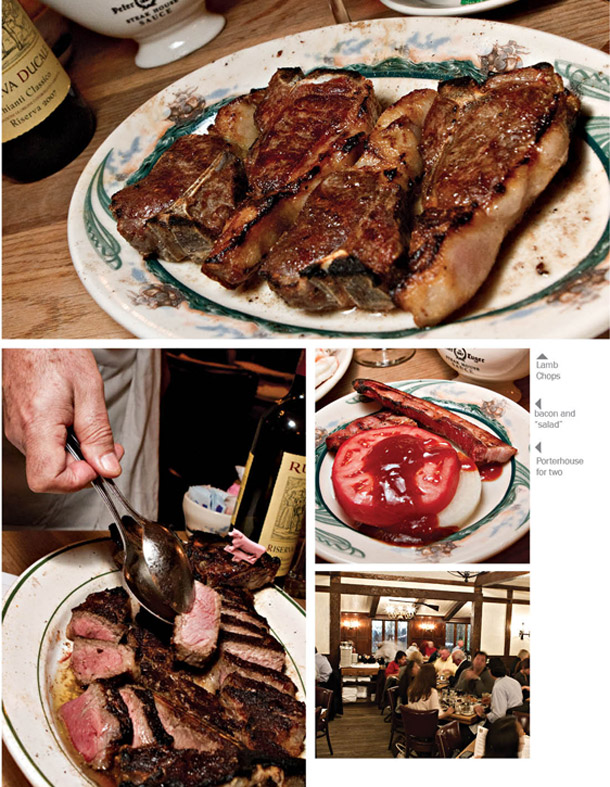 My phone rang as I left my last meeting of the day. “Hey, it’s me,” the voice said. “Still on for dinner? I’ve been in New York all week and still haven’t had a steak yet.”
“Let’s hit steakhouse row. Peter Luger.”

I traded my car for a valet ticket, strolled into the lobby and met my friend at the bar. We were led into the Tudor-style dining room. A decidedly German feel emanated from the surroundings. From the thick wood ceiling beams above to the wood floor and the bare wood tables, it felt like an elegant but distinctly manly lodge in a throwback sort of way. Speaking of throwbacks, the only credit card Peter Luger accepts is its own, otherwise it’s cash or check only.

Knowing I was going straight for a porterhouse, I waved my hand at the familiar waiter when he offered a menu. Like much of the staff, he’s a lifer here and seems to be here every time I visit. The thick porterhouse is meant for two, but no self respecting steak lover would share this meaty sensation.

We tore through appetizers of thick bacon slices—grilled with a nice char to them, they’re almost as thick as the steaks. The jumbo shrimp were just as big and bold, as is most everything here. Then delivery of the porterhouses was made. The thick cuts came on hot plates, still sizzling. The waiter served a few slices to each of us and placed the hot plates in the center of the table, leaned on an upside down saucer to make the jus pool on one end of the plate. He dipped a spoon and drizzled the mouth-watering jus across my steak.

We dug into our steaks and the flavor roared like only the best prime beef can. Its journey from cow to plate starts with PL family members’ daily visits to slaughterhouses. They make their choices based on color and smell, and pick the best of the best by branding them with the Peter Luger mark. Racks of beef are shipped directly to the restaurant and all the subsequent butchering and dry aging is done on premises. A rarity: They’re the only ones on Long Island who have the honor of their own on-premises dry aging room.

We polished off our steaks and were ready for the signature dessert—the holy cow, a hot fudge sundae with nuts that comes in the shape of a cow. An always-satisfying NY cheesecake and a solid cup of coffee left us in a food-stuffed silence. 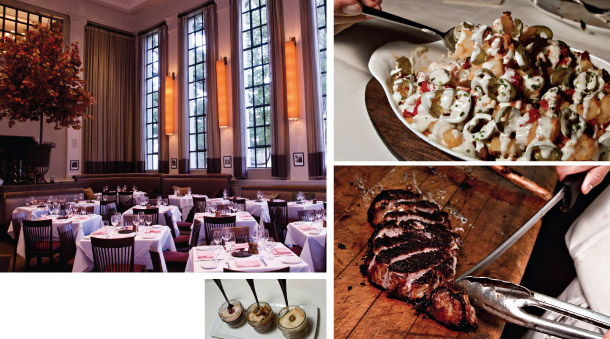 I ironed my best slacks and shirt before this one. She said she was game for anything from steak to seafood and I wanted to impress. And if I could find a woman who enjoyed a thick, juicy rib eye as much as I do, I’d be the one who was impressed.

We pulled up to Tellers, a commanding, vintage stone building, which used to be a bank, hence the name. The original vaults are still inside and have held the treasures of Tellers’ extensive wine list since the Bohlsen Group opened it in 1999. The grand dining room is considered among the most attractive in any restaurant on the entire island and I could not argue that. The vastness of the room, with its ultra high ceilings and 30-foot tall windows with original steel frames, harkens back to a bygone era.

We sat in a comfortable cushioned corner booth. Around us, the scene was like an old movie about the roaring twenties where the well-dressed people were in similarly dramatic rooms and the frost on the windows was authentic (it is here, too).

The variety of seafood appetizers—scallops, oysters, clams, lobster, crab cake, shrimp, calamari—were all the surf we’d need before digging into the turf. We also munched on the house duck fat French fries, which are lighter and crispier than your garden-variety fry. The south shore vibe carries through all the fresh seafood choices to the vintage photographs of people fishing, racing and sailing, which decorate the walls of both the downstairs and upstairs Gallery room.

Finally, the main event: The Tellers rib eye. USDA prime, dry aged, as well as being my personal favorite cut of beef, I knew we couldn’t go wrong. Tender and with strong mineral flavor, the thick, perfectly cooked, juicy steak screams out to the inner carnivore. We sipped the wine the waiter recommended from the impressive list, the eminent Opus One Cabernet Sauvignon from Napa, and all conversation became non-verbal as we enjoyed the steak from heaven.

For dessert, we split the trio of pies in a jar—linzer torte, pecan pie and apple pie—each safe in its own glass mason jar, apt vessels that brought a nostalgic touch to a happy ending.