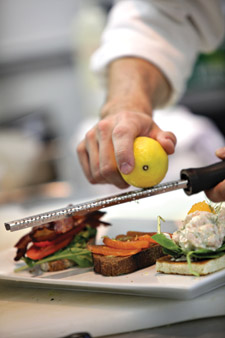 Admit it, you’ve never eaten Swedish. Those meatballs you thought were different? They weren’t even close to Scandinavian, were they? This is your chance to redeem yourself and finally taste the cuisine you’ve inadvertently been ignoring.

Before coming into the care and nurturing of Swedish hotelier Jenny Ljungberg in 2008, The Maidstone Arms was holding its own as a fashionable, as well as historic, Hamptons spot. The new owner brought with her new ideas and levels of chic, seamless hospitality management. In The Living Room, she infused the richness of her native land to meld with nouveau Hamptons cuisine steeped in the slow food philosophy.

Entrées are rich and rewarded. Köttbullar (aka Swedish Meatballs) are made of lamb punctuated with zesty seasonings in a very light tomato sauce with ricotta, egg and parmesan gnocchi, and coiffed with cheese and kale. Berkshire pork tenderloin is super tender, ginger-green onion-garlic goodness grilled on super high heat and joined by potatoes whipped as smooth as milk, peppery mango and wilted pea tendrils.