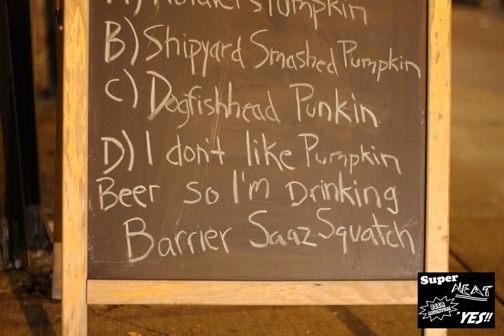 There was an alleged sighting of Barrier Brewing Company SaazSquash, a new, ale-like cryptid purported to inhabit Park Slope and encompassing neighborhoods within Brooklyn, at Bar Great Harry on Saturday, 11/5.

Unfortunately, no photographic evidence of SaazSquash was obtained. 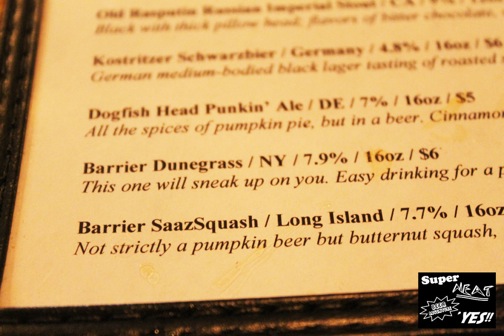 The antithesis to the all too common pumpkin-pie-in-a-glass beers. SaazSquash is an autumnal spiced ale brewed with raw butternut squash, dried ginger, clover honey, and Sichuan peppercorns, and finished off with German Saaz hops.

The ginger provides a strong spicy aroma and adds a pronounced bitter bite along with the peppery German hops that cuts through the richness of the squash and malts, while the peppercorns add a distinct earthiness and a faint cooling sensation to the tip of your tongue from special compounds contained within the kernels. The honey provides a subtle sweetness to the aroma but the sugars are almost entirely fermented out by our house yeast, leaving the beer with a high ABV but a dry, crisp finish. If sweet, pumpkin pie ales aren’t your cup of beer, then say hello to SaazSquash.