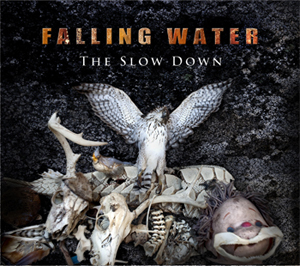 The longtime frontman for funky bar band Circus Mind, Mark Rechler had a collection of dark rock songs that needed to stand on their own. So the Long Island native started the band Falling Water—guitarist Bill Titus, bassist Chris Crosby, drummer Dave Diamond and Rechler on vocals/piano/keys—to record his reflective bluesy, rock songs about addiction, loss, and seasonal affective disorder.

“I’ll be the first to admit that as the days get shorter and the shadows get longer, I battle with my own set of seasonal depression,” says Rechler. “’The Slow Down’ helped me release my demons and I expect it’ll find the same home among listeners battling similar situations.”

Elton John, Belle & Sebastian, Roger Waters, Wilco, and his favorite artist, David Bowie, influenced Rechler on Falling Water’s cathartic debut EP, “The Slow Down.” While it can be classified as Adult Alternative, the music is still appealing to younger listeners by combining modern synths and guitar licks with heavy key fills.

Rechler has made music for Discovery Networks and played with members of the Meters, the Neville Brothers, Soulive, and Bob Marley’s band. A former architect who designed and worked on “many of the funkier office and industrial buildings around Long Island,” Rechler says the name Falling Water is a “double entendre between architect Frank Lloyd Wright’s famous house and rain,” or tears.

When Falling Water plays Sullivan Hall in NYC for a CD Release party on Friday, November 18th from 8:30-10:30pm, you can expect to hear songs from “The Slow Down,” some new songs from their forthcoming full-length, and “a few cool, related covers.” So get ready to rock, and reflect, for the holidays…

For more info check out: www.fallingwatermusic.com