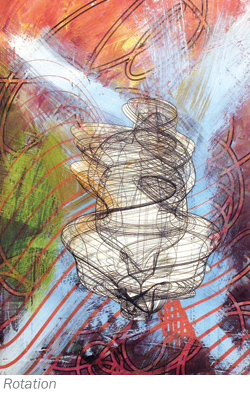 Colin Goldberg’s artworks are like surprises. Even when found expectantly on a gallery wall or in a virtual gallery, Goldberg’s compositions seem to come from nowhere and burst into being. They demand attention and then won’t let go. Goldberg’s art doesn’t just project energy; it teems.

Some pieces have see-through forms that seem to be in mid-twist just before swirling away beyond seeable surfaces. Futuristic landscapes set in an imagined galaxy are another playground for Goldberg. Other compositions present Goldberg’s version of sedate: Seemingly classical forms gracefully pose so viewers can ponder their heritage, possible meanings and why they aren’t exactly like anything seen before.

Goldberg is part of a new generation of abstract artists. He’s also a techie. Whirl together a love of digital technology, sci-fi, abstraction, gestural marks, artistic exploration and intuition, this is the stew from which Goldberg’s artwork bubbles. Despite the high-tech tools, Goldberg’s art is couched in art history, too. His abstract art channels the unconscious gesture just like the abstract artists in the fifties and sixties. Like the pop artists of the seventies, Goldberg uses industrial tools to make fine art; his toolbox happens to be computer technology.

“I’m lucky to be born in a time where I get to be a first-generation artist working with digital tools,” Goldberg said. 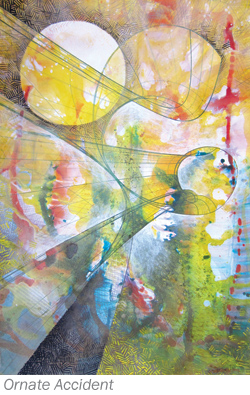 Goldberg’s multi-step practice can incorporate photography, digital art making, drawing, painting, Photoshop, Adobe Illustrator and other tools and methods. Many times, Goldberg’s art begins with a “painterly ground” on paper or canvas made with acrylic, latex paint or ink wash. Functioning almost like an underpainting, the ground becomes a springboard to evoke an artistic “response” using digital technology.
The newly-created visuals are layered on top of the painting using silkscreen or pigment printing. Sometimes the work remains as is. Other times, Goldberg paints on top of the print.

The artist is big into using technology to make art (this includes making art for mobile applications such as the iPhone and iPad), but his art concerns are no different than those of artists working with more traditional methods of expression like paint brushes, charcoal or collage.

“Artists have been experimenting with materials for centuries,” he said. “The digital age will not supplant the traditional arts but will expand them. The art world is changing because of technology. As an artist, I’m using the tools that are available to me. It would be foolish not to explore what technology has to offer artists and the possibilities for making art.”

When making his abstract works, Goldberg explores the possibility of gesture and allows spontaneous discovery to lead where it may. It is the unconscious and the quality of the implied gesture that drives Goldberg’s art—not the technology used to make the work.

Goldberg’s been using the computer to make art since the early eighties, he said. After setting out to become a painter, he became entranced with the digital possibilities for art making and kept going. He received an MFA in Computer Art from Bowling Green State University. 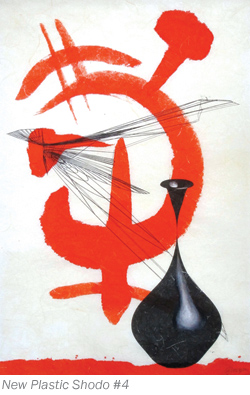 Besides paintings and digital prints, Goldberg makes video installation and interactive artwork incorporating his digital art as subject and action.

Goldberg’s work is in the art collection held by the Pollock-Krasner House & Study Center. He’s exhibited at the Parrish Art Museum, the Roberson Museum in Binghamton and galleries located in Long Island, Manhattan, California, Massachusetts and Hawaii. He lives in Orient.

Goldberg’s art will be part of the EMERGE 1.0 group show, being shown at Terrence Joyce Gallery in Greenport from December 3, 2011-January 1, 2012. The opening is on Saturday, December 3 from 6-9pm. He will also be exhibiting in a solo show at Yes! Gallery from December 17, 2011 through January 15, 2012. An opening will be held on Saturday, December 17 from 5 to 10pm. The Yes! Gallery is located at 147 India Street, in Brooklyn’s Greenpoint section. colingoldberg.com.