Bill Wyman is chatting amiably at his home in London. The former bass player and original member of the Rolling Stones left the group in 1992, after 30 years as one half of one of the best rhythm sections in rock history. Contrary to popular belief, he is still close with the rest of the group. “I’m still great mates with the band,” he remarked. “We send each other birthday and Christmas presents. We see each other and of course I’m involved in some of their projects when they’re releasing earlier stuff.”

According to him, some of the current members of the group are not happy that Wyman is no longer in the band. Keith Richards famously stated that “No one leaves the Stones unless it’s in a pine box” after Mick Taylor decided to leave the band, but the quote could perhaps be applied to Wyman as well. He told me the story of how Charlie Watts, on tour at the time, called him and told him, “I was on stage last night and I turned around to tell you something and you weren’t there!”

But he is the lesser known Stone. Few people even realize Wyman decided to leave the group and eventually form his own group, the Rhythm Kings. “I just wanted to start again and do all the things that I always wanted to do as a young boy when I joined the Stones,” he stated. The new Rhythm Kings release is Collector’s Edition Box Set (Proper American) and it includes the group’s first four studio albums and a bonus disc. Wyman spoke affectionately of the group he formed two years after leaving the Stones. “It’s such a pleasure to do,” he remarked. “I wouldn’t do it if I didn’t love it to death. It’s wonderful just to do it for the music and not to think about the money, or the fame or the fortune, or the image or the clothes, or the record company or the charts.”

Wyman talked about how the Rhythm Kings were preparing for their upcoming European tour by spending three afternoons before the tour rehearsing, and how it differs from preparing for a Stones tour. “When I was in the Stones, we used to go in for four weeks to rehearse songs we’d been playing for 30 years,” he began. “It used to frustrate me to death with the time wasted and the money wasted.”
He elaborated further on why he needed to leave the Stones. “This is enough,” he felt at the time. “I’d done it 30 years. We’d done everything we ever aimed to do and achieve and we’ve had the greatest tours ever. What else is there to do apart from repeating what we’d already done.”

Through the years, Wyman opened a restaurant in London called Sticky Fingers, is busy raising his three daughters, and wrote six books and continues to exhibit his photos. Along with a book on the history of England, a photo book on the artist Marc Chagall, Wyman’s former neighbor in the south of France, and one on the history of the blues, Wyman wrote three books on the Stones. He’s also unofficially the band’s archivist and has amassed a collection of memorabilia that any Stones fan would die for. The members of the group send him tour t-shirts, backstage passes and just about anything Stones related. It’s a unique situation to remain such a die-hard fan of a group he actually left some twenty years ago.

The Rhythm Kings are set to record a new album in the spring. It will be the group’s sixth studio release (they have two live albums). The core of the veritable supergroup is made up of Terry Taylor, British guitar legend Albert Lee and 60’s r&b icon Georgie Fame. Along the way the band also toured with Peter Frampton, Gary Brooker, Paul Carrack and Gary U.S. Bonds. On the band’s upcoming tour, Mary Wilson of The Supremes will join the band.

The group’s albums include guests on some tracks such as Eric Clapton, George Harrison and Mick Taylor. Wyman appeared bittersweet when talking about Taylor. “I always admired Mick’s work over the years,” he stated. “He was fantastic when he joined the Stones. He was a stunning player in those years he was with us.” Wyman then said that when Taylor first played with the Rhythm Kings, he was having problems and that over the years he “blew money on drugs and sold his guitars.” More recently, Taylor played with the Rhythm Kings live and was “doing well.” When I mentioned to Wyman that I thought Taylor to be very underrated during his tenure with the group (and the group recorded its best albums with him), he simply said, “ditto.”

To give real insight into the evolution of the Stones, I asked Wyman to give his take on the three guitar players who marked the distinct periods of the group’s history. “Brian Jones was a genius,” he began, “who could pick up an instrument and find something in that instrument to embellish a particular song at the time. He did that all the way through the 60s with things like ‘Ruby Tuesday’ and ‘2,000 Light Years From Home’ on the Mellotron and the glockenspiel, and he just picked up anything—flutes, harps—that was his genius.” 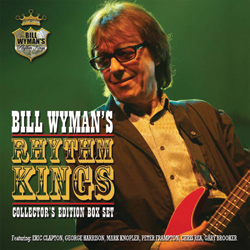 “Mick Taylor came along,” he continued, “and blew us away with his quality and talent, especially on slide; and those albums with Jimmy Miller are my favorite albums—Beggars Banquet, Sticky Fingers, Exile on Main St. and Let It Bleed—they’re my four favorites.”

“Woody’s [Ron Wood] a clown” he remarked. “I love Woody. He became like the link between me and Charlie, the quiet ones, and Mick and Keith, the egotistical ones. He kind of fell into the slot in the middle and kept us buzzing musically with his humor. He always sat well in the band next to Keith since he joined. He works better than anyone else I could think of that might have filled that spot after Mick Taylor left. He was the perfect fit there and he still is.”

Wyman elaborated further on Brian Jones and his love and knowledge for the blues. This got Wyman thinking about how early on in the group’s genesis, he was actually the odd man out for his pure love of black rock ‘n’ roll. It further illustrated why being with the Rhythm Kings is so enjoyable for him. He talked about how he would order records from Chicago and recalled affectionately a list that included Sam Cooke, Chuck Berry, Larry Williams, Lloyd Price, Ray Charles, Little Richard, Eddie Cochran and Jerry Lee Lewis. He then remembered how the other Stones felt about that music. “The Stones hated all that music,” he remarked. “They all learned to like it over the years.”

On December 27th at the Cinema Arts Centre in Huntington, Bill Shelley will present another night of the music of the Rolling Stones, the Mick Taylor years, as part of the Rock Legends Live! series.