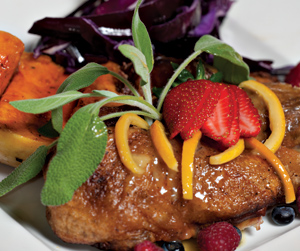 Like Willie Sutton, who said he robbed banks because “That’s where the money is,” knowledgeable foodies find good restaurants by following good chefs. They keep tabs on the movement of outstanding kitchen commanders and go to their restaurants. They correctly figure that if an executive chef who moves hit a home run previously at one or two eating places, he probably will again.

That brings us to Dino Vlacich, an excellent, rising, young chef who deservedly made a name for himself at Mio in Roslyn, went on to do a commendable job at Luce in East Norwich and is also associated with Bin 107 in Saint James.

As a result, his new digs, Ara International Grille and Bar in Saint James is understandably drawing notice from diners in the know. This two-story, white-tablecloth spot with a balcony, soaring ceilings adorned with billowing fabric, candles, giant-sized fir trees and plants galore, is where Intermezzo had been. Cool jazz filled the bar on a recent weeknight at this hushed, civilized eating place.

Every starter and dessert, plus three of the four entrées sampled, were bell ringers. Give strong consideration to the deep bowls of soup that are among the least expensive starters. A rich lobster bisque ($12), with delicate slivers of lobster meat and a touch of sherry and roast corn, and chicken chowder ($8), harboring chunks of chicken and gobs of flavor, are both recommended (though the crispy tortilla chips the menu promised with the chowder never materialized). 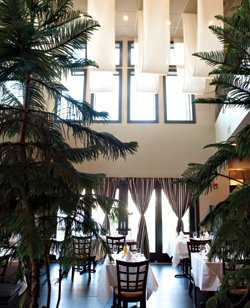 Fruits are used liberally in main dishes to good effect at the Ara International Grille. A fresh and fine gorgonzola salad ($8) is dotted with fresh orange and dried cranberries as well as walnuts and smooth, superior cheese. Fried Peruvian bay scallops ($10) are lightly crusted and come with a cool, tangy Dijon mustard sauce.

Only a pork chop ($23) that was impregnable even with a big heavy steak knife failed at entrée time (it came with a nice apple-cranberry compote, sweet potatoes and green beans). Duck and fruit were made for each other, and the roasted duckling ($26) here arrived in a creative tangle of mixed berries and orange slices as well as red cabbage and butternut squash.

Pastas priced in the uppity $20 to $26 range included a simple, straightforward, perfectly-cooked cavatelli ($20) with a Bolognese style meat sauce. Potato crusted cod ($24), enhanced by caramelized onions and firm green beans, had a pleasant, semi-sweet flavor. Although the wine list here is pricey with no bottle under $30 and a top of $135, wine service was clueless. Our waiter neither showed us the bottle nor offered a preliminary taste. That comic opera service and a very difficult-to-read, dark menu in a dimly-lit dining room were two of the rare flaws encountered.

Desserts ($9) were not among them. They included: An apple strudel with slightly tart apples and vanilla ice cream, a perfect combination; a chocolate mousse cake that was everything it should be; a brittle crusted Linzer torte holding glorious raspberry and whipped cream; and a colossal, circular tiramisu garnished with whipped cream and chocolate.