Restaurants and food fads come and go. When was the last time you ate nouvelle cuisine at a French restaurant? Even Chinese food at a straight Chinese eating-place that doesn’t offer Japanese and/or Thai dishes has become a rarity. Past favorites like chicken à la king and baked Alaska have virtually disappeared from restaurant menus.

Yet, one uniquely American dining institution has persisted. It has weathered all the light-eating, healthy-eating, low-calorie, low-cholesterol warnings and advocacy. Yes, the all-American steakhouse retains its popularity, masculinity and celebratory essence.

Although there are many more Italian restaurants and even newfangled Asian Fusion spots, the steakhouses continue to offer substantial, no surprise, man-sized portions of solid favorites like huge steaks, lamb and pork chops, crab cakes, mashed potatoes, creamed spinach, hashed browns and French fries. They rarely fail and, every once in a while, a new one opens. All of which brings us to Jake’s Steakhouse that opened in July in East Meadow and figures to be around for a while. Owners Margaret Ryan and Tony McGinley have done it right by bringing in a high-powered kitchen duo, Rick Laakkonen, the consulting chef who lists destination restaurants like The River Café, Petrossian and Delmonico’s as well as three-star Michelin restaurants in Europe on his resume, and Executive Chef Chris Hamaty, an experienced Long Island hand who spent the last four years as the very successful Executive Chef of Blackstone Steakhouse in Melville.

The two of them are churning out simple, straightforward, unfussy, understandable dishes. Flamboyant carnivores should target one of the stars on the menu, a humongous hunk of 35-day dry-aged, prime, bone-in rib eye cowboy steak ($44). It, like all the big beef dishes here, is from the most outstanding farms in Schuyler, Nebraska. The tender, slightly smaller, sliced-from-the-bone t-bone steak ($36) is its equal. Nor should the American rack of lamb ($39), with its four good-sized, crunchy herb crusted chops, be overlooked. Less expensive ($24), but also quite satisfying, were soft, deeply-flavored, braised, boneless beef short ribs with scallion mashed potatoes, sweet corn, green beans and roasted cherry tomatoes. 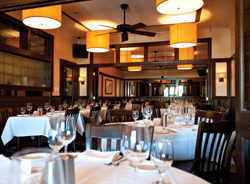 Among the house-made desserts were a standard crème brûlée ($8), a luxuriant, circular blueberry cheesecake ($8), a velvety bar of chocolate mousse ($9) and a modern (and commendable) version of strawberry shortcake ($8), an egg-shaped layered sponge cake, strawberry mousse, chocolate syrup affair with a separate batch of strawberries and whipped cream.