The Hamptons, of course, are known for summer fun. Yet, during the holiday season, they become a winter wonderland. For Santa sightings, winery happenings, concerts and holiday shopping, allow yourself to be transported to an alternate universe where much is still as it has been for generations.

It Takes Villages
Get into the Christmas spirit in Westhampton Beach. The Annual Christmas Tree & Menorah Lighting Ceremony will occur on December 3rd at 5:30pm on The Village Green. Caroling by the Westhampton Beach High School chorus and the Hampton Synagogue’s Youth Choir will fill the evening with festive seasonal sounds. Free hot cocoa and cookies, potato latkes and the arrival of Santa Claus by fire engine tops off the evening.
Traveling east to Southampton, December 3rd is also Southampton’s big day. “It’s a Wonderful Village” festivities go on all day with horse and buggy rides (1:30-3:30pm) and songs by the village choir and carolers. Don’t miss the fire trucks festooned with ornaments in the Annual Parade of Lights (4:45pm) followed by the Christmas Tree Lighting (5:15pm). Afterwards, take the tykes to meet Santa at the Southampton Cultural Center’s Holiday Party.

In Sag Harbor, Santa will arrive on a fire truck at the windmill on the wharf on December 3rd at 2pm. On the 8th, partake in epicurean delights at The American Hotel’s special holiday luncheon with music by Jim Turner (Noon-2pm). $50, reservations required.

In East Hampton (once called the loveliest village in America), there are such quaint goings-on you’ll feel like you stepped into an illustration by Currier & Ives. On weekends throughout December, take part in an old-fashioned Christmas Stroll along Main Street. Meander through this historic town with its jingle of church bells, wandering carolers, costumed guides, and quaint houses decked in boughs of holly and other embellishments of seasonal splendor.

Let members of the town’s historical society lead you on a Lantern Tour of Main Street and historic buildings, lit as they were in days of yore: Clinton Academy, Osborn-Jackson House, the First Presbyterian Church, Mulford House and Home Sweet Home (where the iconic poem was penned). The oldest of these buildings dates back to the late 17th century, when the town was first being settled. “Town Crier” Hugh King is known for his fascinating tales that bring the ancestral inhabitants to life. December 9th, $15, meet at Clinton Academy.

December 10th promises to be the most festive day in East Hampton Village and its sibling to the east, Amagansett. The 21st Annual Holiday Tour will take you through local inns, B&Bs and special places of interest including the Pollock-Krasner House in Springs, where legendary painters Jackson Pollock and his wife Lee Krasner made their art, and Guild Hall, the cultural hub of the area. $20. Check in at Huntting Inn: 11am-Noon, tour: Noon-4pm. Many of the shops are participating and will be serving seasonal refreshments while musicians play, Noon-6pm.

On the evening of December 11th at 4pm, stop by The Living Room restaurant located at c/o The Maidstone Inn for its annual Christmas Tree Lighting. Coffee, hot cocoa, hot cider, grog and cookies from its Scandinavian kitchen will be flowing. Owner Jenny Ljungberg will be on hand to greet guests while Brad Beyer plays holiday songs on the piano and the East Hampton High School Choir leads a singalong. Bring gifts for the Toys for Tots drive. 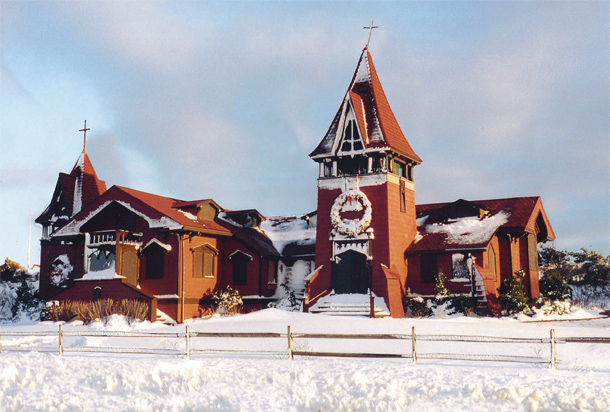 For more religious happenings, Harbor Bells, a community handbell choir, will perform a Christmas concert at Bridgehampton Presbyterian Church on December 10th at 5pm. At St. John’s Episcopal Church in Southampton, the Children’s Pageant will be performed on December 19th at 9am. And, of course, most churches will hold traditional Christmas Eve services. For the most picturesque church around, visit Saint Andrew’s Dune Church set upon the sea-washed dunes of the Atlantic coast in Southampton.

Once Christmas has passed and you’ve had a week to recuperate, you’ll be ready to once again get a dose of Hamptons glitz. The Southampton Inn is offering a special New Year’s Eve Package for couples: Stay overnight for $389 (plus tax and service), attend the inn’s New Year’s Eve party, nurse your pounding heads at breakfast for two at the inn’s restaurant, OSO, and enjoy a late check-out at 2pm. And, throughout winter, Southampton Publick House, a micro brewery/eatery is offering a $50 gift certificate for anyone who books a room at the Southampton Inn for a winter getaway. Make no mistake: a vacation will be sorely needed after all the holiday hoopla.

All Is Bright
The Lighting of the Vines at Wölffer Estate Vineyard, now in its third year, is a dazzling must-see spectacle as 30,000 sparkling lights are set aglow on the multiple acres of vines. December 3rd, 4-6:30pm, $25, reservations recommended.

Hark! The Hamptons Angels Sing
The holiday season is not just about sight, but also very much about sound…and Christmas wouldn’t be complete without listening to a performance of Handel’s Messiah. First performed in Dublin in 1742, it has become one of the best-known choral works in Western music. The Choral Society of the Hamptons, a choir of dozens of voices founded in 1946, will perform the opus at Bridgehampton Presbyterian Church on December 4th at 3 and 5:30pm.

North Fork
For wine lovers, the North Fork boasts more than 50 wineries, almost all of which stay open weekends throughout December until 5 or 6pm or later to offer wine tastings, gifts of wine and even parties (if you’re lucky).
Vine Time is an inclusive wine getaway featuring a two-night stay in one of several charming B&Bs (Acorn Hollow, Homeport, The Morning Glory and The Stirling House) that includes a gourmet breakfast, two dinners for two at a choice of top local restaurants including Noah’s, North Fork Table, Jamesport Manor Inn, The Frisky Oyster, Vine Wine Bar and First Street Restaurant, Love Lane Kitchen and Vine Street Café. But the capstone is the all-day wine country tour where you’ll meet the winemakers who will share their knowledge on a vineyard walk or barrel tasting. Participating wineries may include Water’s Crest, Laurel Lake Winery, Shinn Vineyard, Peconic Bay Winery and Sparkling Pointe, among others. $499 per person. December 9th-11th. Longislandvinetime.com.

If you’re venturing out on your own, you’ll find most wineries ready to receive in festive finery. Head to the farthest eastern winery, The Old Field Vineyards, a boutique winery whose vines grow down to the bay. Their wine sale specials and Christmas baskets contain a variety of wines, from Merlot and Cabernet Franc to their acclaimed steel-fermented Chardonnay and highly rated sparkling blanc de noir.

Bedell Cellars, one of the larger wineries, is offering an Artist Series Gift Box: A one-of-a-kind package of wine and an artwork from a notable artist, all contained in a custom wooden box. $280.

If you want to drive no further than Riverhead, a new store opened in Tanger Outlets this November that carries only New York State wines from Long Island, the Hudson Valley and the Finger Lakes.

If you become so charmed by the North Fork (who wouldn’t?), you may actually want to spend Christmas on the tine of land reaching out into the seas. The Harborfront Inn at Greenport is offering a Christmas package for a family of four: stay the 24th to the 26th in a deluxe room in this “first luxury hotel on Long Island’s uncommercialized North Fork.”

My True Love Bought For Me

From holiday wreathes and candles to sexy sequined attire and fine baubles, the Hamptons offer an embarrassment of shopping riches. Part of the summer fun is idling the villages’ sidewalks to shop the array of boutiques. And the fun carries through into the frostier months. Along the way, check out these “off main street” venues for something unique.

Open Minded Shopping Club is a private club for women’s apparel located in downtown Southampton, which will open its doors to the public in December for the holidays. For the first time, non-members will be able to take advantage of the in-house personal stylist who will guide shoppers through a glitzy array of celebrity-worthy holiday wear from sequined tops to velvet skirts, festive scarves and an eclectic mix of fashion jewelry. Call (631) 287-1078 for an appointment.

Across the street is Gretchen Scott, a shop known for its summery tunics that everyone was wearing at the beach club this year. Few are aware that the store also has a mean selection of fall tunics woven from pashmina in wintry colors. And so few knew about the store’s line of “washable suede” jackets, pants and skirts that the already reasonable prices are half-off through December.

Hildreth’s Home Goods is the Hampton’s landmark home furnishing store, established all the way back in 1842. Besides fabulous housewares for holiday entertaining, this is the place to stock up on luxurious bedding and cozy throws.

Townline BBQ, owned by Toni Ross of the celebrity-infested Nick & Toni’s restaurant, is selling their acclaimed BBQ sauce: a great stocking stuffer or holiday hostess gift.
m a d e is a unique shop in East Hampton offering “useful and beautiful” items made by global artisans, many of whose work is not available in stores or galleries. Why not end your shopping spree with a trip to Calypso St. Barth to load up on cashmere pullovers, or better yet, island-y caftans. Now that you’ve covered all the wintry wonders, isn’t it time to prepare for heading to warmer climates?

Shoppers’ Detour
Eastport is considered the Gateway to the Hamptons and is home to many fine retailers, interesting antique shops and quality jewelers.