A river cruise through Myanmar’s countryside reveals breathtaking Buddhist temples and other signs of a well-preserved culture.

My first visit to Myanmar was a freestyle kayaking drift with the nomadic sea gypsies inhabiting the Mergui Archipelago. I returned a decade later to board a very different boat…

The Road to Mandalay—Orient-Express’ floating Rolls-Royce on Myanmar’s Ayeyarwady River—is the sort of cruise your parents might take, I thought, then realized that I’m old enough to fit that bill. For an evolving backpacker like me, hot showers and gourmet food make an agreeable introduction to one of the most beautiful and historic countries on earth. The dazzling pagodas and serene monks of ancient Myanmar can be viewed from the serenity of this ship as it cruises the country’s most important river, plying the waters between Mandalay and Bagan. Myanmar borders India, whose proximity is obvious in the spicy food. China’s proximity is obvious, too, in the many serious businessmen counting things.

While Myanmar’s political situation isn’t exactly ideal (one noticeable symptom of government limitations is the tangled bureaucracy and relatively exorbitant cost of obtaining a visa). All of this is a superficial inconvenience though, the bottom line is travelers carry democratic ideas in with them. In this amazing Buddhist country, gracious people and breathtaking pagodas are as ubiquitous as our suburban telephone poles. Formerly called Burma, the Union of Myanmar is a poor country emerging from 40 years of self-imposed isolation, which means today’s visitors are treated to a glimpse of the Asia of four decades ago. 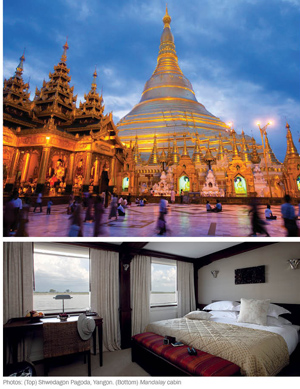 Before flying to meet the riverboat in Mandalay, I discovered that Yangon, Myanmar’s former capital city, is a swell place for tea time. On nearly every street, people—often dozens of them—sit in establishments or on sidewalks atop 10-inch stools and huddle over mini tables supporting a teapot. Like urban sidewalk congregations around the world, this is the heart of conversation and people-watching. And you can do it in the shade—Myanmar towns and cities remembered to save their trees. One tongue-in-cheek venue, the 7-11 Tea Centre, is where I met a rusty expatriate who (paraphrasing actor George Raft) told me, “Part of my cash I spent on gambling, part on booze and part on women. The rest I spent foolishly.” (It’s doubtful he spoke of experiences in Myanmar, which is socially conservative compared to neighbors Laos and Thailand.) Many locals over age 50 speak English, a leftover of the British rule that lasted until 1947. With locals, expats and travelers mingling, the full gamut of conversation is available. Likewise with transportation options: Chauffeured old bike with sidecar (aka, trishaw), motorbike, pickup truck, bus, taxi or your feet.

The city’s centerpiece is Shwedagon Pagoda, the country’s most sacred site. A radiant hilltop campus of Buddhist shrines surrounds a 300-foot-tall golden dome (stupa or zedi), which can be seen from virtually anywhere in town. Housed within the Shwedagon are eight sacred locks of Buddha’s hair. Legend dates the site back 2,500 years; archaeologists suggest it was built between the sixth and 10th centuries. Most people visit this popular pagoda during sunrise and sunset by using one of four grand staircase entrances.

The Road to Mandalay cruised south from Yangon on the 1,300-mile Ayeyarwady River (nicknamed “The Road” by Rudyard Kipling), which bisects Myanmar. Floating along the historic spine of this dreamscape provides endless glimpses of river life in this timeless land: Logging boats, fishing canoes, ancient steamers, battered tugs, gondoliers, and, on shore, people bathing and washing clothes outside small teak and thatched-bamboo dwellings, cattle grazing, men pulling rickshaws, kids singing and waving and wondering what life must be like on Mars (aka, our ship).

This deluxe, circa-1964, German-built riverboat (333 feet long, 38 feet wide) has a teak deck with a swimming pool in the center. Breakfast, lunch buffets and dinner are prepped by internationally-sought chefs on this former Rhine cruiser that definitely isn’t serving knockwurst anymore. Daily shore excursions visit all of the vital historic sites set in simple, remote places still largely untouched by modernity. During one visit, I detoured to a nearby café whose name translated simply into “Eating Restaurant.” Thankfully, visits to gift shops are limited.

Surely it would be difficult to find “cappuccino of wild mushroom truffle oil” elsewhere in Myanmar, but the Road to Mandalay chefs deliver passengers from the otherwise obligatory “snacked-with-the-locals” dysentery, so I was all too happy to find the less-than-exotic chive-whipped potatoes in red wine sauce on the ship’s menu. The staff is well trained in five-star hospitality, but they’re also genuine Burmese, who need no training in grace. High-end Southeast Asian service is so complete, it actually takes a bit of getting used to. Entertainment includes a pianist in the main bar, cultural shows (dance, folklore, crafts, puppets), local entertainers, lectures by guides and a longyi (sarong) party. It’s definitely not a singles’ cruise, but going it alone is no problem and the staff of 70 keeps things interesting, including the two lifetime river pilots, who deftly weave the boat through rocks and channels.

On land, Buddha is everywhere. The core philosophy of this 2,500-year-old way of life pretty much eluded me until the boat’s tour guide put it like this: “To love someone is to suffer; to hate someone is to suffer.”
Bagan hugs the Ayeyarwady River and is home to more than 3,000 religious monuments. (This number was 5,000 until a 1975 earthquake.) These magnificent temples made of long, domino-like red bricks—built between 1044 and 1287—are as plentiful as cacti in some deserts. The flat, dry landscape means low brush and high visibility to every horizon revealing a plateau of brick palaces that is an orgy of temples and pagodas of every dimension. One of a kind? Yes. Some of the architects of the most impressive temples were killed by the kings who commissioned them so similar structures could not be constructed elsewhere.

Despite the controversial, ongoing reconstruction of earthquake-damaged temples (most believers were happy with them as authentic ruins) and new restrictions on entering others, you can still experience a few; just be sure to wear long pants and remove your shoes first. Plan your arrival for later in the day and be doubly rewarded. The remarkable view from atop one of these World Heritage Sites is enhanced during a peaceful sunset. Ananda Temple, from the early Bagan period (1105), houses four 31-foot tall standing Buddhas, each facing a different compass direction and wearing the typical Burmese Buddha expression: When standing close to a statue, it appears that Buddha has a small, beakish mouth; yet from afar, the same lips reveal a big smile.

At first, I was wary about floating on an opulent boat through a poor country, but it turns out that people of means can be just as interesting as backpackers—particularly those traveling to a distant land. My day-one observations—mostly ridicule, especially concerning the men sporting the “Dick Cheney on vacation” look and their wide-brimmed-hat-wearing wives—changed by day two. These accomplished, caring people each told me their best tale. And at least they could laugh at themselves. During the sarong demonstrations, when all the passengers were swathed in traditional garb and the men were posing for the obligatory photo session, one woman pointed to an older, bald man and shrieked, “You look like Gandhi!”

The Road to Mandalay runs seasonally from July to April. Itineraries vary; the ship can accommodate 82 passengers. The monsoonal differentiation of this wide river with mostly flat banks means that getting stuck on a sandbar is a concern in low water (dry season is March through early May), but a Zodiac often scouts sandbars in advance of the ship.

An Orient-Express journey is soup-to-nuts, so you’re on autopilot from the time you see your name on a sign at the airport. From Bangkok, four internal flights are required. Similar to skiing, a few hurdles are necessary before you finally say “ahhhh.” (800) 524-2420, orient-express.com.