From the bumps to the backcountry, the terrain park to the trees, these mountains are the best places to learn how to take your skiing and riding to the next level.

Ski and ride lingo these days talk about “the progression”—advancing from smaller to bigger features on the mountain, building technique and experience, and in the case of the park and pipe, gradually learning to hit bigger airs and throw more complicated tricks. Glades, moguls, the terrain park, you name it—make all of them part of your well-rounded arsenal, focus on your favorite, or improve your “weakest link.” These mountains are the best places to hone your skills.

Smuggs is an all-around mountain that offers something for everyone. Experts will gravitate toward a series of runs known as the Fab Five, which includes The Black Hole, a heart-pounding gladed run that Travel+Leisure included in its list of “World’s Scariest Ski Slopes” and the only triple black diamond run in the East. But Smuggs really shines with its children’s programming. Self-titled as “America’s Family Resort,” Smuggs backs up the boast—readers of SKI Magazine have named it #1 in North America for family programs an incredible 13 times.

You’ll find most of the kid-friendly beginner terrain on Morse Mountain and Morse Highlands. Chairlifts such as the Mogul Mouse’s Magic Lift are designed specifically with kids in mind, with lower chair heights and slower speeds. Kids enrolled in formal programs wear colored vests so instructors and students can keep track of who’s with what group. And Smuggs utilizes the Flaik GPS system, enabling the tracking of each child—great not only for mountain safety, but also for downloading and viewing on a computer at the end of a ski day.

New for this season is the Burton Riglet Park. Designed in cooperation with Vermont’s Burton Snowboards, it’s a terrain park for the most pint-sized boarders and skiers. And as ever, Smuggs’ renowned staff are there to guide your children through it all. “We focus on hiring people who are good teachers with kids,” says president Bob Mulcahy. “They don’t necessarily have to be expert skiers. That’s not what’s critical. We care about how they relate with the kids, that they love being with them and entertaining them. Our approach is for the children to find it really fun to learn.”

That approach is working. Between on-mountain programs and off-mountain activities (including weekly magic shows, science programs, ski school instructors doing skits in character and a fun zone with inflatables) there’s no lack of activity for the little ones. “If they want to be busy until eight or nine at night, they can,” says Mulcahy. “But the younger ones usually conk out by then. Those kids get a good night’s sleep every night at Smuggs.” 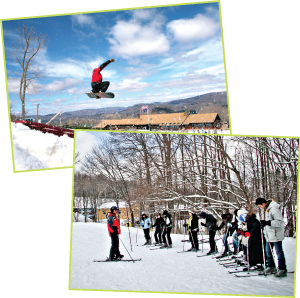 Located in New York’s Catskill Forest Preserve and operated by the state’s Department of Environmental Conservation, Belleayre laid claim to New York’s first chairlift when it opened in 1949. Think what you will of New York State politics… This is essentially state-subsidized skiing, with weekend and holiday full day lift tickets running just $54 (compared to, say, $68 at nearby Hunter Mountain). Belleayre is in part known for the Beast, an open-air snowcat that shuttles skiers and riders along the mountain’s ridgetop, making it easier to access your chosen run from the top of the lifts, especially the challenging Cathedral Brook trail.

Over the years, though, Belleayre has really built its reputation as a beginner-friendly mountain known for its adult-oriented learn-to-ski programs. The lower mountain features almost exclusively novice terrain. Once you’re ready to graduate to bigger and more challenging slopes, the upper mountain is basically divided in two: one half intermediate runs, one half expert runs. Though you can opt for formal ski lessons, Belleayre also features a special teaching area of the mountain. For just $15 on top of your lift ticket, you get continual access to instructors who can answers questions and offer technique tips when you need them. It’s a more casual approach to the traditional, formal ski school.

This season, Belleayre also unveiled a pair of new women’s only ski school programs, including one for first timers. Consider it one more reason why skier/snowboarder visits have nearly tripled here in the last decade and a half.

It’s a fact of life that 99% of resorts these days have snowmaking on some, if not most, of their trails. It’s a way to extend the ski season with deeper snowpack and to give better coverage to trails that otherwise might be thin and bony. But skiing the white stuff that comes from snowmaking systems—no matter how modern or high tech—just isn’t the same as what Mother Nature and Old Man Winter give us. The “real” thing skis—and feels—different. Learn that lesson for yourself by heading to Vermont’s Mad River Glen, where the slogan is “Ski It If You Can.”

This cooperative—comprising skier-shareholders—is home to the only remaining single chair in the country. Set across the slopes of General Stark Mountain, all the trails funnel back to a single base area. And here’s the clincher: MRG has just 15% snowmaking coverage, exclusive to the low elevation, high traffic areas around the base. Up on the mountain, it’s 100% au naturel, to the tune of 250 inches of average annual snowfall.

There’s just one catch, and it’s potentially a big one: You need two sticks on your feet to sample MRG’s authentic powder. MRG is one of the only mountains in the country that’s skier-only. Snowboarders are out of luck here. If you’re a boarder, or a mixed skier-boarder group, head just down the road—Vermont Route 100—to Sugarbush, and sample the natural snow in Slide Brook Basin, off the backside of North Lynx Peak.

Just north of the Vermont border, you’ll find Quebec’s Eastern Townships. With the French-speaking populace, it can feel surprisingly “international” for how close it is to major Northeast locales, such as New York. Thankfully, the same friendly relations that govern the U.S.-Canadian border also seem to extend to weather systems. When northern Vermont ski areas such as Jay Peak are getting dumped on, often so are the mountains of the Eastern Townships. And if you’re into skiing the trees, Quebec’s Mont Sutton is the place to go. Its glades have been compared to British Columbia’s Big White ski resort, no small compliment.

A full 45% of the mountain is dedicated to glade skiing and riding. Most ski areas thin the trees to open up their glades. Sutton does that, too. But the mountain also plants trees, up to 1,000 per year, to give its various glades different character, from easy to expert. That means you can progress from easy, open glades to the steep, tight stuff (if you so choose). Four new glades are open for this winter season.

Best of all, Mont Sutton doesn’t just send you into the trees and wait for the glades to chew you up and spit you out at the bottom. The resort offers glade-only lessons to help you hone your technique in the mountain’s birch, hemlock and maple forests. It makes for an experience that prompted a writer for the Toronto Star to declare Sutton “exceptional for its glades,” and a place “where skiing meets nature.” 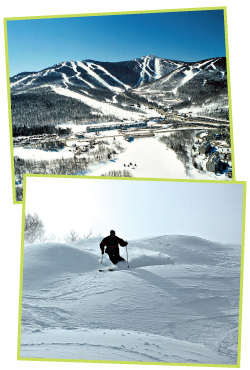 Moguls. Some people love ‘em; others hate ‘em and avoid them at all costs. But here’s the plain truth: at some point, you’re going to have to brave the bumps (if only to make it down the mountain and into the bar for a bit of après-ski). The massive resort of Killington—which culminates in Killington Peak, Vermont’s second tallest mountain—does the bumps better than most. The resort purposefully leaves many trails ungroomed for the mogul junkies out there. That includes Outer Limits, the steepest, longest mogul run in the East (which, depending on your perspective, may either sound awesome or like the worst thing in the world).

Killington’s ski school uniquely features an Adult Moguls Program, and the Killington Mountain School has a freestyle moguls team. In other words, the resort knows how to teach moguls right. Which is why the mountain has given birth to the likes of Michael Morse, former national mogul champion and US Olympian from the Vancouver Winter Games. While some say Killington’s moguls aren’t what they used to be, it’s hard to argue with a testament like that. 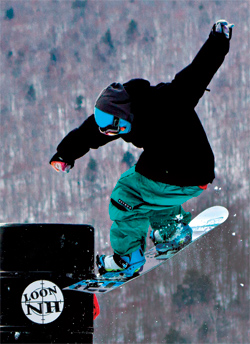 It’s undeniable: the influence of Shaun White and other X Games-type athletes have changed the face of skiing and riding. Terrain parks and half pipes have become an integral part of the mountain experience, especially for younger generations. And if the park and pipe are your thing (or you think they might be your thing), head to New Hampshire’s Loon Mountain, along the Kancamagus Highway in the heart of the White Mountains. With seven terrain parks on the mountain, it offers no shortage of places to “play” for freestyle skiers and snowboarders.

The newest is the Missing Link, a natural terrain park with wooden features. There’s the Burton Progression Park. And, of course, there’s the signature Loon Mountain Park, complete with a 32-foot-tall wall ride and a superpipe with 18-foot walls. Variety is the name of the game here. You can go as big (or as small) as you desire. “Our biggest goal has been to make features that people of different levels of ability can hit and still have a good time,” says Jay Scambio, terrain park development manager at Loon. “Beginners, intermediates, experts can all ride and have a good time. We’re not just about having the biggest, tallest, fastest. We’re user-friendly for everybody.”

Not sure you’re ready to catch air or throw a trick on your own? Loon won’t just pair you with the next ski instructor in the day’s rotation. Request a park-and-pipe-specific lesson, and the resort will pair you with an instructor who specializes in terrain park skiing and riding. It’s no wonder Loon Mountain usually ranks as having the top terrain park in the East in any given season, and why Transworld Snowboarding and Snowboard Magazine have rated it one of the best in North America. 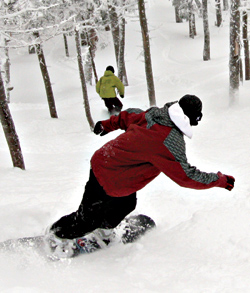 As the second highest peak in Maine, Sugarloaf is big mountain country: the summit snowfields; King Pine Bowl; 360-degree views of Maine, New Hampshire, Vermont and Quebec from the top; and the only above-treeline, lift-served skiing east of the Rockies. But the big deal here this season is Brackett Basin, the recently opened expansion terrain as part of Sugarloaf’s 2020 plan. When complete, the expansion will fully double the size of the resort’s skiable terrain.

Last season, Sugarloaf opened 270 acres of Brackett Basin—backcountry-style glades, complete with steeps, chutes and cliffs. This season, another 100 acres have come online, offering 2,300 vertical feet of sidecountry and further expanding the resort toward adjacent Burnt Mountain. What exactly is sidecountry terrain? It’s like true backcountry wilderness mountain skiing, with one major exception: ski patrol will come find you if you get into trouble. That’s an important safety net, making Sugarloaf the best place to dabble in backcountry skiing and riding.

“Brackett Basin offers all of the adventure and challenge of a backcountry experience. But,” says communications manager Ethan Austin, “with the safety and security of inbounds, resort skiing. There’s really nowhere else on the East Coast with that kind of off-piste/on-piste hybrid experience.”