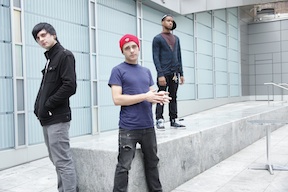 Super Prime, who formed at Berklee College of Music, hit the Boston music scene in the spring of 2011, and the trio has already shared the bill with Marky Ramone, “the great-grandfather of the kind of rock [they] play.” Growing up, they were all in rock bands but their influences were as diverse as hip-hop, jazz, gospel, and electronica. So, what inspired the music on their latest EP, “Sun’s Out, Gun’s Out?”

“We we’re listening to a lot of Title Fight, Fall Out Boy, Such Gold and Blink in the van on the way to practice,” notes Bond. “We also watched a ton of YouTube videos and played way too many video games… Our lyrics are always inspired by real life experiences and feelings we think we need to get out in the open.”

The power trio–vocalist/bassist Austin Bond, guitarist/vocalist Adam Newall and drummer Marcus James– who were also influenced by Incubus and Drake, describe their music as “fast, melodic, fun and easy to dance to.”

“We like making people happy,” reveals Bond, “and we play for everyone, not just specific group of people. It’s becoming more pop rock than pop punk these days but thats okay.”

When the band returns to NYC’s Studio at Webster Hall on Sunday, January 15th, they will be sharing the bill with Long Island’s Patent Pending, and you’ll hear music from their first 2 EP’s, and “some really cool covers, like Fall Out Boy’s ‘Grand Theft Autumn,’ Lit’s ‘My Own Worst Enemy,’ and a few Blink-182 songs.” Look for Super Prime’s debut full-length, produced by Brian Charles (Bright Eyes) to drop in the springtime.

For more info check out: www.super-prime.com