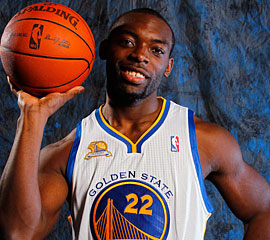 From the blue and gold colors to the No. 22 jersey, Charles Jenkins looks at home playing with Golden State.

The 6-foot-3 guard, who was selected in the second round (44th overall) in last year’s NBA Draft, has played in seven games so far, including a 97-90 loss against California rival Los Angeles on Friday night. The Warriors, feeling their way under new leadership with a young roster, are 2-5 to start the 2011-12 season.

Jenkins has scored 14 points in seven games and is averaging 8 minutes per game.