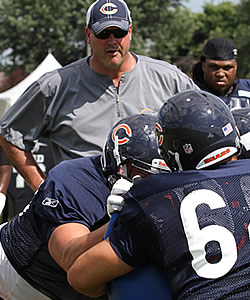 Mike Tice’s NFL resume continues to grow. The Central Islip, N.Y. native was named the new offensive coordinator with the Chicago Bears Friday afternoon. Tice, who was with the organization as an offensive line coach, replaces former coordinator Mike Martz, who parted ways with the franchise.

“I’m excited to have Mike move into our offensive coordinator role,” Bears coach Lovie Smith said on ChicagoBears.com. “He has been a valuable member of our staff over the past two years and has an excellent track record in the NFL. He was very impressive in his job interview yesterday and shares the same vision I have for our offense moving forward. We want to be a strong running team with a big-play pass attack.

“Mike will call plays for us and continue to have an active role with our offensive line. To complete our staff we will be hiring a passing coordinator who will work with our quarterbacks and an offensive line coach.”
Tice has been around the NFL for 30 years. He played 14 seasons and has coached for the last 16, including a stint as the head coach of the Minnesota Vikings from 2001-2005.

“Lovie and I share a similar mindset of what the Bears offense should look and feel like,” Tice said in an interview with ChicagoBears.com. “There will be a toughness about us. We are going to be a powerful run team and we’re going to be able to mix in explosive pass plays.

“It will be important for us to utilize the talents of our players and exploit match-ups each Sunday. We have athletes we can build with. I feel fortunate Lovie has placed the trust in me to help move us forward to a championship.”