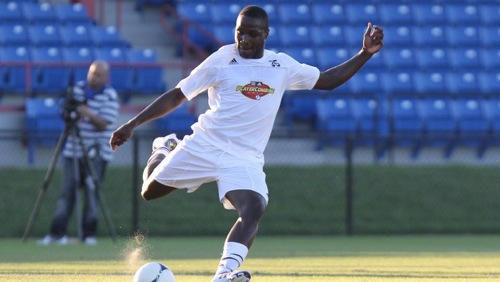 Brentwood native Andrew Jean-Baptiste, 19, was selected in the first round of the MLS Draft by the Portland Timbers on Thursday.

“I couldn’t fall asleep until 3 or 4 in the morning because I was so anxious,” Jean-Baptiste said about the night before the draft. “With me as an addition to the team there is going to be a lot of beautiful football playing in that stadium.”

He played two seasons at Connecticut, leading the Huskies to the Big East finals and the semifinals in the 2011 NCAA tournament.

Jean-Baptiste was named the Big East Conference Defensive Player of the Year, received Soccer America second-team MVP honors and earned a spot on the NSCAA All-Northeast Region first team. He was a member of the U.S. U-20 National Team player pool in 2010.

At Brentwood he was Newsday’s Player of the Year in 2009.

“We had identified the players we were after,” said Timbers General Manager Gavin Wilkinson, on the Timbers’ website. “With our No. 8 pick, we definitely wanted to add a quality piece, and I think we got that with Andrew. He was a player that we identified and a player that we wanted. It was good that he fell to the No. 8 spot and we were able to acquire him.”

To see video of Jean-Baptiste talk about his new team, click here.