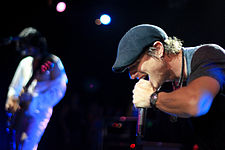 We’re here and now, but will we ever be again?
‘Cause I have found
All that shimmers in this world is sure to fade
Away again…

It’s been awhile since the alt-rock post-grunge band Fuel has been on the scene, but original lead singer Brett Scallions recruited guitarist Andy Andersson, bassist Brad Stewart, and drummer Kenneth Schalk, and the new foursome began touring together last week. You might recall late nineties hits like “Shimmer” and “Hemorrhage (In My Hands),” but Scallions is also writing some new music and the band expects to release a new record sometime this year–the rumor being summertime.

When Fuel hit the Paramount in Huntington on Friday night they’ll be playing with a number of bands: the opener will be the Soundgarden-esque Edisun, followed by Huntington’s own Verse the Empire, and L.A.’s Venrez. “Fuelies” can expect to hear the classics, and possibly some new songs like “I Can See the Sun,” and “What We Can Never Have.” Music starts at 8pm: http://www.paramountny.com/shows/

For more info check out: http://fuelrocks.com/