Once in a while, if we’re incredibly lucky, we meet our heroes.

Once in awhile, if we’re incredibly unlucky, we get struck by lightning.

On a stormy August day in the Berkshire Mountains of 1976, Long Island bluegrass legend Buddy Merriam did both.

“When Bill Monroe hit the stage, I never heard anything as powerful in my life,” said Merriam, recalling the day he met the great-grandfather of this most American of American musical genres.

“I found myself outside [Monroe’s] bus,” Merriam continued. “I ran into him pretty much by accident. I told him how much his playing meant to me. He saw I had a mandolin strapped on my shoulder and he gave me some advice.”

That was all Merriam needed to hear.

“That’s the entire bluegrass tradition right there,” said Merriam, “It’s what I tell all my students.”

As that summer day unfolded in true “Crossroads” fashion, it’s easy to see that Buddy Merriam did not choose bluegrass—bluegrass chose him.

“I was right at the front of the stage [at the Berkshires festival],” said Merriam. “Later on that evening, this wicked storm blew in. Rain was teeming down. Everyone was heading for cover. But we just hung in there. The music was so powerful.

“The band kept playing. Lightning started touching down. The band finally shut it down. I turned to leave and BAM! Lightning hit me right in the neck.”
Merriam survived, though he suffered severe hearing loss. After a long road of physical rehabilitation, he gradually got his dexterity and his ears back, all en route to mastering the music he quickly came to love, creating his long evolving collective Back Roads and becoming the primary benefactor of bluegrass music on Long Island and in the Northeast.

As a bandleader, songwriter, elite mandolin player and radio host, what Merriam has really been doing for more than 30 years is—note by note—carving his own bust into the Mt. Rushmore of bluegrass greats, next to his idols Monroe and the underrated banjo great, Jerry Garcia.

“I was a big Deadhead!” Merriam exclaimed. “That was my original way into all of this stuff.”

Greg Butler can say the same. The 32-year-old mandolin/guitar player from East Quogue has started chiseling away at that fourth spot on the mountaintop by falling right under Merriam’s wing; first as a student, then as a collaborator.

“Finding out that Jerry played the banjo in Old and in the Way, I started to feel how all of this music is connected,” said Butler as he traced his own “Deadgrass” roots. “‘Dark Star’ was something I remember playing along to, figuring out Jerry’s modal visions.”

In the lessons that Merriam shared with Butler, both could sense a legitimate musical bond. After Butler went his own way for a while in a series of musical and personal explorations of various shades, he eventually circled back to play with Merriam in a more serious way. 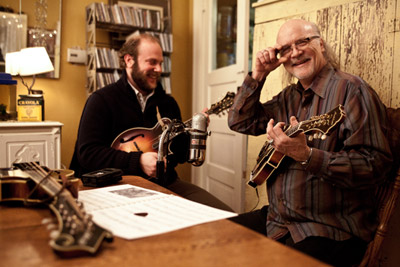 “It seems every time I pick up the mandolin, I learn something new,” explained Butler with his signature joie de vivre. “I can sit for hours at a time and let practicing turn into full enjoyment. I think inspiration is a huge factor in becoming a player. Buddy has inspired me through his kind words and powerful music. He really writes great melodies.”

As the scene’s young gun, Butler is keenly aware that his unique place as a champion of “newgrass” is about more than the playing. “Making every note count,” as Monroe and Merriam preached before him, is not only a musical tenet—it’s a way of life.

“I try to view the world as having a common thread, being human and not taking life for granted. I think I try to make every second count in the world. Also, improvisation is a big part of the music and I think that it helps me react to real life situations.”

As Butler swings, shuffles and shitkicks his way into the musical future, he carries an homage to the past down every road he travels.

“I’m honored and excited to be considered part of this tradition,” said Butler. “I respect the players of the past and learned from them as best as I could. I hope my future is full of mandolin music as well as love. I can only say for sure that it will have tons of melodies, down picks, chromatics, cross picking, triplets, double stops, long tones, arpeggios, slides, octaves, original music and harmonies.”

As for Merriam, that he’s even alive and playing at all is the miracle that sustains him daily. His two-step with fate left him with some scars, but it also made his path crystal clear.

“I have trouble tuning and I can’t really sing,” laughed Merriam. “But I’m doing exactly what I want to do with my life.”

Buddy Merriam gigs with his trio the 2nd Wednesday of every month at Three Village Inn’s Mirabelle Tavern in Stony Brook from 8-10pm. The next two shows will be on February 8 and March 14. He also hosts the weekly Blue Grass Time radio show Wednesday nights on WUSB 90.1 FM in Stony Brook. Greg Butler can be heard sitting in with Buddy, in his duo with Jesse Pagano at Patchogue’s The Tap Room or with his original “Newgrass” outfit, Free Grass Union.