“It’s a straight road. Just drive on the left, go straight and don’t hit anyone.” So advises Mr. T, the gray-haired, mustachioed owner of an eponymous car rental agency who’s decked out in a shocking pink t-shirt, worn jeans and gold chains. His suggestion comes in response to our question about collision insurance. Clearly, there isn’t any. Credit cards? Nope. “Cash only. $65 a day. You see that guy?” Mr. T asks. We’re not sure who he’s pointing out. (Surely, not the pilot who’s alighting from the Pineapple Air jet that just landed at Deadman’s Cay airport.) Then we gaze across the parking lot, past the palm trees and see another car rental agent. “He’s $75. I’m $65,” says Mr. T, assuring us that we are making the right choice. With such an informal car rental transaction, my overly cautious boyfriend, Ted, is about to balk when I nudge him to cough up the cash. We have no choice, we need wheels to navigate around postage stamp-sized Long Island, one of the Bahamas Out Islands.

Over the next four days, Mr. T’s words echo in my head as I become concerned not so much with who we might hit on the road—traffic is non-existent—but what. Roosters and goats are some of the most common travelers on Long Island’s lone main road, the Queens Highway. Coursing from the north to the south end, it passes through several dozen wee settlements bearing names that reflect the original Loyalist settlers (such as Dunmore and Dean), regional plant life (Cabbage Point and Mangrove Bush) or previous activities (Burnt Ground and The Crossing).

Checking into the sprawling Stella Maris Resort Club and Marina, one of only two low-rise island resorts, sets off our security antennae again: Keys don’t come with the room. “There’s an open door policy on the property. No one locks their doors,” says the receptionist, who seems surprised that we’re concerned.

Visiting Long Island is like stepping through a time portal into the Caribbean of 30 years ago, where the pace is languid, the residents are easygoing, the coconut palms are among the tallest features and the pleasures are simple. (Movie theaters, shopping malls and water parks haven’t yet made an appearance here.) Just one hour away, tourist-crammed Nassau, with its celebrity spotting and glitzy resorts, seems very much like an alien world.

The 80-mile-long island—that measures just under four miles wide at its widest point—is aptly named. But the land’s first people, the Lucayan Indians, knew it as Yuma. Remnants of this civilization dating to the 6th century remain. Among the artifacts crammed into the Long Island Museum, a pink-painted edifice, is a Lucayan canoe found on a nearby beach and three carved wooden duhos (ceremonial stools) that were discovered in one of the island’s many caves. The island’s signature site, Hamilton Cave, is one of the largest cave systems in the Bahamas, with guided walks down one portion, a 900-foot-long length, where fruit bats may flit about. Local resident Leonard Cartwright shows me samples of the Lucayan pottery shards he found here, as the cave is set on his property.

At Hillside Groceries in Salt Pond, owner Edna Fox hangs up her apron, abandons the cash register, and escorts us to a lesser-known cave across the street, though I see no evidence of it at first. “You see that tree that’s taller than the others?” she’s pointing at a soaring specimen. “It’s growing in the cave.” Walking beside an auto repair lot adjacent to a pocket of land coated with dense brush, we step through a window in the foliage. This path winds down a steep slope that ends at a wide gash in the limestone hillside, one that requires a flashlight to navigate its length. “The locals use the caves to hide in during the hurricanes,” says Edna. 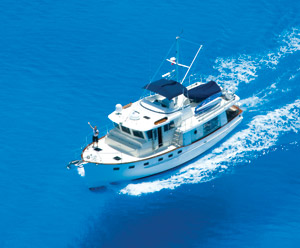 Along the island’s northern tip, a 15-foot-high obelisk, Columbus Monument, commemorates the explorer’s trade activities with the Lucayans. This site can only be reached by driving 10 minutes down a bone-rattling road that terminates at a steep, but short, footpath. Before heading up the path, a tiny strip of sand near the parking area makes for a good snorkel-launching spot where you may spy seahorses. The monument itself is perched atop the island’s highest point, providing panoramic views of the azure Atlantic as well as the translucent waters along mangrove-lined Columbus Harbour. This shallow, protected cove—a premier venue for snorkeling on the island—is where Columbus may have first made landfall. It now attracts novice kayakers who paddle the placid waters to numerous inner sandy stretches, as well as experts who tackle the swift currents to cross into the open Atlantic and circle to the Cape Santa Maria Beach Resort, the island’s second resort (named for Columbus’ flagship), where three-some-miles of white sand await.

Long Island’s treasures give themselves up slowly and subtly, with some requiring a bit of poking around. A local’s directions to one powdery beach seem particularly curious: “Park at the old Millerton School, go past the church, walk through the opening in the brush and keep going.” I’m not optimistic that the thicket before us will lead to a gem. But, after a five minute stroll on a well-worn, leaf-strewn path, the calm, turquoise Caribbean fringed by a powdery sand beach comes into view. We have the place to ourselves.

Another day, we follow a map, which is pockmarked with a myriad of mostly deserted beaches, each displaying a distinct personality. Deals Beach, just off the Queens Highway, with its low-key restaurant serving up straight-from-the-boat seafood, complimentary kayak and Hobie Cat use and two miles of palm- and Australian pine-dappled sands, makes for an ideal afternoon base where we encounter just two other strollers. Another desolate stretch, at the end of a narrow bumpy road, frames a protected bay that’s flanked by tall grasses. From here, it’s possible to kayak 500 yards offshore to tiny Guana Cay, a coconut palm-tufted mound that’s home to unusual curly-tailed iguanas. From there, we follow a sign for the now defunct Compass Rose Guesthouse to discover Lowe’s Beach and, after a short stroll, a low coral wall that encloses an oval pool of tranquil waters and a vista of crashing waves beyond.

It’s impossible to maintain a New York time consciousness at informal local watering holes, such as the roadside Max’s Conch Bar. We settle under a thatch canopy out back, adjacent to a table displaying driftwood, conch shells, dried sponges and other sea objects. Seated beside us for lunch is Igor Liberti, who, at the AIDA Freediving World Championships that morning, broke the Swiss record (253 feet) at Deans Blue Hole, another Long Island feature. Heralded as one of the deepest ocean holes in the world, Deans plunges some 663 feet into a tranquil bay ringed by a crescent of sand.
Taking one of the old bicycles Stella Maris keeps on the property, we pedal towards a series of four isolated sands referred to as Love Beaches. First, the lane leads to natural rock pools where one can bathe protected from the pounding surf beyond. We park our bikes farther along the sandy track and climb across the rugged limestone bluffs to access the four compact beaches (each untainted by footprints) as well as a beached 21st century shipwreck. 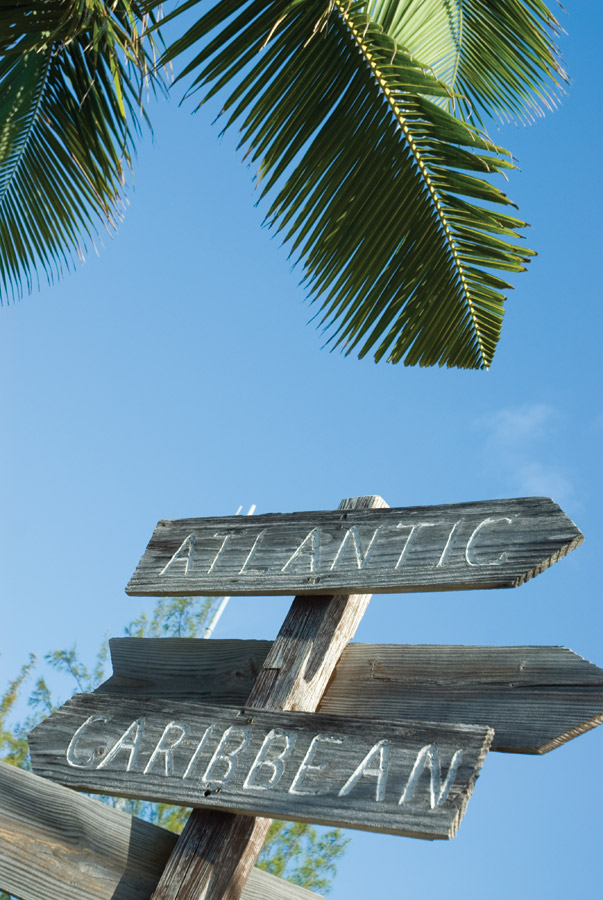 Long Island is also lauded for its bonefishing in the flats near Stella Maris, and Ted is determined to reel in a prize specimen, but not at the astronomical half-day rates ($400+) advertised. Instead, we follow a chance encounter, the norm on Long Island, when in the Stella Maris parking lot, we discover that Alvin Smith, a taxi driver, is also a fishing guide. “The fish, they know me,” he declares. He speaks with such authority that his demeanor and an economical price convince Ted this is “the man” to help him nab a trophy specimen. The next day, Ted learns how to stalk the sometimes-elusive bonefish without spooking them. “Walk quietly by picking up your feet; don’t splash around; and make sure your reel isn’t noisy,” says Alvin, who confirms that bonefish spook easily. Ted doesn’t catch anything—sharks in the area were (yes, you guessed it) spooking the bonefish—but it’s another reason to make a return visit to Long Island.

Our last morning is spent exploring the environs around Stella Maris, which occupies the expanse of a former 18th century cotton plantation. The ruins of the old Adderley Plantation are close to the resort’s entrance, accessed along a leeward beach that offers a botanical education, thanks to a path hemmed in by native plants and labeled with their uses: The buttonwood can treat diabetes, jumbey is good for gas and the red mangrove is used for backaches. Veering to the interior, the trail opens up to a picnic table set among the ruins of several stone buildings. It’s easy to spend an hour examining the medicinal plants and stone remains, and contemplating the still-present Long Island of centuries ago.

Long Island Breeze Resort, longislandbreezeresort.com
The best option at this petite harborfront property is the one-bedroom deluxe apartment (complete with a four-poster bed) on the top floor of the ocean-view cottage.

Cape Santa Maria Beach Resort, capesantamaria.com
The island’s most upscale accommodation provides guests with the choice of staying in either beachfront bungalows or two-bedroom villas, which come with jetted spas.

Gems at Paradise, gemsatparadise.com
Positioned on a hilltop among expansive lawns high above the water, this accommodation is located on the less traveled south end of the island.