Fans of The Band might be wondering of late whatever happened to the group’s guitarist and principal songwriter Robbie Robertson. His group famously ended its career with what many consider the greatest film on rock music ever made—The Last Waltz, a 1978 classic that continues to influence musicians. Yet, since 1998, Robertson has not released any albums of his own. His first four solo albums garnered unanimous praise and many were surprised by Robertson’s confident vocals, considering he usually left the singing to bandmates Levon Helm, Rick Danko and Richard Manuel (the fifth member, Garth Hudson, played keyboards). Still, he’s been extremely busy.

For twenty years, Robertson put his celebrated composing skills to good use, writing and producing film scores primarily for director of The Last Waltz and good friend, Martin Scorsese. Beginning with Raging Bull, Robertson worked on such Scorsese films as The King of Comedy, The Color of Money, Casino, Gangs of New York, The Departed and Shutter Island. He also worked on films with Taylor Hackford, Barry Levinson and Oliver Stone, and as an actor and film narrator. Additionally, he worked in music behind the scenes as an executive at Dreamworks Records and as a key member of the Rock & Roll Hall of Fame Nominating Committee, the Ahmet Ertegun Selection Committee and the Recording Excellence Selection Committee. Although he has made the occasional live television appearance and guest spots on such one-off performances as Eric Clapton’s Crossroads Guitar Festival concerts, he still does not tour.

Exactly twenty years ago, when Robertson released his 1991 album Storyville, we met in a spacious, top-floor suite at Manhattan’s Ritz-Carlton. Robertson was subdued and initially distracted when we began talking back then; a vintage performance of the Duke Ellington band, featuring Johnny Hodges, played on a television in the background. The person I talked to this time around was completely different. Robertson was jazzed about the events of the previous evening. The Gagosian Gallery held a launch for his newest solo album, How To Become Clairvoyant (Macrobiotic/429). The launch was held at this venerable art gallery because a special edition release of the album features prints by artists who contributed to the project, including Richard Prince and Sante D’Orazio. After the launch, Jann Wenner of Rolling Stone magazine held a party for Robertson filled with artists from the world of film (Robert De Niro) and music (Bruce Springsteen).

Robertson was still talking about the night before and planning to leave for New Orleans after our interview. His trip would include interviewing Fats Domino, Jerry Lee Lewis, Chuck Berry and Little Richard for a film to become part of the Rock & Roll Hall of Fame archives. “It’s just a thrilling thing,” Robertson began about meeting these founding fathers of rock, his deep voice still revealing inflections of his Canadian upbringing. “We’ve got to get these guys to tell the real story of rock & roll while they’re still here. There will be instruments around if they feel like playing music. I’m most interested in the stories.” Robertson said with a laugh that he can’t wait to ask the question, “Which one of you guys started rock & roll?” 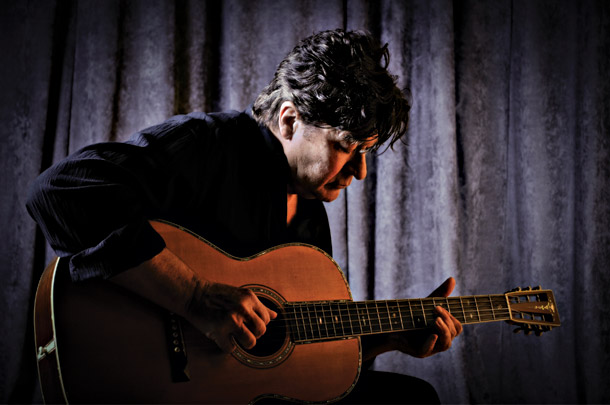 Robertson, an inductee of the Rock & Roll Hall of Fame, collaborated on his latest solo album with another Hall member, Eric Clapton. While the two have performed together before (including in The Last Waltz) and written songs together, this project is their most intimate collaboration to date. “He is a dear old friend of mine,” Robertson began, “and somebody that I admire tremendously on a music level and on a personal level. He said, ‘Well, listen, why don’t you just come to London and let’s go in the studio and see what happens?’ We’ve been talking about doing this for ages. We’ve worked together and done things over the years, but not like really get in the trenches together like that. We had such a fantastic time. It was just a magical thing. It was one of the best-feeling recording experiences I’ve had in my life and I’ve had a few. Then [Steve] Winwood came in and helped, and it felt like we’d been doing this together for years. We were able to just click so quickly.” Robertson became a bit emotional when actually remembering how long he’s known Steve Winwood. “I’ve known Winwood longer than I’ve known Eric. I met him when I was on tour with Bob Dylan during that famous tour in 1966. I met Eric after [Music From] Big Pink came out in ‘68.”

Robertson continued to talk about how the album progressed. “We just had a great time and then after we did the recording, Eric said, ‘Well, this has just turned out fantastic. You need to go and do your thing now and finish this thing up.’ When I came back, I had to put it aside because I promised Scorsese that I would work on Shutter Island.” For the work he did composing this film score, Robertson immersed himself in the world of modern classical music and “thrived on the learning experience.” As for eventually picking up the thread of the new album, he said it “was such a luxury to let the dust settle and come back and decide I want Trent Reznor, Tom Morello, Robert Randolph…I was able to cast these people in this like you would a movie. I was still in movie mode because I had just finished Shutter Island.”

A special two-cd edition, with 10 bonus tracks, gives fans a chance to really see how the songs unfold. Robertson described the bonus tracks as “really intimate portraits” and elaborated by saying, “It’s like a painter does something, but, where did it come from? What was the idea that sparked this?” Robertson explained the bonus tracks further, saying it was “Eric and me with just two guitars in front of one another, with a couple of microphones, writing on the spot and doing something that makes us think this is going somewhere. This is something we’ve got to follow through on.”

The new cd is a real breakthrough for Robertson, as it contains songs of a very personal nature. Robertson normally writes like a novelist or a playwright, creating characters and telling a story. When I pointed out that he seemed to be looking back on his own life and time with The Band and Bob Dylan, he said, “I’ve never known how to do that before. I can write stories about fictional characters. I love the whole mythology thing and I love contributing to mythologies. These reflections just felt so comfortable. I think I’m at a time in my life that those reflections for me are ok now. It used to be that wasn’t ok with me. I felt like I didn’t want to write ‘me’ songs. John Lennon could do it, but not many people could… Reflection becomes a heartfelt thing,” he stated. “All the experiences…if I don’t share them with people, what good are they?”

Throughout our time together, Robertson seemed more animated than any time we’d spoken before. As we were winding down our conversation, we talked about The Last Waltz, of which he is still so proud. He spoke about the impetus for the project. “I wanted to do something that hopefully had a timeless quality to it. It’s why I chose Martin Scorsese. I thought we could go to a deeper place on this and do something that people hadn’t done before, especially considering that I really disliked rock documentaries. I found them boring and I wanted to do something about that. I would talk to Scorsese and I was like ‘I don’t like any of these movies, any of these music films.’ I like some great musicals though. I love watching West Side Story, Singin’ In The Rain. I like music films. I just don’t like these other ones with the grainy, jittery look.” It was Scorsese who suggested how to make the film. “He said, ‘We got to do it in 35mm. We got to do this like a movie.’ And I said, ‘Now we’re talking.’ So, our ambitions and imaginations just grew. I’m so glad I did that. All the pieces fit together. It was absolutely a project that while you were doing it you felt the gods were on your side.”