When was the last time you ate a chocolate bar? Yesterday? Ten minutes ago? Chances are, chocolate entered your life when you were a small child and has remained a constant companion. The modern world is abundantly familiar with chocolate. Chocolate bars, chocolate cakes, chocolate brownies…the list is endless. But these indulgent desserts are just one facet of the complete story of chocolate, a story beginning thousands of years ago in the ancient Americas.

Food of the Gods
The creation myth of the Mayans, the peoples of modern-day Mexico/Central America (called Mesoamericans) placed cacao among the first foodstuffs of the first humans. These seeds, also known as cocoa beans, are contained in pods that grow on trees native to that area. And after being fermented, dried, roasted, de-shelled and ground, cocoa beans are transformed into chocolate. When officially named by 18th century taxonomist Carl Linnaeus, the cacao tree was dubbed Theobroma cacao, “food of the gods.”

In its ancient guises, chocolate was mostly used as a religious sacrament. According to Mark J. Sciscenti, Chocolate Historian and Artisan Chocolatier at World Tree Chocolates in Santa Fe, NM, “Mesoamericans considered the cacao tree and chocolate to be quite sacred, as the food of the gods and a gift from the gods. Chocolate was consumed only in a ritual and ceremonial manner, primarily by the ruling elites, warriors and wealthy tradesmen, and only under these circumstances—chocolate was not an everyday food.” It was also used “to express love, to cement relationships and trade agreements and as a token of friendship and respect,” Sciscenti explained. He sees this as the “one commonality between ancient and modern times in the use of chocolate.” Witness the National Confectioners Association estimate that in the US, around $750 million was spent on chocolate for loved ones on the occasion of Valentine’s Day, 2010.

The modern, solid form of chocolate might have been perplexing to the ancients. For most of its 4,000-year history, chocolate was consumed in liquid form, with the earliest evidence recently found as residue in a vessel dated to 1150 BC in the Central American state of Honduras. Anthropologist/archaeologist and chocolate scholar Rosemary Joyce from the University of California, Berkeley was a member of the team who made the discovery and characterizes the drink as “frothy, bitter, usually unsweetened and not alcoholic,” although alcoholic chocolate beverages show up later in the historical record.

As “BCE” turned to “CE” (the new way of saying “BC” and “AD”) cultivation of cacao trees skyrocketed and cocoa beans soon became a valued commodity, especially in the Mesoamerican Aztec civilization, where they were used as currency and for barter. Conquistador Hernando de Oviedo y Valdez, who was among the first Spanish colonists of the Americas in 1513, reported that four cocoa beans would buy a rabbit for dinner, ten would acquire the services of a prostitute and 100 was the asking price of a slave.

The Old World Discovers Chocolate
European contact would be the next big step in chocolate’s evolution. The first European to encounter cocoa beans was Christopher Columbus on his fourth and final voyage to the West in 1502. He discovered them in a cache in the vicinity of Honduras. Subsequent Spanish colonists gave the still-bitter drink a try and came up with the idea (attributed to notorious Conquistador Hernán Cortés) to add sugar to the mix, creating a sweet-tasting drink, and thus sweetness and chocolate were forever intertwined. Due to the efforts of the Spanish, and particularly missionary priests, chocolate became a European indulgence, providing a bit of a jolt, as Scisenti notes. He declared that chocolate beat coffee as “the first stimulant encountered by the Europeans…up until then, Europeans were consuming only sedatives like beer, mead and wine.” And it was these stimulant properties that led to chocolate being used medicinally in both the pre-Columbian Americas and Europe. 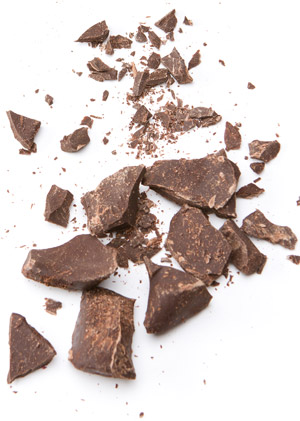 As colonialism of the Americas changed its landscape forever, chocolate became a valued commodity in the Old World. Mainland European chocolate consumption was typically kept to the aristocracy, but in the 1650s, coffee/chocolate houses were established in England and chocolate “was readily available to any comers who could afford it,” as Sciscenti puts it. And the cacao tree began a journey to the other side of the globe. In this massive cultivation drive, it became apparent to these pioneering farmers that the cacao tree is a thoroughly tropical organism and quite fragile, so it must be kept in ideal conditions to survive and thrive: On land within 10 degrees north or south of the equator with lots of rain, shaded sunlight and loose soil.

Modern Chocolate Arrives
Chocolate as we know it today stems from a series of innovations in the 19th century when the basic elements of chocolate, cocoa solids and cocoa butter, were first examined by curious scientists. Refinement of the cocoa solids resulted in cocoa powder. In 1847, English chocolate maker Joseph Storrs Fry invented the chocolate bar (which would be considered dark chocolate by today’s nomenclature), by combining cocoa powder, sugar and melted cocoa butter and pouring it into a mold. In 1879, Swiss chocolate manufacturers Daniel Peter and Henri Nestlé added powdered milk to this mix, thus creating milk chocolate. The advent of conching and tempering processing techniques vastly improved chocolate’s texture and mass manufacturing spurred by the Industrial Revolution made chocolate accessible to every level of society.

It’s Actually Good For You
You would think that chocolate isn’t exactly good for you, but recent scientific research has revealed compounds in chocolate that promote health. Dr. Mindy Haar, Director of Clinical Nutrition at the New York Institute of Technology in Old Westbury cites flavonols, a compound that naturally occurs in cocoa beans. Dr. Haar says that flavonols “may act as antioxidants, which work against free radical formation and may act to reduce cell inflammation.” Also, preliminary studies have shown that chocolate helps lower blood pressure and reduces the risk of cardiovascular disease.

But only if you eat the right type and serving of chocolate. The milk in milk chocolate is thought to counteract chocolate’s flavonols, and the unhealthiness of the added sugar and fat is well documented. Dr. Haar’s recommended serving is “One ounce of dark chocolate with 70% cocoa…Using unsweetened cocoa powder in recipes where you control the sugar and fat is also recommended.”

A Different Type of Decadence
ealthy compounds in chocolate can also benefit the surface of the skin. Shanan Burke Lead, Aesthetician at Spa Exo’tique in Selden, explained that the “powerful” antioxidants found in chocolate help “[increase] blood flow and hydration, calming and soothing the skin.” William J. Ferro, Licensed Massage Therapist and owner of Desert Rose Massage and Spa, a business that provides massage and spa services to many top LI hotels declares chocolate to be “a very therapeutic treatment for the skin,” and the Desert Rose Signature Treatment is a tour-de-force of spa decadence, with a full body chocolate salt scrub to exfoliate the skin, a chocolate body mask and a 60 minute full body massage with chocolate oil, capped off by an application of chocolate shea butter as a moisturizer.

Lead specified that chocolate used in spa treatments “should preferably be dark chocolate and unrefined” and emphasized that the chocolate beauty concoctions should be made from “all natural ingredients.”

Chocolate isn’t necessarily an indispensable element in the spa, and Lead admits, “The fact that chocolate smells delicious has a lot to do with why people love to use it in spa treatments.” She says that spa patrons “will comment that they want to eat the chocolate during the treatment.”

And no, chocolate does not cause acne. According to the American Academy of Dermatology, the most prestigious dermatology group in the US, “Extensive scientific studies have not found a connection between diet and acne. In other words, food does not cause acne.” Acne is actually caused by excessive skin oil production brought on by hormone surges.

For Better or Worse
The end product might be delicious, but there are major issues of many types in the area of cacao tree cultivation. The World Cocoa Foundation puts the amount of cocoa beans produced worldwide on an annual basis at 3 million tons. 70% coming from the West African states of Côte d’Ivoire and Ghana and the remaining 30% from Indonesia and, of course, cacao’s ancestral home in the Americas. An issue with taking chocolate so far afield is the disruption of the synergy between the plant and the surrounding fauna. Joyce notes that in its beginnings in Mesoamerica, “chocolate was cared for in plantations that were integrated into local ecologies…small midges [insects] that pollinate cacao bred in the leaf litter around plants.” These insects did not follow the cacao tree’s odyssey around the world, so cacao tree cultivation outside of its true home is, as Joyce puts it, “ecologically hard on the environment.” Rainforests are also being destroyed to make room for cacao trees, with Africa and Indonesia clearing at minimum the same area as 25 football fields of rainforest each year, according to Scisenti.

Food for thought when you unwrap that next candy bar.

Conching: Agitation of the chocolate mass from a few hours to a few days to evenly distribute the cocoa butter, evoke flavor through frictional heat and make cocoa and sugar particles smaller, producing a smoother texture.

Tempering: Controlled melting and solidification of the chocolate to make the cocoa butter crystals into a uniform size, ideally a size that gives the resulting chocolate bar a nice sheen and a good “snap” when broken.