Lawson Pub in Oceanside is a neighborhood hangout that deservedly draws more than locals. It proves that an unpretentious, unfussy venue can be a destination restaurant as well.

For chef/owner Joseph Bonacore, it’s a nostalgic return to his well-remembered past. Bonacore, who recently sold his interest in the super successful Sole in Oceanside, worked as a teenager at the original Lawson Pub in the seventies. It closed in the mid nineties when the space took on a new identity. Now he has returned to the digs that launched his culinary career. The revived Lawson Pub is a relaxed, easygoing, noisy spot that creates a vibe of informal inventiveness. Its menu offers an inspired mix of the obvious (shrimp cocktail, burgers, pastas, etc.) and the slightly unusual (lobster sliders, shrimp Parmesan sliders, grilled chicken paillard nicoise, etc.) without striving for novelty (every bottle of wine at $20 doesn’t hurt either).

Although many of his dishes have a home-cooked feel, Lawson Pub, despite its lively, at times roaring, bar scene is no mug-and-grub joint. Mr. Bonacore is an astute, sensitive observer of culinary trends. In other words, he knows what people want to eat. He proved that at Sole and is repeating his success at Lawson Pub. 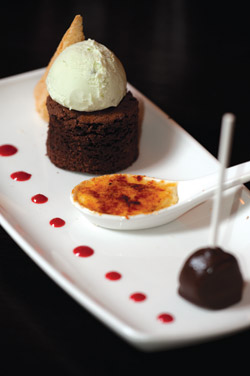 His generously-portioned appetizers seem designed to be shared. The potato chips discretely topped with white truffle and Asiago ($6.95) are enough for four diners. The numerous Little Piggies ($6.95) or superior pigs in a blanket are encased in a light, flaky wrapper and are accompanied by three unlikely dipping sauces: Bacon ketchup, Heineken honey mustard and a rather weird chipotle applesauce. Both sliders (two for $11.95), the lobster and the filet mignon are substantial parcels of satisfaction. The first is given a creative twist by its layer of bacon, tomatoes and organic greens, while the filet mignon is a mix of meat, onions, roasted peppers and manchego with bleu cheese slaw. Both were understandably devoured in seconds (but the stale, cold rolls weren’t).

People who like a small, sweet, but not gargantuan dessert, will relish the housemade mini indulgences ($2.95) at meal’s end. The three rich chocolate covered banana lollipops are especially recommended.