We human beings have been hanging around mountains for thousands of years. Some of us hang around for the scenery and some of us to chill or to play. Some members of our tribe make the mountain sojourn to reflect on the fears that shackle us, those sometimes heavy burdens that weigh us down. And then there are those who go to the mountains to shatter fears and shed burdens.

The Seneca have an old saying about courage: It is not because things are difficult that we do not dare. It is because we do not dare that they are difficult. More recently, our very own cowboy/poet/philosopher John Wayne once expounded that courage is being scared to death…and saddling up anyway. I’m reminded of the latter because it’s written on the wristband given to me when I registered for the Skyrider Tour, which is, incidentally, billed as: “The longest, fastest and highest Zipline Tour in North America and the second largest in the world.” The Skyrider Tour is part of New York Zipline Adventure Tours at Hunter Mountain. There are other less extreme jaunts, like the “family-friendly” Mid-Mountain Tour or the Adventure Tower, but those are not on today’s agenda. Today’s itinerary involves being 600 feet in the air and traveling at 55 miles per hour for more than a minute. Today, we’re jumping off the side of a mountain. It’s probably a good time to mention that I’m not too fond of heights. “Breathe,” our tour guide prompts. “It’s good for you.” 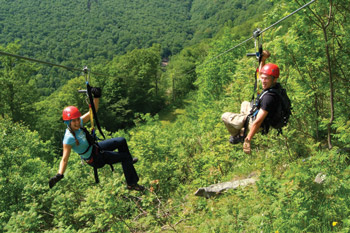 For readers who may not know, the idea of a Zipline Adventure Tour is this: Go flying through the air high above the ground, compliments of a cable, a pulley (to which you are securely harnessed) and the blissful combination of gravity and aerodynamic maneuvering. It doesn’t take much skill, but it does take a short training session for safety’s sake and a bit of bravery to make that first leap. And what an amazing leap it is.

The idea of the zipline-as-incredibly-exhilarating-outdoor-activity started, according to our guides, in Costa Rica when scientists set up an elevated “lab” of sorts comprising a system of cables. High in the air, the scientists could study trees in a way they could never do on the ground. When the scientists were done with their research, they left the cables up and the locals who helped build them created what now seems like the coolest recycling project ever.

Owner Bradd Morse, a seemingly modest and soft-spoken man, keeps the Zipline Adventure Tours at Hunter Mountain open year round and mentions that he sees many Long Islanders come through its doors. While the foliage associated with the in between seasons is gorgeous and the summer zips across the mountain and over its celebrated music festivals (Google “Mountain Jam”) are, well, intoxicating, it’s the idea of the winter zip that gets our tour guides/prophets Doug Thies and Joe Burke excited. “You can see three days into the future,” Doug says. ziplinenewyork.com