While Visual Heritage III: 4 Contemporary Artists comprises the work of four African American artists in celebration of Black History Month, it is also, paradoxically, a show about artists who transcend the “black artist” label.

Now in its third year, the Visual Heritage exhibition has officially become an annual event at the Southampton Cultural Center’s Levitas Center for the Arts. Arlene Bujese, curator of all three installments, is well acquainted with the complexities of mounting such a show. “Art should stand on its own as art,” Bujese said, though she also acknowledged the importance of celebrating Black History Month.

This year’s lineup of artists includes abstractionists Frank Wimberley, Nanette Carter, Danny Simmons and Sheila Batiste. “None of them really has work that makes it black art,” Bujese said. “That’s the thing.” The curator pointed out that the four artists have very different work from one another, and the varied styles make for an excellent show. All four artists also have connections to the East End. “I tried to keep it as local as possible,” Bujese said, noting that Wimberley is a part time resident of Sag Harbor, Carter is a frequent visitor and Batiste lives full time in the former whaling port. Simmons stays with his brother Russell in East Hampton nearly every weekend. 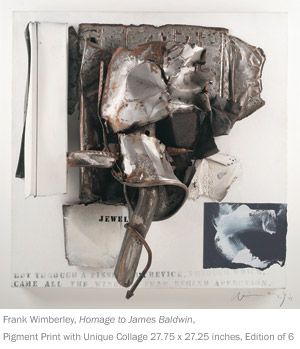 An abstract expressionist painter known for his rich acrylic canvasses with heavy impasto and strong, deliberate strokes, Wimberley, 85, is displaying five pigment-prints with unique collage and paint applications. The prints are taken from the painter’s collage work and photographs of two found-object assemblages, “Drums of Ignacio Berroa” and “Homage to James Baldwin,” which will also be on view. The latter piece, honoring the author of Notes of a Native Son, is a simple, yet striking composition using battered raw-metal car parts, rusting on the edges, aluminum scraps painted white and a stenciled Baldwin quote along the bottom. The focus on Baldwin makes it Wimberley’s only work in the show to deliberately speak about black people or issues. “That’s about as political as I get,” the artist said, adding, “I try to be an American artist first and foremost.”

Carter, a longtime friend and colleague of Wimberley, said her series of abstract floral bouquets are about the decay of modern culture, while also paying tribute to her late mentor and friend Alvin Loving, a prolific American artist who died at 70 years old in 2005. “Civility is waning,” she said, questioning what is supposed to be entertainment in America. “I never thought I’d see women on TV beating each other up.” Carter calls her work a “gesture of a loving offering” in an age when it’s really needed.

The bouquets are constructed of Mylar scraps, layered and painted with oils and graphite, with a palette of black, yellow, green and blue. None of the shapes in Carter’s work represent real flora, and they more closely resemble coral, sponges and anemones, than roses or violets. The overall shapes follow contours similar to tribal masks. 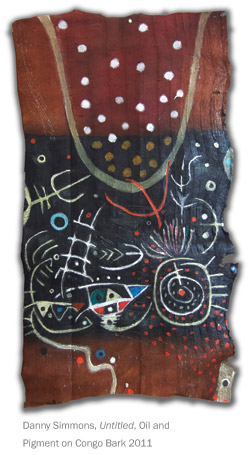 Simmons, who has shown with Carter for many years, commented that there was once a need to exhibit black artists, when the galleries were more segregated, but the art world is more homogenous today. “I’m not a big fan of Black History Month shows,” Simmons said. On the other hand, “The opportunity to show with these great artists is amazing.”

The 58-year-old artist and gallerist is well known for his abstract paintings. For Visual Heritage, Simmons is displaying 12 works, including a series of “bark paintings” and several monoprints. “I’m sort of in a transitional period right now,” he said, explaining the new pieces. The bark paintings are on a scarce and difficult-to-acquire tree bark collected by Pygmy people in the Congo. “It is a little more tribal than the abstract work I was showing,” Simmons said of the rough-hewn bark pieces, which are covered in invented glyphs, reminiscent of indigenous tribal markings.

Simmons said the marks reference tribal spiritual symbols, and that the abstract and the spiritual go hand-in-hand. As soon as he began working on it, the artist felt a connection to the bark and it took his painting to a transcendental place. “It’s really strange and wonderful. It seems like it has magical properties,” Simmons said of his new medium. 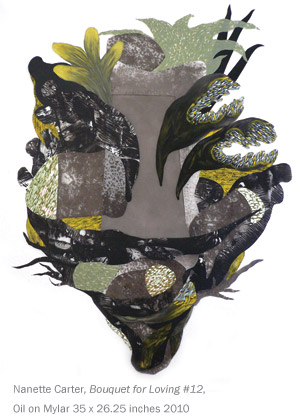 While the bark paintings are clearly connected to Africa, Sheila Batiste, an art teacher in the East Hampton School District has included the only work that directly speaks about the experiences of black people in America. Like her counterparts in the show, Batiste said she is an artist before she is a female or black artist, but she acknowledged that her ethnicity could be evident in the work. “It reflects my experiences, which would be very unique to someone who is black,” she said.

Batiste is showing wire sculptures she calls “wire drawings,” based on previous two-dimensional work in various media. The wires twist together and climb up from the floor in thin metal spires. Batiste then returns to two-dimensional media and traces the shadows cast by each sculpture. Also included is a tabletop book from her show, What’s Gold About the Gold in Goldsboro, which chronicles Batiste’s time growing up in North Carolina during the Civil Rights movement.

Visual Heritage III: 4 Contemporary American Artists is showing through February 29. A reception is planned for Saturday, February 4 from 4-6pm. Danny Simmons will read poetry and sign his new book Deep in Your Best Reflection at 2:30pm and curator Arlene Bujese will give a gallery talk.