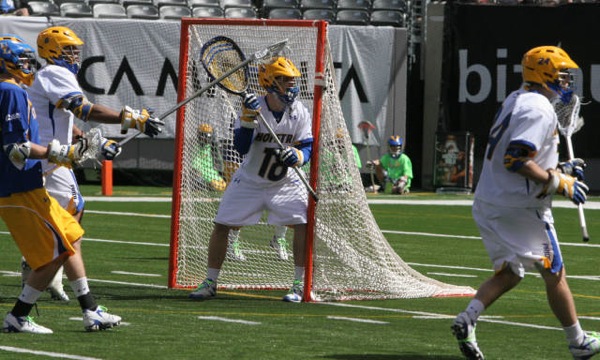 Hofstra senior goalie Andrew Gvozden has been selected as a candidate for the 2012 Lowe’s Senior CLASS Award. Gvozden is one of 20 candidates selected who excel both on and off the field.

An acronym for Celebrating Loyalty and Achievement for Staying in School®, the Lowe’s Senior CLASS Award focuses on the total student-athlete and encourages students to use their platform in athletics to make a positive impact as leaders in their communities.

To be eligible for the award, a student-athlete must be classified as an NCAA Division I senior and have notable achievements in four areas of excellence – community, classroom, character and competition.

Gvozden, a native of Millersville, Maryland, was a USILA All-America honorable mention in 2011 after leading the nation in goals against average (6.00 GAA) and placing third in save percentage (.602). He was also named to the All-Colonial Athletic Association second team. The 2012 Pride co-Captain, who will be starting for his fourth year, has a 26-9 career record.

Gvozden maintains a 3.47 GPA in Entrepreneurship (Business) with a minor in Information Technology. He’s a three-year member of both the Hofstra Dean’s List and Hofstra Athletics Academic Honor Roll, as well as a three-year recipient of the CAA Commissioner’s Academic Award.

Gvozden is a team leader in community-relations activities and has been cited for excellence at The Program leadership exercise. Gvozden has served as a team leader in volunteer efforts for Holiday Magic for underprivileged children (2008-11), Long Island Coalition for the Homeless’ Walk for the Homeless (2008-11) and the Firefighter Stephen Siller World Trade Center Tunnel-to-Towers Charity Run (2010-11). He’s also a Hofstra University academic tutor.

Lowe’s, an official Corporate Partner of the NCAA, will announce the Senior CLASS Award® winner during the 2012 NCAA Division I Men’s Lacrosse Championship, which will be held May 26 and 28 in Boston.