My wife is nearly three months pregnant and we’re going to Barbados.

“Are you sure you want to do this?” I ask her as we pull up to JFK in our taxi. For the past few weeks, she’s barely been able to keep food down, she’s been sleeping more than ever and almost everything smells awful to her, including my once “pleasant” breath. 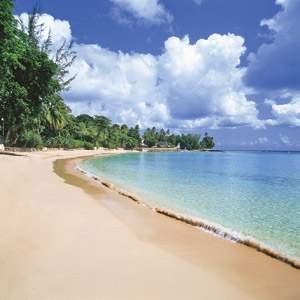 “Of course, we’re here aren’t we?” She’s right; we are here and the tickets are paid for, and our flight leaves in an hour, and I definitely have to write this article. I tip the taxi driver more than usual, grab our bags and we’re off.

From the window, the driver shouts, “Don’t get too much sunshine, you might not come back! And good luck with that pregnancy thing!” She buzzes away, folding back into the morning commute. I don’t recall revealing anything about the pregnancy—maybe I did, it’s still 5am—but I thank her anyway, even if she’s already a few hundred feet away honking, tangled up in traffic.

After a no-nonsense, direct flight via JetBlue that’s jammed with five hours of films, snacks and all the Dunkin Donuts coffee a body can sustain—my wife snoozes most of the flight—we carefully step off the airline, our hands blotting out the broad Bajan sunshine. It’s as if we’ve been hurled into another existence that has nothing to do with the insular winter mindset we’ve now left behind encrusted in snow and ice and the hustle of January New York.

To be honest, the initial transition is a bona fide trial, as our bodies and minds are fiercely resistant to the immaculate weather. I start to think about that tiny nameless thing that’s probably doing flips right now inside my wife’s stomach and wonder if it, too, is roughing the sharp weather shift.

“Are you okay?” I ask my wife, looking at her belly bump, which is still too small to warrant being offered a seat on a subway or a crowded bus.

“How many times are you going to ask me that?”

When our eyes finally acclimate to the Barbadian light and that calming 80-degree air, we notice the palm trees begin to swing and the breeze gently lifts, and an easy, shiny smile awaits us, propped up behind a sign that says: “Mr. and Mrs. Francis.”

We walk toward this gentleman as he politely offers, “Mr. and Mrs. Francis? Welcome to Barbados! Can I take your bags for you?” How does he know who we are? Do I look that lost or just that Irish?

The driver opens the back door and I tell him, “I’m going to sit in the back with her, my wife. She’s pregnant.” My wife pinches my elbow—I’d be lying if I said it didn’t hurt—and the driver flashes this curious smile as if asking, Are you okay, sir?

The hotel is a mere thirty minutes away, giving the driver ample time to espouse the lush natural splendor of this petite island, which runs 21 miles long and 14 miles wide. I like the way the man enunciates, his soft lilt, cheerful, like the landscape we now thread: Pastel chattels shimmer on either side, palms lean like flora under the ocean, lazed street vendors offer fresh coconut and grilled fish, bright-eyed children bounce the streets in their school uniform and every car we pass along the way offers a one-two peppy honk.

“Why’s everyone beeping at you? Is something wrong?” I ask, gripping my wife’s hand.

“No, no, Mr. Francis. They’re just saying, hello,” he says, smiling into the rearview mirror.

“Where we’re from, a honk usually means F-U,” I say, quickly adding, “Have you been to New York?”

He’s never left the West Indies, but it doesn’t bother him at all as he goes on to embrace the inherent beauty of his country. And he does it with the fervor of a child blended with the warm reverence of an elder. He speaks fondly of his nation’s 1966 independence and its enduring colonial British influence, and the various charming churches built along the way—and how the people of Barbados are good people, happy people. 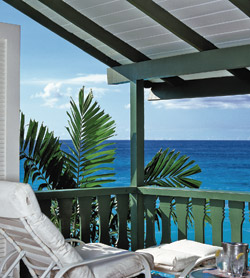 We happen to be staying a five-minute walk from the driver’s hometown, along the Caribbean side, where the fancy hotels and marinas dot the coastline, where tranquil waters sparkle with sunbathers, beach waders and beaming fishermen alike. The driver cranes back to inquire about our itinerary. My wife alludes to a coastal tour, the boat ride, too, and that hopefully we’ll swim everyday.

I add, “Actually, our doctor back home, he’s a very good doctor, one of the best, he said it would be fine for us to swim.”

He laughs, “Mr. Francis, are you pregnant as well?”

My wife laughs and I have to join in. She’s beginning to look better already—the sun, the air, the people—maybe she’ll even eat soon.

The first thing you’ll notice about Cobblers Cove is the authentically kind staff. The second thing is the cool towel and rum punch they immediately place in your hands.

“Oh, thank you, but she can’t have any punch. She’s pregnant, actually,” I enthuse as if providing vital information for anyone that’ll listen.

Randall Wilkie, the General Manager and genteel face of this intimate luxurious estate, hears this and chuckles, when he turns to my wife. “Well, I’m sorry for you, but, please, welcome to Cobblers Cove. Let me know if you need anything. Also, we’ve already arranged for both of your massages, just call later to schedule a time. Let’s show you to your room so you can unpack—and then please enjoy the rest.”

We walk through the hotel grounds, meandering through delicately manicured tropical gardens. The birds flit from branch to bush to sky-blue overhead. In the distance, the quiet thrum of the ocean can be heard lapping methodically upon the sand. Our escort greets every hotel guest along the way to our room and everyone says “hello” back as if they were long-lost friends or even family.

The suites are sumptuous, marrying the tropical comfort of the Caribbean to the crisp elegance of the English aesthetic, all expertly conceptualized by internationally renowned British designer Prue Lane Fox. There are voluminous bedrooms and bathrooms, kitchenettes and an airy living area that extends out to a terrace or balcony. It doesn’t take much to realize why Cobblers has been endorsed by the prestigious Relais & Châteaux, a fraternity of the world’s most distinguished luxury hospitality brands.

When we finally unpack, I’m game for a twenty-minute doze; the traveling has worn me thin. Besides, it might be a good idea for my wife to get some rest before we start the day. And what’s better than the hush of the ocean to cradle you into a slumber? But the shuffling in the bathroom halts and out comes a mint-colored bikini.

“For what?” I was hoping, if not a nap, then maybe something romantic.

We swim for an hour. The water is pristine, revitalizing. New York has become an icy smear and we’ve both worked up a hulking appetite. After a shower, we’re downstairs at the Terrace Restaurant, indulging in what must be the ambrosia of the West Indies: Fine dining framed by the Caribbean shoreline, all prepared with fresh produce by award-winning chef, Brian Porteus. This five-star cuisine is an amalgam of French, Thai, Modern Australian and Middle Eastern influences. And the waitstaff is affable, which makes it even more apparent why guests return yearly. One waiter goes so far as to invite us out to dance that night at a local street festival where they strum country tunes and grill fish into the small hours of the night.

Later, I pull aside that same friendly waiter and say, “I have to tell you something.”

“He’s going to tell you that I’m pregnant,” my wife laughs, and the waiter shows a full face of teeth.

“Well, that’s true,” I say. “But what I planned on saying is that she’s a vegetarian.”

“Oh, that’s no problem, sir. We can make something special if you’d like.” 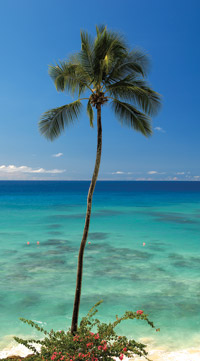 My wife orders a plate of fresh pasta with a side of organic vegetables. I opt for the fresh catch of the day, which is caught by “Barker,” a local fisherman whose yellow boat we spy from our table as he bobs along the crystalline horizon.

“What do you want to do next?” she asks.

There’s the option to snorkel, sail, water ski or windsurf, which is all free here.

“How about we go for a boat ride, instead?”

The sea is serene as we orbit the coastline: Grand hotels, vibrant houses and towering palms stutter the shore. The driver grins through the sunny airstream. My wife’s hands are aloft grabbing at the breeze, while I hang onto the railing, just in case we hit some coral or a wave—so I’d be poised to catch her.

“If you want to hold a railing, it’s behind you,” I shout over the windy racket. She doesn’t respond. Instead, she stands for a moment as if she couldn’t see everything from her seat. The driver suddenly slows the boat for a man who’s drifted away from the shoreline. Apparently, he was set on retrieving his daughter’s floatie when a gust of wind yoked him out to sea.

“Can I give you lift, my man?” the driver casually asks, as if this happens every day.

The swimmer is relieved, replying, “That’d be splendid, friend.” I begin to wonder if this rescue would unravel the same way in New York—but I try to stifle this cynicism. I’m on vacation.

We drop off the rescue victim and skim back to our hotel, a net of birds trail overhead.

“Could he have drowned?” I ask the driver.

“Does that happen a lot?”

“It can. But we got him, my man.” I’m flabbergasted. He just saved someone’s life and now he’s as casual and cheerful as the sun.

We get back to the hotel, change, shower and eat another impeccable meal. I’ve had a few too many glasses off their sweeping wine list—life is good—when I start blathering to the barman.

I speak loud enough so my wife can hear me, too. “All day, I’ve been trying to subtly inform my wife that if she wants to stay pregnant we need to continue to water the flowers as often as we can.”

She nips my elbow. “Don’t listen to anything he says,” she says.

The barman looks befuddled and asks, “And what kind of garden do you have, sir?” He doesn’t get my crack, so I just smile and he smiles back.

“It’s a nice garden—that’s all I know.” I look over at my wife and she grabs my hand.

On the way back to our room, I persuade her to take a detour toward the water. At the shore’s edge, I strip down to my boxers and charge into the dark blue sway.

“What are you doing? You’re going to get us in trouble!” she cries. “I hope you get eaten by a shark, you jerk!”

“Actually, there hasn’t been a single shark attack in the history of Barbados. You think I wouldn’t have looked that up?” I shout back, already doing flips, kicking up the seawater. I’m floating on my back, thinking of that sonogram image again. A giant full moon dangles above. “You know I could live here, right? At this hotel, I mean.”

“You’re crazy,” she hollers from the shore.

For more information about Cobblers Cove in Barbados, visit cobblerscove.com.